As a part of a balanced diet, vegan food is healthier than animal-derived meat when eaten in moderation. Soybean is one of the main ingredients in vegan food. Apart from that, wheat, yeast, and sugar are also used in vegan food. Vegan Food is also a good source of sodium as well as vitamins such as B1, B6, and B2. Due to increasing demand of vegan food, many vegan food manufacture companies such as Beyond Meat Inc., Impossible Foods Inc., and Tofurky Co. have changed their business strategies to increase the market value of their products. They are increasing their production of vegan food and giving discounts on their food products to increase sales, expanding the stores in India, and completing partnerships with the shareholders.

The rising production and consumption of mushrooms such as button mushrooms, oyster mushrooms, and others is also expected to drive the market growth in the coming years. For instance, in November 2022, the Goa-based sustainable startup, ‘Wakao Foods’ launched Jackfruit meat that caters to ‘Ready-to-eat’ and ‘Ready-to-Cook’ products in the Indian market. The jackfruit meat offerings are hot & spicy and American herb sausages are handpicked from farms and hygienically manufactured, which helps to increase the sales of vegan food in the Indian vegan food market.

Increasing demand for vegan food products such as tofu, bread, rice, dry pasta, and others is also boosting the market growth. In August 2021, Piper leaf, a plant-based milk chocolate manufacture company announced to launch of new five flavoring chocolate, Zesty Orange, Classic Coffee, Banana Walnut, Raspberry Cinnamon, and Nut & Raisin in the Indian market. The chocolates are gluten & animal cruelty-free as well as no artificial flavors and additives will be added. The chocolates are 100% naturally made and give healthy alternatives to the consumers. 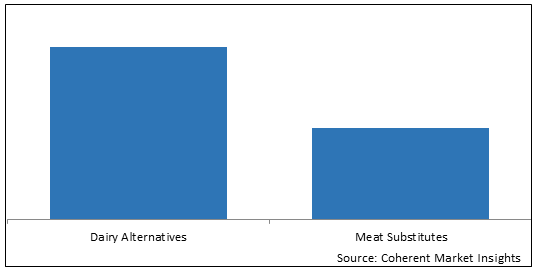 Among product type, dairy alternatives segment held a dominant position in the Indian vegan food market in 2021, accounting for 65.3% market revenue share. Increasing demand of vegan food in India because of its nutritional benefits such as being rich in calcium, antioxidants, and phytonutrients is expected to drive the demand.

Vegan foods are highly processed foods that can restrain market growth. However, they tend to be high in sodium. Vegan foods contain iron, but it is of a 'low-heme' variety, which does not get consumed into the body properly. Therefore, vegans are at a high risk of iron deficiency, which can cause several symptoms such as fatigue.

Growing number of restaurants catering to the vegan community in the country can drive market growth in forecast period. Rising awareness about the medical advantages of vegan food products can boost the market growth. Whereas, an increasing number of lactose intolerant individuals, coupled with the widespread availability of vegan food in the market helps to increase the sale of vegan products. For instance, on April 29, 2021, Upton’s Naturals (the plant-based meat manufacturer) collaborated with Dot Foods, which is the largest food industry redistributor in North America. The new relationship will increase the availability of the brands popular 100% plant based meat alternatives for distributors, restaurants, and foodservice establishments nationwide. 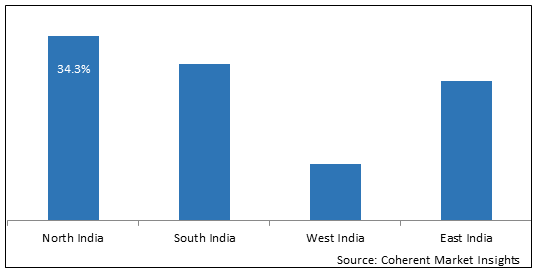 Among sub-regions, North India held a dominant position in the Indian vegan food market in 2021, accounting for 34.3% of the market share. Increasing demand for ready to cook products is expected to drive the market growth. Due to convenience and discounts, online sales channels are more popular in the consumers. Consumers are more attract towards the vegan food by the availability of the different brands such as  Vega Lyfe, The Hershey Company, and Sun Opta Inc.

COVID-19 has positively as well as negatively affected the Indian vegan food market. Due to lockdowns, country banned travelling and shutdown businesses which in turn reduced the economic and industrial growth of the developing countries. Disruption in in the supply chain during the pandemic Indian vegan food market witnessed the lower growth. However, the increased consumption of vegan products during COVID-19 boosted the market growth, as consumers were more concerned about their immune health, energy metabolism, systematic inflammation, weight level, and current lifestyles.

Vegan food is generally healthy and is a popular choice for chefs to add flavor and excitement to their dishes or menus. Most vegan food such as vegan bacon, vegan yogurt, and others have healthy fats, a considerable amount of protein, and fiber. Without any animal cruelty, vegan food offers all the flavor of the food. Thus, it is being incorporated into a variety of ready-to-eat processed food items by food manufacturers. The vegan food market has been growing in recent years due to more people looking for plant-based alternatives to meat and dairy products. In the market there are various vegan food brands are available, most vegan foods are made from soy or seitan and they can be stored in refrigerated sections of grocery shops which helps to increase the sales of vegan food.

The consumption of vegan food products prevent the risk of type-2 diabetes and cardiovascular diseases. For improving the quality of products and increasing demand of customers, the manufactures are using innovative ingredients as well as processes in their products such as ready to eat products which is driving the vegan food market growth during the forecast period. For instance, in March 2022, Indian plant-based dairy startup, ‘One Good’ (Formerly Goodmylk) acquired the domestic nutrition brand ‘PRO2FIT’. The main goal of One Good (Formerly Goodmylk) is to make eco-friendly food choices at affordable prices across India. Furthermore, in December 2020, Ahimsa Food, a plant-based meat manufacturing company developed a Veggie Champ Brand. Under this brand, Ahimsa Food offers curry products such as Vegan Classic Chicken, Mock Mutton, Mock Duck, mock fish fillet, pepper salami, and vegan burgers made with a mixer of soy, milk, wheat protein, mustard, and spices.

What is the Indian vegan food market size and compound annual growth rate (CAGR) of the market during the forecast period (2022-2030)?

The Indian vegan food market was valued at US$ 16.59 Bn and is expected to grow at a CAGR of 8.1% during the forecast period.

Rising production and consumption of mushroom such as button mushroom, oyster mushroom, and others across the globe is expected to drive the market.

Rising awareness about the medical advantages of vegan food is one of the growing trends in the market.