A laser diode or also referred to as a diode laser or injection laser diode is a semiconductor device, in which a diode-injected directly with electrical current can create lasing conditions. It can directly convert electrical energy into light. Laser diodes are most commonly used in fiber-optic communications, laser pointers, barcode readers, laser printing, laser scanning, light beam illumination, disc recording, and more.

In April 2019, high-tech company TRUMPF acquired the photonics business from Philips, which it had announced in December 2018. The acquisition will establish a new business division called TRUMPF Photonic Components, which will be headed up by Lutz Aschke and Joseph Pankert.

In Feb 2021, II-VI Incorporated, one of the leader in engineered materials and optoelectronic components, acquired Coherent, Inc. The purpose of acquisition is to expand the business of photonic solutions, compound semiconductors, and laser technology and systems 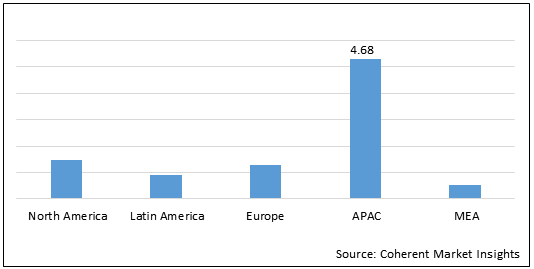 Increasing use of laser diodes in various end-use sectors is expected to drive growth of the global laser diode market during the forecast period. Laser diodes are used in various applications such as communication, factory automation, material processing, data storage, medical sector, display, and sensing. Fiber optical communication industry uses high-speed laser diodes to transmit data over the Internet and telephone networks. The majority of optical fiber networks are powered by distributed feedback laser diodes. Rising demand for high-speed Internet services such as 3G and long Term Evaluation (LTE), and cloud services along with the increasing number of Internet subscribers is leading to the higher deployment of optical fiber networks globally. According to Coherent Market Insights’ analysis, the global Internet population will cross 5 billion by 2020 from 1.7 billion in 2010. Laser diodes have several advantages such as temperature sensitivity, high conversion efficiency, and cost compared to other light sources. As a result of this, the demand and applications of the laser diode have increased massively.

Regulatory compliances making mandatory use of laser technology is expected to propel the global laser diode market growth over the forecast period. Laser is typically used in marking and engraving applications in the industrial sector. Marking is used for marking brand names, price, manufacturing dates, serial numbers, product codes, and other information on various products and materials. The common techniques used for marking are inkjet printing, ink stamping, punching, and laser marking. Laser marking systems offer numerous advantages such as an environment-friendly process and high-quality marks over the other conventional marking techniques.  Furthermore, laser marking does not need any solvent for marking and thus, it helps to reduce the finishing process in manufacturing and is easier to recycle. This makes laser marking preferable over conventional marking techniques. Moreover, several countries such as the U.S. are implementing strict regulatory norms regarding clear labeling, in order to reduce incidents of food poisoning due to the consumption of stale food products.

The laser industry has witnessed increased demand for high power and high brightness lasers from 790 nm to 980 nm. This trend is expected to continue in the next six years with increasing application of high power lasers in material processing, fiber laser pumping, defense, medical, and consumer electronics manufacturing. Given the continuous development of the vertical external-cavity surface-emitting lasers (VECSEL) over the last five years, this technology has proven to be a reliable high power laser source due to its capability to produce tunable output and high brightness along with coherent light generation.

Conventional lasers such as Nd: YAG rod lasers have limited capabilities because of thermal lensing. Thermal lensing is an effect caused due to overheating of the laser crystal, especially in high power lasers. A disk laser is a type of solid-state laser that uses a heat sink, thereby increasing the power and efficiency of the laser. Currently, the disk lasers have not reached any limits in terms of the output power per disk and beam quality. Furthermore, disk lasers offer various advantages such as the efficient conversion of intra-cavity frequency over conventional high power resonator concepts. This is expected to increase the adoption of disk lasers at a substantial rate over the forecast period.

Apart from industrial material processing, medical and marking applications, laser technology is also expected to be used in numerous other applications such as optical disc data storage, laser microchemistry, and dental treatment. Lasers are expected to be widely used in the near future to fulfill data storage requirements. Laser technology can be used for volumetric data storage with higher efficiency than Blu-ray or high-definition digital versatile discs (HD DVDs) and high-definition three dimensional (HD3D) displays. The use of laser technology in disc storage application improves the audio and video quality as compared to the conventional discs. Furthermore, laser technology is also used for such dental treatments as removing dental decay and filling cavities.

Green laser devices or simply laser pointers are one of the most commonly used devices in corporate offices. It is a pen-sized, handheld device with a power source. The green laser can be used for various applications such as pointing devices. It is also sued in laser light shows for entertainment purposes. 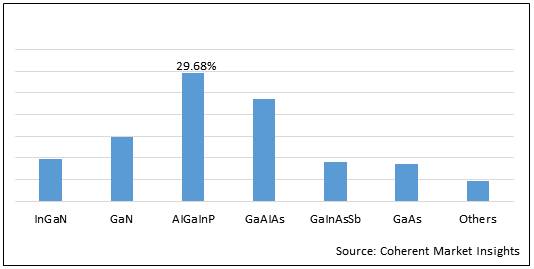 Limitations of laser diodes combined with high initial cost are expected to restrain growth of the global laser diode market during the forecast period. Low output power is a major drawback of laser diodes. Single laser diodes cannot supply sufficient power output required for far deep space communication. Multiple lasers need to be operated simultaneously which increases the cost of the laser system, in order to match the power requirements for such applications. Laser diode output is greatly dependent on temperature and hence, any increase in the temperature translates into higher power losses. Furthermore, laser technology can be used for various processes including cutting, drilling, marking, and other industrial processes. However, high initial costs associated with these machines may pose a challenge for the growth of the laser diode market.

A laser diode is a diaphragm-like semiconductor device like a fluorescent lamp in which an electrode is directly injected with light energy directly to the junction of a diode. Laser diodes will directly emit light into the phosphors of the semiconductor where the current is formed. It is used mainly in the medical field to perform many different applications such as curing an eye infection, sterilizing medical equipment, and eliminating skin growths and scars. It also has many cosmetic uses including removing tattoos. Although there are other methods of removing a tattoo from the skin, these tend to be painful and require several sessions.

Increasing use of high-power laser diodes in autonomous vehicle technologies is expected to boost growth of the global laser diode market during the forecast period. Autonomous vehicles use a novel technology known as LIDAR or light detection and ranging for various purposes to detect objects around a vehicle. The primary advantage of LIDAR is that it can generate accurate 3D images of everything including surrounding vehicles to traffic lights. Light sources such as laser and photosensors such as photodiodes are typically used in LIDAR. Hence, these factors are expected to drive market growth.

Furthermore, rapid growth of the fiber laser market is expected to accelerate growth of the global laser diode market in the near future.

What is projected market size and CAGR of the global laser diode market over the forecast period?

Increasing use of laser diodes in various end-use sectors is expected to drive growth of the market during the forecast period.

What are key opportunities in the market?

High growth in fiber lasers can present lucrative growth opportunities in the market.

What are significant hindering factors in the market?

Growing environment concerns related to the mining of rare earth elements is expected hinder the market growth over the forecast period.

Which region holds dominant position in the market?

Asia Pacific region is expected to hold dominant position in the market in 2021, accounting for 45.65% share.