Stadium LED screen or LED display is a flat panel display that uses a vast number of light-emitting diodes for video displays. The brightness of these LEDs enables them to be used outdoors where they are visible in the sun for billboards and store signs. Stadium LED screens are typically used in concerts, interviews, and mass meetings. LED displays are specifically used by sports clubs, sports marketing companies, and stadium authorities who can get the returns they can pool in through revenue generated by advertisements during matches.

In August 2021, a giant 460sqm screen, flanked by two 230 sqm displays, LED screens by LG were deployed at Wembley Stadium.

In February 2020, Clearglow Sport, a new company was launched. It is a provider of stadium display technology.

Europe region held dominant position in the global LED stadium screens market in 2020, accounting for 33.02% share in terms of volume, followed by North America and Asia Pacific, respectively. The dominant position of Europe is owing to the popularity of games such as football in the region which is played almost throughout the year. 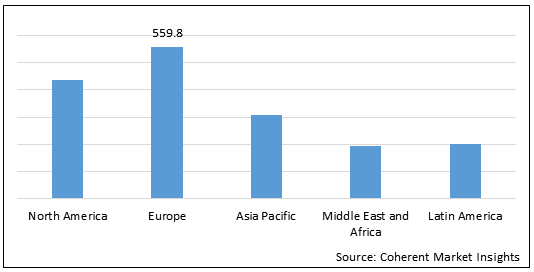 LED displays are deployed in arenas and stadiums incorporate excellent image clarity and contrast with wide-angle visibility for viewers. LED sports displays to use 3-in-1 LED technology, in order to achieve wide visibility by improving the horizontal viewing angle to over 1600. These displays can project one large image to highlight live video and instant replays. Furthermore, LED displays to enhance understanding of the games for viewers more distinctly by introducing player information, live statistics, and status of the game. Hence, these factors are expected to drive growth of the global LED stadium screens market during the forecast period.

LED screens are a major source of revenue for sponsors and operators. This revenue is achieved by promotional activities and brand advertising with the use of different LED displays present at sports venues. Multiple advertisements can be shown at once using LED displays with an improved horizontal viewing angle. On a real-time basis, perimeter LED displays to edit any advertisement, live streams, and perform any scoreboard function with ease in a controlled manner. Furthermore, LED displays to enable sports venues to utilize their perimeter as a fan engagement platform purely for fans in the stadium to deliver promotions or club messages. Therefore, these factors are expected to propel the global LED stadium screens market growth over the forecast period.

Previously, stadium perimeter displays or banner board displays with static graphics were deployed for the purpose of promotional activities in stadiums and arenas. This resulted in the limiting of each display board to promotions of only one advertiser throughout the game. These displays are currently being replaced with LED displays, stadium surrounding displays, and LED scrolling displays, which act as electronic billboards for potential advertisers, facilitating them with a real-time editing facility. This gives stadiums and arenas huge potential for advertising revenues. Hence, stadiums and arenas around the globe are replacing their traditional signboards with LED displays to increase their revenues and operational profits.

Middle East and Africa and Latin America show tremendous opportunities for the LED stadium screens market. This is attributed to the growth of sports activities, the need for customized advertising stadium displays, and the ease of attracting the target audience using LED displays deployed in stadiums and arenas. In the coming years, these regions are expected to provide tremendous growth opportunities to manufacturers and suppliers of LED displays. Companies such as Electro Media International, Daktronics Inc., and Barco N.V. have started installing LED displays products such as video walls, billboards, and other LED displays across various sports events, stadiums, and arenas in countries such as South Africa, Ivory Coast, Nigeria, and Ghana.

Emergence of SMD screens is a key trend

Currently, most indoor stadiums and arenas use LED screens built with SMD technology. An SMD pixel consists of red, green, and blue diodes mounted in a single package (SMD 3-in-1), which is then mounted on the driver PC board. Moreover, SMD LEDs come with smaller sizes, lower power consumption, long life spans, and high brightness. SMD screens are widely adopted for stadium screens as the use of new polyphthalamide and silica gel materials in the manufacturing process make these screens waterproof, dustproof, and moisture-proof. Consequently, they are used in making perimeter displays as they come in direct contact with dust, water, and atmospheric moisture. Moreover, SMD LED displays are also UV resistant.

Discreet screens is another key trend

Discreet LED screens, also known as individually mounted LED displays, are a widely used LED display technology for outdoor stadiums. These displays utilize a group of red, blue, and green diodes that are driven together to form full-color pixels and are usually square in shape. The absolute pixel pitch of these LED displays is measured from center to center of the LEDs used in these displays. The rise in demand for large screens with high viewing distance encourages retailers and commercial buildings to opt for discreet LED displays. 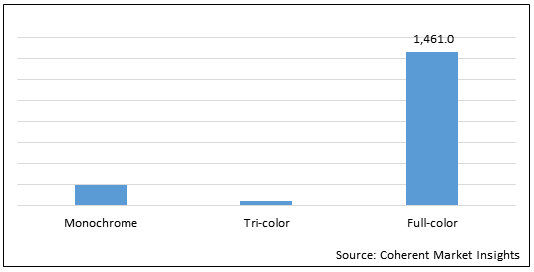 The initial installation cost of LED display is significantly high and it varies with the manufacturer, screen size, and required resolutions. For instance, the cost of a 3x2 m2 LED display ranges from US$ 15,000 to US$ 25,000, which is very expensive compared to conventional displays such as hoarding and banners. The design and production cost of LED displays are major factors that make LED lighting products expensive compared to their conventional counterparts. Furthermore, the complexity of LED lighting products and applications and customization needed could incur additional manufacturing costs. These factors are expected to boost the global LED stadium screens market growth over the forecast period.

Standardization is extremely crucial in such equipment and however, there is not clear standardization at the moment. As a result of this, there are various types of LED stadium displays that may or may not comply with regulatory norms. Therefore, these factors are expected to hinder the global LED stadium screens market growth in the near future.

LED stadium screens are primarily used in large stadiums to enhance the visibility of sporting events. They are most often used for enhancing the visual experience for large-scale sporting events which involve large field size and high technological demands, like professional basketball and rugby. The energy efficiency of these displays makes them cost-effective for venues which host major sporting events. These displays can also help safeguard the safety of the spectators, since they have a low-alloy appearance and do not produce sparks during live games. A large LED display is able to project an image even from several hundred feet away.

LED displays can be used both indoors and outdoors. For indoor venues, like sports arenas and conference rooms, these screens are ideally placed in strategic locations such as in the headrest area of seats. During warm summer days, the light emitted by the panels makes the entire room brighter, reducing the glare on the television sets and chairs. The same effect is achieved indoors when the LED stadium screens and LED video screen panels are lit from behind, while the audience is seated. In addition, the panels allow more natural light to enter the room, thereby helping people enjoy the facility even more.

Launch of new products is expected to propel growth of the global LED stadium screens market over the forecast period. For instance, in September 2021, Barco launched the XDM and XDX RGB projectors thereby expanding its laser projection portfolio with a pair of state-of-the-art RGB projectors.

High demand for improved view experience through visual elements and increasing promotional activities and brand advertising are the factors fuelling growth of the market.

Which is the leading technology segment in the market?

The Individually Mounted segment is the leading technology segment in the market.

High production cost and lack of standardization are factors hindering growth of the market.

Why is the Europe region dominating the market?

Europe region is expected to hold dominant position in the market over the forecast period. The growth of the market in the region is driven by the efforts to phase out conventional screens and replace them with LED screens given its energy-efficiency.