The light diffusion films are excellent material to provide best diffused light used for various purposes. The flash diffuser spreads the light from the flash of a camera. A diffusion filter of this type may also be used in front of a non-flash studio light to soften the light on the scene being shot; such filters are used in still photography, in film lighting, and in stage lighting. In the film and stage industry, a diffusion filter may also be called diffusion gel, or just diffusion. The growing use of camera for the cinematography is driving the market for the light diffuser films. According to the FICCI-EY (Federation of Indian Chambers of Commerce and Industry) report 2021, the media and entertainment business is estimated to grow 25% to reach US$ 23.29 billion in 2021. 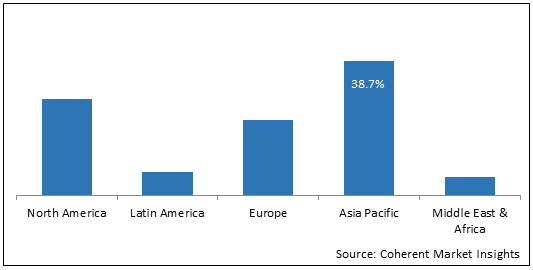 The stringent government regulations owing to the increasing CO2 emission is restricting the adoption of use of plastic in various applications. The pollution created by plastics impacts the environment and causes harm to animals, humans and plants through plastic pollutants. Due to these factors many governments has imposed strict regulations. For instance, of India notifies the Plastic Waste Management Amendment Rules, 2021, prohibiting identified single use plastic items by 2022. The Union government of India has proposed a countrywide ban on single use plastic, one central and many state regulations already exist to ban plastics. The Plastic Waste Management Rules (PWM), 2016 (amended in 2018), banned the use of plastic carry bags below 50 microns' thickness all over the country.

On the basis of applications, in 2021accounted for 45.60% of the revenue share, in the global . These products are projected to remain a preferred choice among the consumers, owing to their low price and easy availability through various channels including brick and mortar stores and e-commerce portals. Light Diffuser Films are specially designed to offer better and more uniform light diffusion across a window or lightbox.  This means that they will diffuse the sun's rays, daylight or artificial light in a more effectively measured way than a standard privacy, solar control or tinted film. 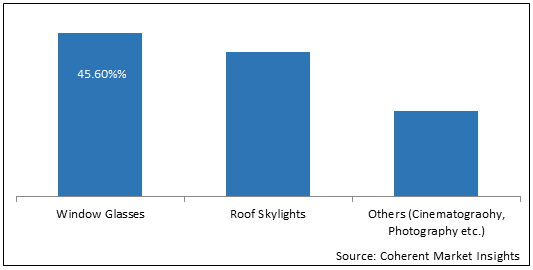 The global market for light diffusion film has been impacted due to the ongoing COVID-19 pandemic. Several governments across the globe have imposed nationwide lockdowns to limit the spread of the virus, which resulted in the shutting down of businesses and ceasing of several economic activities especially building and construction industry. For instance, according to the International Monetary Fund’s 2020 report, the global economy contracted sharply by 3.0% in 2020, which is worse than the 2008-09 financial crisis. Moreover, the supply chain disruption has indirectly led to low demand for the light diffusion film.

Light diffusion film is a multi-layered coated films that is used for light enhancement and protection of the direct lightning and many other purpose. Moreover these films are resistant to heat, moisture, and have high durability against bending and curving, they help in the reduction of light and provide better light control effect which are important for the photography and cinematography where light is an important aspect.

A skylight or roof window can admit more than 3 times as much light as a vertical window of the same size. Skylights and roof windows can thus increase the amenity of internal spaces that might otherwise require artificial lighting or ventilation, such as windowless rooms. The green building sector is the largest consumer of the light diffusion films for roof skylights. According to world green building council, A survey of over 2000 industry professionals revealed there is increasing interest in more sustainable practices within the construction industry. The 2018 Green Building Trends report reveals that global industry leaders are aiming to make at least 60% of their projects sustainable or are investing in renewable energy. The rising concept of green building construction will help to grow the market for light diffusion film as roof skylight.

The global light diffusion material is are polycarbonate, acrylic sheets, polypropylene and other sheet based products. Acrylic and polycarbonate plastic are often recommended for various applications where the material size, weight and strength must be considered.

Acrylic Light Diffusers produce a soft lightning effect by regulating the brightness of harsh lightning. They can also help save energy by offering more even lightning, reducing the need for additional fixtures. Besides, they protect lightning fixtures from dust as well. Bulk polymerization is a process by which acrylic plastic polymers are formed. Batch cell or continuous system processing is used to form the acrylic, depending on the thickness and shape required. Polycarbonate light diffusion films is a light diffuser film that comes in the thickness ranging from 0.5mm to 0.6mm. Polycarbonate light diffusion films are used in LED lights, office lamps and fluorescent lights.

Increasing construction activities across the globe are projected to drive the global light diffusion materials market during the forecast period. For instance, in September 2021, According to Bureau of Labour Statistics, construction is likely to be the most rapidly growing industry across the Light diffusion materials are considered a preferred choice for use in various commercial buildings such as offices and schools, as these materials distribute light evenly and provide a wider viewing angle. Thus, with growth of the construction industry, the demand for light diffusion film is also expected to increase during the forecast period.

What will the light diffusion film market size be in 2030?

The growing demand for the light diffuser film coated windows for the building and construction projects is the major factors that are expected to drive growth of the market.

The use of light diffusing films in the cinematography for the better light dispersion is the key trend in the market.

The stringent government regulation regarding plastic and there usage is the restraining factor for the market.