Ablation is a procedure in which electrical energy, radiofrequency, and others are used for removal or destruction of cancerous cells or tissues in human body. Ablation devices offer a minimally invasive alternative to traditional surgical treatment of arrhythmia (irregular heartbeat) and cancers of prostate, lung, kidney, liver, and others. Cryoablation, also known as cryosurgery is a technique, wherein extreme cold temperature is used to kill cancerous cells in the body. Radiofrequency ablation, also known as radiofrequency neurotomy is a technique, wherein heat generated by radio waves is used to target specific nerves in the nervous system to temporarily block pain signals from nerves to the body. Radiofrequency neurotomy is most commonly used for pain in the neck, knee, back, hips, and others. Diagnostic electrophysiology involves measurement of electrical activity of cells or tissues in the human body to detect diseases or disorders such as arrhythmia, cardiac arrest, and others.

Middle East ablation devices & diagnostic electrophysiology market is estimated to be valued at US$ 24.0 million in 2021 and is expected to exhibit a CAGR of 9.9% over the forecast period (2021-2028). 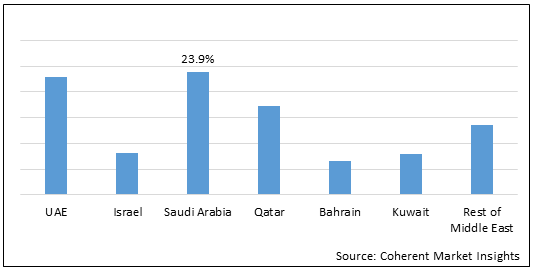 The high incidence of chronic diseases such as stroke, cardiovascular disease, cancer, and others is expected to drive the growth of the Middle East ablation devices & diagnostic electrophysiology market over the forecast period.

For instance, according to an article published by the BMC Cardiovascular Disorder journal in June 2019, based on data collected from 2008 to 2018, it is estimated that the overall incidence rate of major cardiovascular disease (CVD) in United Arab Emirates (UAE) was around 12.7 per 1000 person-years. The same source estimates the incidence rate of CVD to be higher in men i.e. 16.8 per 1000 person-years, as compared to women i.e. 9.0 per 1000 person-years. Moreover, obesity, older age, hypertension, smoking, type 2 diabetes, and chronic kidney disease (CKD) have been found to be the major risk factors associated with CVD in UAE. 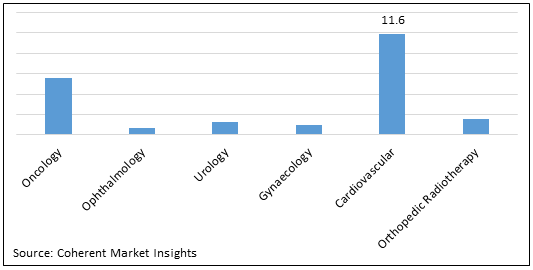 The increasing research and development activities for the development of novel ablation and electrophysiology devices for diagnosis of diseases such as arrhythmia, cardiovascular disease, myocardial infarction, and others is expected to drive the market growth over the forecast period.

Market players are focused on thorough research in the field of ablation devices and cardiac electrophysiology, in order to support innovation in this field. For instance, in July 2018, Cleveland Clinic, a multispecialty hospital situated in Abu Dhabi launched a new online IT (information technology) system to help patients detect early symptoms of heart attack, cardiac arrest, stroke, and other heart diseases. The system collects data from patients’ implantable cardiac devices such as cardiac resynchronization devices, pacemakers, defibrillators, electrocardiography recorder (a diagnostic electrophysiology device), etc. and sends alerts to the doctors of Cleveland Clinic in case of any serious arrhythmia.

The limitations of ablation and electrophysiology devices such as limited volume of tumor elimination, recurrence of cancer, and others are the factors that are expected to hinder growth of the Middle East ablation devices & diagnostic electrophysiology market over the forecast period. For instance, according to data provided by the Radiological Society of North America, Inc. (RSNA) as of February 2021, some of the limitations of radiofrequency and microwave ablation of liver tumor is that only limited volume of tumor can be eliminated and cancer cannot be prevented from growing back using ablation technique.

Electrophysiology is a branch of physiology that studies the electrical activity of biological cells, tissues, or organs. Electrophysiology involves measuring voltage changes or electric current in organs such as heart, brain, and others. Electrophysiological recordings can be performed in the brain to measure the electric activity of neurons and help in diagnosis of brain malfunctioning. The electrophysiology of the brain is also known as electroencephalography (EEG) while that of the heart is known as electrocardiography (ECG). Electrophysiology is widely used in clinical applications such as diagnosis of arrhythmia, heart attack, etc. Ablation is a minimally invasive procedure, wherein energy such as radiofrequency, thermal energy, microwave, and others are used to make small scars in the heart tissue to restore normal heartbeat in case of irregular heartbeat.

For instance, according to the Cancer Country Profile 2020, published by the World Health Organization (WHO), the total number of cancer cases in 2018 in Bahrain were 1,048 with 603 deaths. Moreover, as per the information provided in an article by Journal of Clinical Medicine published in 2021, Saudi Arabia has the highest prevalence of non-communicable diseases (NCDs) such as cancer, cardiovascular disease, and others globally, which account for 73 percent of the country's mortality.

What is the current market size and compound annual growth rate (CAGR) of the Middle East ablation devices & diagnostic electrophysiology market during the forecast period (2021-2028)?

Middle East ablation devices & diagnostic electrophysiology market size is estimated to be valued at US$ 24.0 million in 2021 and is expected to exhibit a CAGR of 9.9% between 2021 and 2028.

Increasing incidence of chronic diseases such as cardiovascular disease, cancer, etc. and research and development activities for the development of novel ablation and diagnostic electrophysiology devices are expected to drive the market growth over the forecast period.

Which is the leading application type segment in the market?

Cardiovascular segment is expected to hold major market share, owing to increasing prevalence of cardiovascular disease during the forecast period.

Saudi Arabia is expected to hold the largest market share in the market.

Major factors hampering growth of the market include limitations of ablation and electrophysiology devices such as limited volume of tumor elimination, recurrence of cancer, and others.