Naloxone is a medication which is mainly used to reverse opioid overdose such as morphine and heroine. Naloxone is an opioid antagonist and the U.S. Food and Drug Administration (FDA) list it under prescription drugs, however some countries such as Italy and Australia have rescheduled it as an over-the-counter (OTC) medication. Naloxone products are available in various strengths. Currently, the available strengths of naloxone include 0.4 mg/ml, 1mg/ml, 0.4mg/0.4ml, 4mg/0.1ml, and others. Naloxone are administrated from different routes such as intranasal, intramuscular/subcutaneous, and intravenous. Intranasal naloxone products are the latest product in market which can be administrated by anyone (non-medical professional). However, intravenous products are mainly administrated by medical professional who are properly trained.

Increasing launches and approval of novel naloxone products by various regulatory bodies is expected to be a major factor aiding in growth of the market over the forecast period. For instance, in January 2017, the U.S. Food and Drug Administration (FDA) approved Adapt Pharma Inc.’s NARCAN Nasal Spray 2 mg formulation for emergency treatment of known or suspected opioid overdose. In 2016, Mylan N.V. launched its naloxone hydrochloride injection USP, 0.4 mg/mL packaged in 1 mL single-dose vials. It is therapeutically equivalent to the naloxone hydrochloride injection 0.4 mg/mL, of Hospira Inc. In September 2017, Mundipharma International Limited received approval from European Medicines Agency (EMA) for its product (intranasal naloxone 1.8 mg) to use in emergency reversal of opioid overdose. 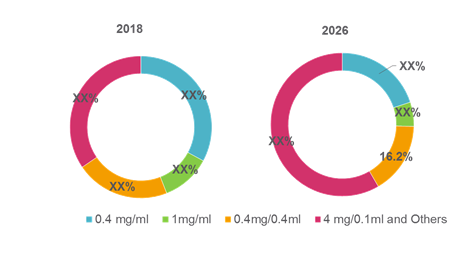 Increasing cases of opioid overdose is expected to increase demand for naloxone products during emergency treatments which in turn will positively drive the global naloxone market growth. For instance, according to the data published by the U.S. Department of Health and Human Services (HHS) in 2016, around 11.5 million people misuse prescription drugs and around 948,000 people use heroin. According to the data published by National Institute on Drug Abuse, 2018, in the U.S., everyday over 115 people die due to opioid overdosing. According to same source, in the U.S. opioid overdose increased by 30% from July 2016 through September 2017 in 52 areas in 45 states. 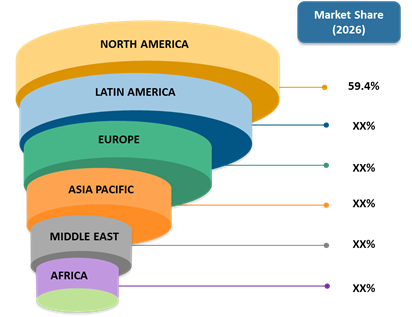 Reimbursement scenario for drugs play a major role in adoption of high cost products in developed regions such as North America and Europe. Therefore, favorable reimbursements for naloxone products is expected to support the adoption of these products. Currently, most types of insurance cover and reimburse for naloxone administered directly in a medical setting.

North America naloxone market is expected to a hold dominant position over the forecast period due to the presence of novel naloxone products such as Narcan nasal spray and EVZIO (naloxone hydrochloride injection), which is still not present in any other region. Furthermore, initiatives taken by various companies and organizations to increase access of naloxone is expected to fuel the market growth. For instance, in February 2018, Loyola Medicine and the Cook County Department of Homeland Security and Emergency Management collaborated, where Loyola Medicine trained police officials to use Narcan in case of opioids overdose. In 2016, Adapt Pharma Limited partnered with Smith Medical Partners, LLC for distribution of free Narcan (Naloxone HCl) nasal spray in all high schools in the U.S.

Furthermore, Europe naloxone market is expected to show significant growth in the near future, owing to increasing approvals of novel naloxone products in the region. For instance, in July 2017, Indivior Inc., a subsidiary of Indivior Plc., received marketing authorization (MA) from French Regulatory Agency ANSM for its new Nalscue naloxone hydrochloride nasal spray indicated for emergency treatment of characterized or suspected opioid overdose in France.

In February 2017, Adapt Pharma Limited filed marketing application for its product Naloxone Hydrochloride (HCl) nasal spray in Europe. Hence, these products when launched in the European market it will drastically fuel market growth in the near future

In 2016, Therapeutic Goods Administration (TGA) placed naloxone on Schedule 3 when used for the treatment of opioid overdose, thus allowing the over-the-counter (OTC) purchase of naloxone in Australia.

According to the data published by Regulatory Affairs Professional Society, naloxone is still not approved by the U.S. FDA as an over-the-counter (OTC) drug. However, some organizations such as Walgreens pharmacies are providing naloxone products over-the-counter in over 5,800 of its 8,200 stores to increase the access of naloxone.

Naloxone is an opioid antagonist used to counter the effects of opioid overdose, such as morphine and heroine. Naloxone is indicated for use in opioid overdose to counteract life-threatening depression of the central nervous system and respiratory system, allowing an overdose victim to breathe normally. Naloxone is non-scheduled prescription medication, which in most cases, is administrated by emergency response personnel or minimally trained personnel, and is thus ideal for treating overdose in people who are prescribed opioid pain medication. Naloxone can be administrated through parenteral route, by injecting in the muscle or vein.

Increasing launches and approval of new naloxone products in the market is expected to drive the global naloxone market growth over the forecast period. In October, 2016 Health Canada approved Narcan Nasal Spray 4 mg for non-prescription, community use in Canada

Rising prevalence of opioid overdose in key regions such as North America, and Europe is expected to drive demand for naloxone products and drive the naloxone market growth in the near future. For instance, according to the data published by European Monitoring Center for Drugs and Drug Addiction (EMCDDA), in 2016, around 150,943 high-risk opioid users were reported in Germany and around 330,445 were reported in the U.K.

Furthermore, initiatives by various government and private organizations to increase access of naloxone product among the population is also expected to drive market growth. For instance, in 2015, Kaleo, Inc. partnered with the Clinton Foundation and provided bulk discounts on its EVZIO to various college universities and public safety organizations.

What are the growth estimates for naloxone market till 2026?

The global naloxone market is estimated to surpass US$ 884.8 Million by 2026

Which are the prominent naloxone market players across the globe?

Which segment based on strength, accounted for the highest demand in the naloxone market?

What are the key factors driving growth of the naloxone market?

Increasing cases of opioid overdose is expected to increase demand for naloxone products during emergency treatments and this is one of the major factors that is expected to propel growth of the market over the forecast period.

What is the Compound Annual Growth Rate (CAGR) of the naloxone market for next 8 years?

The global naloxone market is estimated to exhibit a CAGR of 11.4% over the forecast period.

Which region is dominating the naloxone market growth?

Among regions, North America is expected to hold dominant position in the global naloxone market over the forecast period.

Canine atopic dermatitis (AD) has been defined as a geneti...

Ulcerative colitis is a category of an inflammatory b...

Addiction is a condition of harmful craving to repeatedly ...

Protein phosphorylation is one of the most studied and imp...