Press Release: Renewable Methanol Market to reach around US$ 266.2 million by 2027

Renewable Methanol Market to reach around US$ 266.2 million by 2027

Growing demand for renewable methanol from the automotive industry as a superior liquid motor fuel is expected to present lucrative opportunities to the market. According to the Coherent Market Insights analysis, the total number of passenger transport in Europe is expected to increase by over 35% by 2050 as compared to the current level. Increasing the use of an electric vehicle that is powered by fuels and renewable methanol is used in fuel-cell vehicles. Thus, growth in the automotive industry will favor market growth.

Increasing adoption of advanced and eco-friendly technology for the production of renewable methanol is expected to foster market growth. For instance, in June 2019, Eni and Synhelion, a spin-off of Zurich Polytechnic University (ETHZ), announce the development of new technology for the production of methanol from carbon dioxide (CO2), water and methane. The production of methanol using renewable energy will help Eni to simultaneously work towards the twin targets of greenhouse gas reduction and carbon dioxide usage as raw material. 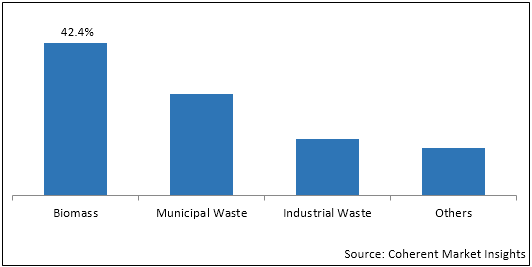 On the basis of primary source in 2019, the biomass segment has accounted the largest market share of 42.4% in terms of value, followed by municipal waste and industrial waste segment respectively.

Partnerships and collaborations are major trend observed in the market due to the growing focus of the manufacturer to expand its product portfolio and presence at the regional and global levels. For instance, in February 2019, Nouryon (formerly AkzoNobel Specialty Chemicals) and Gasunie have entered into a partnership to supply green hydrogen to BioMCN for the production of renewable methanol from CO2, a raw material for biofuels and a variety of chemical feedstocks.

Lack of awareness regarding the benefits of renewable methanol across developing regions is expected to restrict market growth over the forecast period.

What are the major growth driving factors for the renewable methanol market during the forecast period?

Rising demand for renewable methanol as a motor fuel across the transportation industry is projected to augment market growth. Renewable methanol is produced from natural gas, coal and landfill waste, wood waste, and seaweed. It reduces greenhouse emissions by 15–20% as compared to gasoline.

What is the Compound Annual Growth Rate (CAGR) of the market during the forecast period (2020-2027)?

The renewable methanol market is expected to exhibit a CAGR of 6.5% during the forecast period (2020-2027).

Who are the prominent players in the global renewable methanol market?

What are the global renewable methanol market trends?