Smart elevators or also referred to as automated elevators use artificial intelligence (AI) to provide vertical transportation of passengers and commodities. Smart elevators are typically used in hotels, hospitals, offices, sports facilities, and residences. These elevators are designed to reduce overall energy consumption and handle passenger traffic effectively within a building. Different types of technologies are incorporated in smart elevators such as biometrics, digital security control system, destination access & dispatching control system, and touch screen control. Along with these, door interlocks, battery backup, leveling device, alarm, and brake system with speed sensor, and fire emergency return are some other important control systems in smart elevators.

In May 2021, ThyssenKrupp Elevator, a Germany based leading elevator company launched new momentum elevators for high-rise buildings in Europe and Africa market. 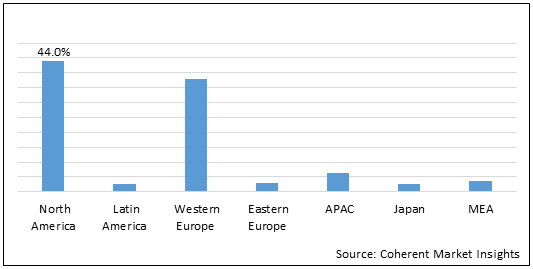 North America (Region) held dominant position in the global smart elevator automation system market in 2020, accounting for 44% share in terms of volume, followed by Europe and Rest of the world, respectively. The rapid infrastructure development and increasing smart city projects in North America is driving the region growth during the forecast period

Urbanization has increased significantly in recently across the globe. According to the United Nations (UN), around 55% of the people worldwide were living in urban areas. According to the same source, by 2050, around 66% of the global population is expected to live in urban areas. As a result of this, the construction of high-rise buildings is increasing, in order to accommodate increasing urban population in developed and emerging economies. This, in turn, is increasing the demand for smart elevator system. According to the Real Estate Institute, construction of 262 super high-rise residential buildings has been scheduled to be completed by 2015 end across cities in Japan. Thus, these factors are expected to propel the global smart elevator automation system market growth in the near future.

Key companies in the market are focused on business and capacity expansion, in order to enhance the market presence and gain a competitive edge. For instance, in May 2015 Mitsubishi Electric Corporation announced plans to set up a factory in India to expand its business operations in the country. Furthermore, in June 2014, Mitsubishi Elevators, a subsidiary of Mitsubishi Electrical Corporation, set up a Greenfield plant in India, making an investment of US$ 22.5 to US$ 30 Mn for the manufacture of elevators.

Increasing demand for the smart elevator automation system is expected to fuel installation services during the forecast period, driven by a significant rise in the construction of high-rise buildings. Repair and maintenance services are in high demand in developed countries such as the U.S., the U.K, etc., driven by growing demand and deployment of smart elevators. Modernization services segment across the globe is expected to witness the highest CAGR of 18.1% during the forecast period. This is largely attributed to increasing demand for replacement of aging components in conventional elevators with advanced components and technology.

Key players are introducing technologically advanced sensors and automation systems that can be deployed in elevators to maximize energy efficiency and elevator travel speed. Deployment of security and control systems such as fire alarm, intrusion alarm system, and surveillance systems is on the rise across the globe, propelled by growing security concerns. Demand for touchscreen and keypads is growing significantly, especially in developed regions, for refining interaction between passengers and elevators

Currently, commercial sector leads are terms of smart elevator automated systems application in high rise buildings in North America, Eastern Europe, Japan, and the Middle East, as compared to other sectors. The commercial sector is expected to exhibit comparatively slow market growth in the near future since the scope for further penetration is limited. Deployment of smart elevator automation systems is increasing in existing elevators of the residential sector, especially in Asia Pacific, Western Europe, and Latin America. This is attributed to the construction of new high-rise buildings to accommodate the rising urban populace. The hotel segment is expected to register the second-highest CAGR during the forecast period, driven by the need to reduce passenger waiting time in high-rise hotels. 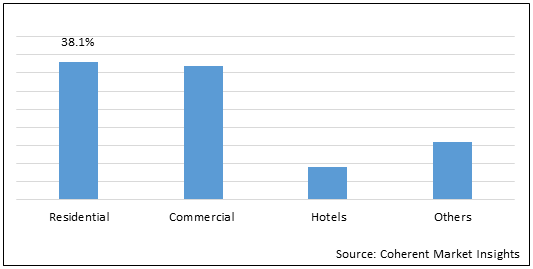 Capital cost related to procurement and installation of the smart elevator system is significantly high since elevator manufacturers invest highly to incorporate new technologies and add advanced features to new products. Such high investment is not affordable for every building owner, thereby reducing the adoption. Hence, these factors are expected to restrain growth of the global smart elevator automation system market during the forecast period.

There is a lack of awareness across commercial and residential sectors in emerging economies regarding smart elevators. Smart elevator systems can be deployed to time travel and augment passenger experience, however, a large poor of consumers are unaware of these benefits. Therefore, such low awareness is expected to hamper the global smart elevator automation system market growth in the near future.

Major companies are focused on product launches, in order to gain a competitive edge in the market. For instance, in October 2019, Schindler Group introduced R.I.S.E, a Schindler Robotic Installation System for Elevators.

Smart elevators are now being used nowadays in public buildings like hotels, residential homes, offices, malls, theaters, hospitals, sports venues and even airports. These are basically designed in order to minimize total energy consumption and better manage passenger traffic within a given building. These elevators help to increase the overall productivity of a public building and also help to keep visitors safe. For example, in a large hotel or museum, smart elevators will be able to reduce the number of elevator users and make the platform more safe and convenient for everyone.

Launch of new products is expected to propel growth of the global smart elevator automation system market. For instance, in July 2021, The Elevator and Escalator Division of Mitsubishi Electric US launched ELEMOTION, a modernization package to help building owners maintain the quality of existing elevator systems with targeted component updates.

What factors are influencing the adoption of smart elevator automation system?

High capital cost and low awareness in emerging regions are factors hindering growth of the market.

North America region held dominant position in the market in 2020.

Commercial sector leads are terms of smart elevator automated systems application in high rise buildings in North America, Eastern Europe, Japan, and the Middle East, as compared to other sectors.