Formwork are the temporary or permanent molds in which concrete and other materials are poured. The construction industry is rapidly expanding in South Africa. More number of buildings denote more developed cities. With the increasing number of buildings, construction activities are also increasing that promote the South Africa formwork market growth.

Rapidly expanding construction industry in South Africa is propelling the formwork market growth. As per the South African Forum of Civil Engineering Contractors (SAFCEC), in 2017, South Africa accounted for the largest share in terms of construction projects in the Southern African region (including Angola, Botswana, Lesotho, Malawi, Mozambique, Namibia, South Africa, Swaziland, Zambia, and Zimbabwe) with 47.3% of the total projects. The construction sector contributed around 3.9% to the national GDP in 2016; however, the industry has been static since the 2010 Soccer World Cup project.

According to the African Financing Partnership, in 2016, the international development finance institutes (DFIs) and African DFIs funded 10.6% and 4.7% of projects throughout South Africa respectively, with China funding 8.2% of the projects. Under the government’s National Development Plan (NDP) project, South Africa government is focusing on investing US$ 64.4 billion in public infrastructure over the next few years. This is expected to positively affect the growth of the construction sector, which in turn, could boost the demand for formworks.

Weakening value of rand is mainly restraining the market growth. The commodity markets were largely impacted, and the subsequent decrease in revenue affected major construction firms including Murray & Roberts and Group Five. A depreciating currency results in decreasing profits for construction companies across the country, thus affecting the demand for construction projects.

As per the Work Bank data the global economic slowdown has caused South Africa’s economy to grow at a slower rate, resulting in sluggish growth of the construction sector. South Africa’s rand value had dropped significantly with respect to dollar losing 26% of its value in the six months after turmoil gripped the Chinese markets in 2015. With a decreasing value of rand, project costs had risen due to the rising prices of construction materials including steel and oil.

The South African government is investing in public infrastructure including projects such as housing, roads, the construction of schools, and others. As a result, the demand for formwork from public sector is increasing, which is expected to aid in the market growth. The government also established the National Development Plan (NDP) in 2012 for future construction projects. There are positive future developments expected such as the Commonwealth Games in 2022, offering the construction industry as well as South Africa formwork market a lucrative opportunity for optimal growth.

Apart from this, the Presidential Infrastructure Co-ordinating Commission (PICC) is also planning to build six new dams within South Africa by 2028 in order to address the country’s long-term water and sanitation needs.

By material types, South Africa formwork market can be segmented into Timber & Plywood, Aluminum, Steel, and Others. Steel held 39% of market share in 2020 and is expected to keep its dominance during the forecast period. As per the South Africa Builders Association, construction is one of the most important steel-using industries, accounting for more than 50% of world’s steel demand. Buildings, houses, car-parking, schools, and skyscrapers rely on steel for their strength. Steel is also used on roofs and as cladding for exterior wall. 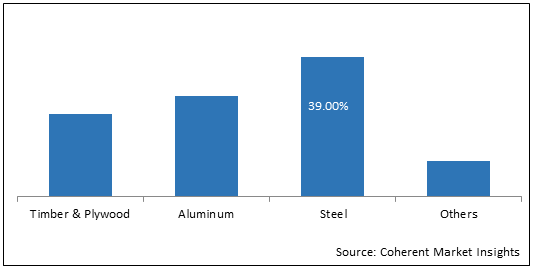 South Africa formwork market is impacted due to the ongoing COVID-19 pandemic. Several states and local bodies in South Africa have imposed lockdowns to limit the spread of the virus, which resulted in the shutting down of businesses and ceasing of several economic activities. Moreover, supply chain disruption has indirectly led to low demand for formwork in South Africa.

Formwork is the temporary or permanent molds into which concrete materials are poured. In the context of concrete construction, the false work supports the shuttering moulds. Most of the buildings which are made to stand for a long time are made of concrete and mortar. These building materials are strongest and most suitable but at the same time they are a bit tedious to deal with. Formwork serves as mold for concrete structural components unless such mold is provided by soil and other structural components. It molds the placed fresh concrete, which in this stage is normally viscous, to the shape. Formwork has a fundamental role in concrete construction. It must have enough strength to bear all the loads present during casting operations and hold its shape while concrete hardens.

The flourishing construction industry in South Africa is expected to propel the formwork market.

Power supply shortage is a major concern for construction companies in South Africa. The reduction in public sector spending coupled with delays such as the delays at Eskom’s Medupi and Kusile power stations has led to an uncertainty in the energy sector, which in turn, could affect the construction sector. During March 2015, construction on Eskom’s 4800MW Medupi coal-fired power station was ceased due to strike by laborers, resulting in a major delay. In the long run, increasing power shortages may force the construction industry to start investing in automation which could affect the formwork market in the near future.

What will the South Africa formwork market size be in 2028?

Rapid urbanisation is expected to boost the market growth.

Weakening value of rand high cost are expected to be restraining factors for the market.

What is the current the market size in 2020?