Press Release: Spinal Muscular Atrophy Market to Reach Beyond US$ 2.5 Billion by 2026

Spinal Muscular Atrophy Market to Reach Beyond US$ 2.5 Billion by 2026

Spinal muscular atrophy (SMA) is a genetic disorder that affects the control of muscle movement. It is caused due to loss of specialized nerve cells, called motor neurons, in the spinal cord and brainstem. The loss of motor neurons leads to weakness and atrophy of muscles used for activities such as sitting up, walking, crawling, and controlling head movement. In severe cases, the muscles used for swallowing and breathing are also affected. There are four types of spinal muscular atrophy, which are differentiated based on the severity of muscle weakness, pattern of features, and age, when the muscle problems begin. These are classified as type 1, 2, and 3 that appears in childhood. Type 4 appears in adulthood and is also termed as adult onset SMA. 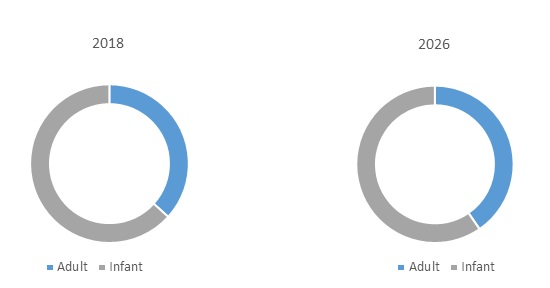 Various government and private organizations are investing huge capital and resources towards the development of new and effective therapies for spinal muscular atrophy. For instance, in 2015, the SMA Foundation financed over US$ 60 Mn in drug development programs and essential drug discovery assets that aim to develop an effective SMA therapy. In 2013, Cure SMA granted fund to Cytokinetics for the study of Tirasemtiv for SMA. Financial details of the grant were not disclosed. Tirasemtiv is a novel skeletal muscle activator and a lead drug candidate from Cytokinetics' skeletal muscle contractility program. It has been studied in clinical trials for individuals with amyotrophic lateral sclerosis (ALS). Similar to SMA, ALS also affects motor neurons.

The National Institute of Neurological Disorders and Stroke (NINDS), a part of the National Institutes of Health (NIH), conducts clinical, translational, and basic research on SMA and also supports research through grants to major medical institutions across the U.S. In 2011, the authority established NeuroNext clinical trials network to promote rapid development and implementation of trials for neurological disorders that affect adults and/or children. The network is designed to develop early-phase trials aimed at identifying biomarkers that can be measured to determine the presence and severity of a disease—and testing promising, emerging therapies. 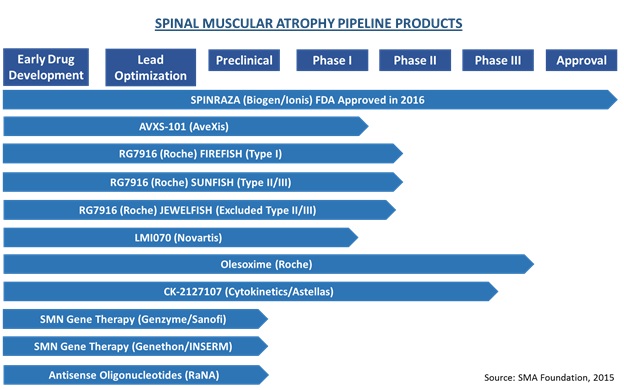 Spinal muscular atrophy mainly manifests early in life and therefore is a major genetic cause of death in infants. It is one of the most common rare diseases. According to SMA Foundation 2015 statistics, spinal muscular atrophy has generally been believed to affect as many as 10,000 to 25,000 adults and children in the U.S. In March 2018, CureSMA stated that SMA affects around 1 in 11,000 children, and 1 in 50 is a carrier of the disease. It has been found in people of every race, however, is most common in Caucasians, of whom 1 in 35 is a carrier. Spinal muscular atrophy carrier rates for other populations include Asians (1 in 53), African Americans (1 in 66), and Hispanics (1 in 117).

Spinal muscular atrophy (SMA) is a rare, genetically inherited neuromuscular condition. The disease causes loss of movement and progressive muscle weakness due to muscle wasting (atrophy). The disease is divided into four subtypes (1 to 4) on the basis of the age of onset. SMA type 1 (SMA1) is the most severe form and most common genetic cause of death among infants. Various drugs are available in the market to treat the symptoms of the diseases, however, only one drug is approved for the treatment of SMA so far. Muscle relaxants such as tizanidine, baclofen, and the benzodiazepines can reduce spasticity. Excessive saliva can be treated with glycopyolate, amitriptyline, and atropine or by botulinum injections into the salivary glands. Antidepressants can be helpful in treating depression. Botulinum toxin can also be used to treat drooling or jaw spasms.

Major factors driving growth of the spinal muscular atrophy market includes increasing number of clinical trials and rising government support for R&D. Biotechnology and biopharmaceutical companies are working towards development of effective therapies to treat spinal muscular atrophy. For instance, in 2016, the U.S. FDA approved Spinraza (nusinersen) drug from Biogen for the treatment of SMA. Spinraza targets the underlying defect in SMA, so it can help prevent, delay, or even reverse the symptoms.

However, its common side effects include higher risk of constipation and respiratory tract infection along with minimal risk of kidney problems and bleeding. Moreover, the cost of research for development of new therapy is also high. With the advancements of drug in the pipeline, its expense and time for development also increases. According to Cure SMA, it can take over 15 years and US$ 100 million for a single drug candidate to reach FDA approval. These factors make research challenging particularly for a disease such as SMA. These factors are expected to hinder growth of the market.