Viral Vector and Plasmid DNA Manufacturing Market to Surpass US$ 2,205.6 Million by 2027

Viral vectors are used as carriers to transfer the genetic material into other living organisms. The viral vector production can be done in two types of culture system such as suspension cell cultures and adherent-cell systems. For large-scale manufacturing of viral vectors, the conventional lab processes of adherent-cell systems such as multilayer flasks, hollow-fiber technologies, T-flasks, and roller bottles experience challenges in scaling up such as larger space requirement and increased manual workload.

Plasmid DNA is extrachromosomal DNA found in bacteria, which is generally circular in shape. The genetic engineers use plasmid DNA to create recombinant DNA, in order to transfer genetic material in other organisms. Plasmid DNAs are limited by some biological barriers such as endosomal attack, renal clearance, and degradation by serum endonucleases. Moreover, for direct gene transfer into humans, good manufacturing practice (GMP)-grade plasmid DNA is mandatory. Therefore, around 70% of gene therapy clinical trials, to date, have involved viral vector systems.

Moreover, several clinical trials are being conducted on viral vectors and plasmid DNA manufacturing that are focused on the potential of gene therapy. According to a data published by the Journal of Gene Medicine, in 2017, around 2,600 gene therapy clinical trials are ongoing, have been completed or approved in 36 countries. Moreover, countries, where the trials were conducted include the U.S., U.K., Australia, Canada, China, France, Germany, Japan Switzerland, the Netherlands, and others. 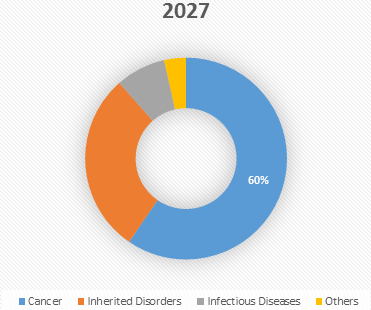 The rising demand for viral vector and plasmid DNA for gene therapies has led major players in the market to launch new and technologically advanced programs and devices to scale up the production of viral vectors and plasmid DNA. For instance, in April 2018, GE Healthcare Life Sciences launched a prefabricated, modular bioprocessing facility KUBio BSL 2 for production of viral vector-based vaccines, oncolytic virus, and cell and gene therapies.

Moreover, government funding is increasing for development of new technologies and production facilities of viral vector. For instance, in 2018, Innovate UK, Department for Business, Energy & Industrial awarded the Industrial Strategy Challenge Fund of US$ 3.4 million capital to Cobra Biologics for infrastructure investment to expand manufacturing capabilities and commercialization of DNA and viral vectors products. Thus, rising research and development funding from government organization is expected to drive growth of the market over the forecast period.

Viral vectors aids in transferring genetic material into target cells and therefore, used in various therapeutic areas. Viral vectors can be significantly used in vaccines development against pathogens such as Mycobacterium tuberculosis, Plasmodium falciparum, HIV, and various bio-threat targets such as filoviruses. Plasmid DNA (pDNA) is gaining traction for clinical research applications in genetic vaccination and gene therapy. It is becoming increasingly useful as novel biotechnology product for DNA vaccines and gene medicines. It can be directly used as a therapeutic agent and indirectly used for various applications such as a starting material for transient transfection to produce transient proteins and viral vector constructs. Furthermore, pDNA is used as a master-template product to support production of new and developing biopharmaceutical products and processes such as cell therapies.

Increasing approvals by regulatory authorities for novel gene therapies is expected to drive growth of the gene therapy segment. For instance, in September 2017, GeneOne Life Science, Inc., received approval from the South Korean Ministry of Food and Drug Safety (KMFDS) for an Investigational New Drug application for a Phase I/IIa study of its investigational vaccine, GLS-5300, against the Middle East Respiratory Syndrome coronavirus (MERSCoV). Moreover, in May 2019, AveXis Inc. received the U.S. Food and Drug Administration approval for its Zolgensma (onasemnogene abeparvovec-xioi), an adeno-associated virus vector-based gene therapy for the treatment of pinal muscular atrophy (SMA) in children less than two years old.

What are the growth estimates for viral vector and plasmid DNA manufacturing market till 2027?

The global viral vector and plasmid DNA manufacturing market is estimated to surpass US$ 2,205.6 Million by 2027.

Which are the prominent viral vector and plasmid DNA manufacturing market players across the globe?

What are the key factors hampering growth of the viral vector and plasmid DNA manufacturing market?

Manufacturing processes of viral vectors is expensive and time consumingand it is one of the major factors that is expected to hamper growth of the market over the forecast period.

What are the key factors driving growth of the viral vector and plasmid DNA manufacturing market?

Increasing number of patients opting for gene therapy for treating diseases such as cancer, cystic fibrosis, heart disease, diabetes, hemophilia, and AIDS is one of the major factors that is expected to propel growth of the market over the forecast period.

What is the compound annual growth rate (CAGR) of the viral vector and plasmid DNA manufacturing market for next 8 years?

The global viral vector and plasmid DNA manufacturing market is estimated to exhibit a CAGR of 22.8% over the forecast period (2019-2027).

Which segment based on product type, accounted for the highest demand in the viral vector and plasmid DNA manufacturing market?

Rabies is a viral zoonotic disease caused through a dog’s bite which leads to progressive and fatal inflammation...