Global Spirulina Market to Surpass US$ 1958.4 Million by 2025, Fuelled by Rapid Demand for Natural Food Colors

Spirulina is a nutritional supplement, majorly obtained from the two species of cyanobacteria, including arthrospira maxima and arthrospira platensis. Spirulina is defined as a type of algae that grows naturally in the alkaline waters of lakes, ponds, and rivers in warm regions. Spirulina is associated with high nutritional value, including vitamins A, C, E, and B12, and minerals, protein, carbohydrates, and essential lipids. Arthrospira is used in dietary supplements, as whole food, and is available in varied forms such as capsules, tablets, flakes, powder, and liquids. Furthermore, spirulina is extensively used as a feed supplement in aquaculture, aquariums, and poultry industries.

Growing awareness regarding the health benefits of spirulina super food among consumers and wide variety of natural colors produced by spirulina are the major factors propelling growth of the spirulina market. Furthermore, the government of countries such as India, Ghana, and Angola are promoting the production of spirulina, considering its health benefits, thus strengthening this market. Spirulina comprises high anti-oxidant, hypolipidemic, beta-carotene, and anti-inflammatory properties. Owing to exceptional properties, spirulina offers health benefits including reduced cholesterol and blood pressure. Growing penetration of spirulina in the cosmetics and pharmaceutical industries is further expected to propel tremendous growth to this market during the forecast period (2017 – 2025).

However, lower stability of natural colors derived from spirulina as compared to synthetic colors is considered as a threat against market growth. These natural colors have poor sustainability against the effect of light, thereby changing its color easily.

In terms of revenue, Europe held a dominant position in the market in 2016, accounting for 32.00% share in the global market for spirulina. Growth of the market in the region is attributed to the increasing demand for naturally derived food coloring agents in the region. Furthermore, in 2014, the European Food Safety Authority (EFSA) has lowered the acceptable daily intake for synthetic food color, including sunset yellow FCF (E110), ponceau 4R (E124), and quinolone yellow (E104). This in turn, increased the demand for natural food colors in the region, thus supporting growth of the spirulina market. As spirulina has a high content of a natural pigments that imparts blue color and is combined with other colors, in order to obtain new customized colors such as lavender, violet, and green. However, the blue spirulina color is used extensively in the food and beverages industry and is the most popular natural food color in the region.

Asia Pacific is expected to be the fastest growing market for spirulina, witnessing highest CAGR of 14.48%, owing to robust growth of the food processing industry in the region. Furthermore, growing demand for spirulina powder among vegetarian consumers is another factor fueling growth of this market, as spirulina is a 100% vegetarian dietary supplement. According to the Food and Agriculture Organization of the United Nations, India recorded the lowest rate of meat consumption in the world in 2007, which is due to the large number of vegetarian demographics, residing in India. Rapidly growing aquaculture in the region is expected to fuel the spirulina market during the forecast period, owing to the extensive consumption of spirulina in aquatic farming and hatchery. According to the Food and Agriculture Organization of the United Nations (FAO), the aquaculture in Asia Pacific has recorded an appreciable growth in the past three decades and in 2014. Owing to this, Asia Pacific was projected as the key supplier to the global seafood trade, with Asian aquaculture being the major contributor in the traded seafood commodities. This fully fledged aquaculture in the region is in turn boosting growth of the spirulina market.

On the basis of form, the global spirulina market is segmented into powder, tablets/capsules, liquids, and granules. The powder segment held a dominant position, in terms of volume, in 2016 due to its ease of application as compared to the liquid form. The segment is expected to maintain its dominance during the forecast period, witnessing highest CAGR among others. Furthermore, the tablets and capsules segment is expected to be the second largest segment during the forecast period. 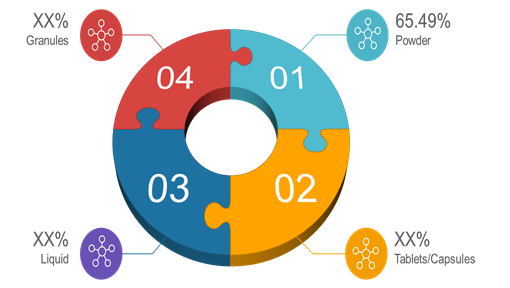 On the basis of composition, the market is segmented into protein, carbohydrates, minerals, lipids, and others, with protein being the major contributor in the global growth of spirulina market, as of 2016. This is majorly due to its high protein content and presence of all essential amino acids with less amounts of cysteine, lysine, and methionine as compared to standard proteins, including milk, eggs or meat. However, the spirulina protein is superior to all standard plant protein, including legumes.

Spirulina is a blue-green microalgae comprising high protein content, with a wide range of application across the food and beverages, nutraceuticals, cosmetics & personal care, and animal feed industry. The food and beverages industry is the major contributor for growth in the global spirulina market. Spirulina has various health benefits and has an ability to overcome malnutrition due to its high content of protein, vitamins, minerals, antioxidants, and carotenoids.

Growing awareness regarding the health benefits of consuming natural food colors over synthetic food colors among consumers and stringent government regulations such as European Food Safety Authority (EFSA), against the trading of synthetic food colors infused products are major factors propelling growth of the spirulina market.

Europe held a dominant position in the spirulina market in 2016, owing to the growing demand for natural food colors among consumers. Spirulina is considered as the most popular natural food color among the food and beverages manufacturers in the region. Furthermore, the extensive usage of spirulina in the cosmetic & personal care industry is fueling market growth, owing to the anti- aging property of spirulina.

Asia Pacific is expected to project the fastest growth in the global spirulina market during the forecast period. Rapid penetration of the spirulina in the food & beverages and pharmaceuticals industries is largely contributing to the overall growth of the market in the region. Furthermore, high demand for processed food in emerging economies including India, China, and Vietnam coupled with the developments in aquaculture are expected to boost growth of the spirulina market in the region during the forecast period.

What are the growth estimates for spirulina market till 2025?

Which are the prominent spirulina market players across the globe?

What are the key factors hampering growth of the spirulina market?

What are the key factors driving growth of the spirulina market?

What is the Compound Annual Growth Rate (CAGR) of the spirulina market for next 8 years?

The global spirulina market is estimated to exhibit a CAGR of 12.39% over the forecast period

Which region is dominating the spirulina market growth?

Among regions, Europe held dominant position in the market in 2016, accounting for 32.0% share in the global market.