Among applications, the electric vehicles segment held a dominant position in 2017 and is expected to retain its dominance throughout the forecast period. In 2017, the electric vehicle segment generated revenue of US$ 4.2 billion, exhibiting a CAGR of 20.6% over the forecast period to reach US$ 18.8 billion by 2025. Increasing adoption of electric vehicles is one of the major factors driving growth of the segment. For instance, according to International Energy Agency, the global sales of new electric cars surpassed 1 million units in 2017, which was 56 percent sales growth of new electric car as compared to that in 2016. China held the largest market share of sales of electric cars in 2017. 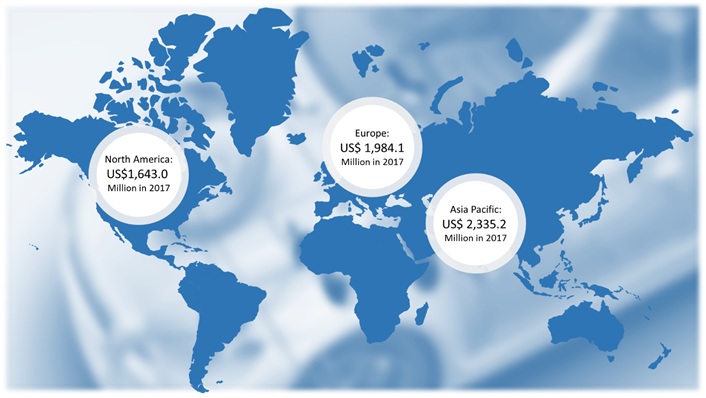 Asia Pacific held the dominant position in the global start-stop battery market and is projected to retain its dominance throughout the forecast period. India, China, Japan are major growth engines for the start-stop battery market in this region. In 2017, the Asia Pacific start-stop battery market generated revenue of US$ 2.3 billion. The market is expected to reach US$ 11.9 billion by 2025, exhibiting a CAGR of 22.7% over the forecast period. The increasing sales of automotive vehicles in Asia Pacific countries become one of the major driving factor for the growth of the market in this region. According to International Organization of Motor Vehicle Manufacturers, in 2017, the sales of automotive vehicle was 29.1 million units up from 28.0 million units in 2016. Similarly, the sales of new vehicles in India and Japan was 4.0 million units and 5.2 million units in 2017. Hence, this increasing sales of automotive vehicles have increased the installation of start stop technology which parallel fuels the market of start-stop battery in this region.

The Europe start-stop battery market generated revenue of US$ 1.98 billion in 2017 and is expected to reach US 9.5 billion by 2025, exhibiting a CAGR of 21.5% over the forecast period. Germany, France, and U.K. are major growth engines for the market in this region. The increasing sales of automotive vehicles Europe is one of the major factors driving growth of the market in this region. According to International Organization of Motor Vehicle Manufacturers, the sales or new registration of automotive vehicles in Europe was 20.9 million units in 2017, which was an increase from 20.1 million units recorded in 2016. Increasing adoption of automotive vehicles in turn, is increasing the demand for start-stop batteries to lower energy consumption and emissions by vehicles. Thus boosting growth of the start-stop battery market in European countries. Increasing regulations to reduce carbon emissions also plays a key role for growth of the market in this region. According to European Union legislation, the average emissions level of a new car sold in 2017 was 118.5 grams of CO2 per kilometer, with a target to reach 95 grams of CO2 per kilometer by 2021.