SURF (Subsea Umbilicals, Risers and Flowlines) Market to Surpass US$ 77.80 Billion by 2026

SURF (subsea umbilicals, risers and flowlines) offers connection between subsea production and surface systems. Umbilicals provide a vital link between subsea production system, processing system, and the surface and have no contact with the produced fluids. Flowline transports the unprocessed fluid from the subsea well to the riser, which is then transported from the riser to the surface processing system.

Increasing demand for oil and gas backed by increasing exploration and production activity in deep and ultra-deep water depths have boosted growth for the global SURF (subsea umbilicals, risers and flowlines) market. For instance, according to the U.S. Geological Survey’s estimates from 2013, Brazil holds largest oil potential of the three nations (Brazil, Guyana and Mexico), with 126.4 Bbbl of oil estimated to be undiscovered, much of that potential is held in ultra-deepwater presalt formations.

However, the decline in crude oil prices over the past few years stands as a restraint in the growth of the global SURF (subsea umbilicals, risers and flowlines) market. Furthermore, problems for the oil prices also occur owing to the declining export from Iran. The export from the country declined from 2.6 million barrels per day (bpd) in April 2018 to 1.6 million in September 2018 to 1.1 million bpd in October 2018.

Among the water depths, deepwater is expected to be the most conducive segment in the market for growth during the forecast period, owing to rising deepwater exploration & production activity, across the globe. 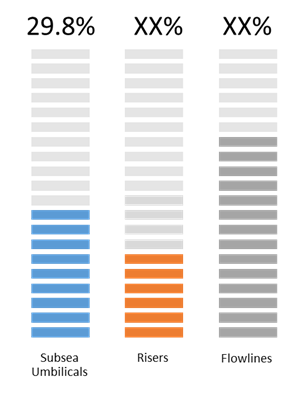 Flowlines dominated the global SURF (subsea umbilicals, risers and flowlines) market in 2017, among the product type category with a market share of 49.8%. According to Oilfield Technology, Russia is expected to account for the highest new build capital expenditure (CAPEX) of around US$78.8 billion for 2018-2022 period. Also, according to Open Access Government, Russia-India is the longest planned natural gas pipeline in the country as well as for the European region. It is expected to start its operations in 2022 with a planned length of 6000 km. Moreover, according to Norwegian Petroleum Directorate, in 2018, 53 exploration wells were drilled in Norway, which was up from 36 in 2017. In addition to this, the government also awarded 87 new production licenses in the country.

Europe accounted the largest revenue share in the global SURF market in 2017. This is owing to growing oil and gas exploration, production activity, and rising initiatives of major players to build advanced technologies. For instance, in 2017, Ocean Installer was awarded a SURF project at the Al Jurf oil field in the Mediterranean by Mabruk Oil Operations, a joint venture between the National Oil Cooperation (NOC) of Libya and Total E&P.

Asia Pacific accounted a revenue share of 25.7% in 2017, and is expected to be one of the conducive regions for growth of the global SURF market during the forecast period. This is owing to increasing investments by major players coupled with augmenting oil and gas exploration and production activities in this region. For instance, in 2018, India’s Oil and Natural Gas Corp. (ONGC) awarded its largest single subsea contract to a consortium of McDermott International, Inc., Baker Hughes, a GE company (BHGE) and L&T Hydrocarbon Engineering (LTHE), subsidiary of Larsen & Toubro. These companies would provide ONGC with subsea equipment and services for its largest deepwater project. In addition to this, ONGC contract calls for installing subsea umbilicals, risers and flowlines (SURF) at water depths ranging from 984 feet (300 meters) to 10,500 feet (3,200 meters).

Interruptions to production are costly, in the subsea environment. Increasingly higher-pressure and deeper-water targets generate demanding monitoring requirements. Deepwater installations are endangered to various physical and chemical conditions such as hydrate formation and asphaltene deposition that compromise project economics production. SURF (Subsea Umbilicals, Risers and Flowlines) form this vital link among the various centers of operation.

Increasing demand for offshore field vessels is one of the major factors propelling growth of the global SURF (Subsea Umbilicals, Risers and Flowlines) market. Furthermore, rising demand for oil and gas coupled with increasing exploration and production activities in deep and ultra-deep water depths are other drivers promoting growth of this market. Moreover, technological innovations in terms of products such as subsea umbilicals, risers and flowlines is also aiding in growth of the market. These products could withstand high mechanical and chemical stress and have the capacity to work under extreme temperature and pressure.