Us Plastic To Fuel Market Analysis

Plastic-to-fuel is an advanced technology used to convert plastic waste into liquid fuels in order to deliver environmental benefits. This process involves the development of ultra-clean and ultra-low sulfur fuel from unsorted waste plastic. In this process plastic are shredded and heated under the temperature of 400 deg Celsius in an oxygen-free chamber, the process known as pyrolysis. Automotive, food & beverage, petrochemical, agricultural, and cosmetics are major end-user of plastic-to-Fuel.

Increasing plastic waste on the land due to exceeding the production of plastic in the Country. According to the United States Environmental Protection Agency, the containers and packaging category had the most plastic tonnage at over 14 million tons in 2017. Thus, increasing volume of plastic waste on the landfill is encouraging players to adopt recycling plastic in order to deliver environmental benefits. This is expected to propel the market growth.

Rising demand for energy in the country due to the presence of well-established infrastructure is expected to foster market growth. According to the U.S. Energy Information Administration, fossil fuels petroleum, natural gas, and coal accounted for around 79% of total U.S. primary energy production in 2018. Rising demand for energy in the U.S country is expected to augment the market growth over the forecast period.

The high initial cost of the setup is expected to hinder the market growth of the U.S. Plastic-to-Fuel. As per estimates by the American Chemistry Council, a single plastic-to-oil facility will incur a capital expenditure of between US$ 10 Million to US$ 18 Million. Moreover, pre-processing of waste plastic is another major factor that adds to the overall cost.

Growing demand for petroleum products is expected to offer lucrative growth opportunity to the market of the U.S. plastic-to-fuel. According to the U.S. Energy Information Administration, gasoline is the most consumed petroleum product in the United States. In 2018, consumption of finished motor gasoline averaged about 9.33 million b/d (392 million gallons per day), which was equal to about 45% of total U.S. petroleum consumption.

The growing focus of manufacturers in increasing the capacity and processing capabilities of the processors used to convert waste plastic to oil is expected to accelerate the market growth. Various research is conducted in order to deal with the technological barrier and minimize the pre-processing cost incurred on the sorting of plastic. This ongoing trend in the market is expected to stimulate market growth.

The rising trend of supplying technology to the third party to expand their presence in the market is expected to foster market growth. For instance, in January 2015, Green Envirotec Holdings has entered into an agreement with Texas-based Corporation, Cenco Leasing Co., whereby the company granted an exclusive license to the latter in order to develop its proprietary technology to convert discarded tyres and plastics into oil. 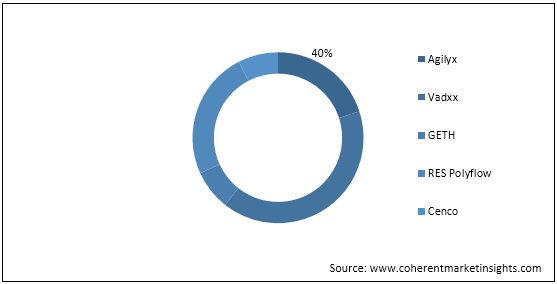 On the basis of fuels, Vadxx dominated the U.S. Plastic-to-Fuel market in 2019 with around 40% of market share in terms of revenue, followed by Agilyx and RES Polyflow, respectively.

Fuel derived from plastic provide a cleaner burning fuel as compared to the conventional fossil fuel used predominantly, owing to the lower content of sulfur. Majority of the population in emerging economies use diesel with higher sulfur content. In addition to this, various factors such as rising infrastructure, increasing technology, and expansion of plant capacity is expected to provide lucrative growth during the forecast period.

The global mining floatation chemical market has witness a surge in market growth in terms of revenue in recent past years, owing to the rising growth in demand of energy among various industries such as chemical, consumer goods, manufacturing, cosmetics and others in the country. The surge in use plastic consumption across the U.S. is fuelling the growth of plastic-to-fuel market in the U.S.

On the basis of fuel, U.S. plastic-to-fuel market can be segmented into Agilyx, Vadxx, GETH, RES Polyflow, and Cenco. U.S. is expected to witness substantial growth during the forecast period owing to the rising demand for plastics for feedstock in the U.S. Furthermore, stringent government policies in U.S. towards energy security in anticipated to drive the growth of the plastic-to-fuel market.

What are the Major growth driving factors for the U.S. Plastic-to-Fuel Market during the forecast period?

Increasing plastic waste on the land owing to rise in production of plastic and rowing demand for petroleum products is fuelling the growth of the Plastic-to-Fuel Market in the region.

What are the trends in the U.S. Plastic-to-Fuel market?

Rising trend of supplying technology and growing focus of manufacturers in increasing the plant capacity are expected to favour market growth over the forecast period.

What are the key factors hampering the growth of the U.S. Plastic-to-Fuel market?

Higher initial cost of the setup is expected to hamper the growth the market during the forecast period.

The Plastic-to-Fuel market was estimated to be valued around US$ 95.0 billion in terms of revenue in 2019.