Growing population of women alcohol consumers, expansion of bars and restaurants, exploring different forms of entertainment such as night parties, growing demand from emerging economies and preference for low calorie alcoholic beverages stands to be some of the key driving factors of the wine market. For instance, in India, the number of pubs and bars grew by over 23% during 2014-2016, compared to cafes during the same time period. The health benefits associated with wine such as lower risk of heart disease, reduce risk of type 2 diabetes and cataracts is also playing a key role in driving the market for wine. Additionally, with the increasing number of millennials shifting from beer and spirit based drinks to wine, the market for wine is expected to witness a positive growth trend during the forecast period. Additionally, the ongoing increase in the consumption of alcohol among females is further driving the sales of red and white wine, thereby helping the market for wine. According to a study conducted by Coherent Market Insights, it is estimated that over 55% of the women prefer wine compared to around 39% for beer in the US. However, the high price of wine compared to other alcohol based drinks such as beer is one of the major hindrance to the growth of the market.

Still wine segment held the majority of market share with around 83% among product types in 2016, while red wine was the preferred option among all customer groups. Changing taste and new preferences among consumers and rising demand for new and exotic flavors such as Riesling wine and other tropical fruit wine is fuelling the growth of the wine market. The market for sparkling wine segment is expected to grow at a CAGR of 4.94% during the forecast period owing to increasing consumption of champagne during social celebrations.

In 2016, Europe was the leading region with a market share of 63% in the market. France, Spain, Italy and Germany were the major growth engines in wine market during this period. Moreover, Italy, Spain, and France contributed over half of world’s wine production owing to its vast vineyard area. However, Asia Pacific is expected to witness the fastest growth in wine market till 2022.

North America stands as the second largest market for wine with US being the largest player in the region. At a global level, US contributed about 12% of the global market and also being the largest market globally. The country has over 9000 wineries with California contributing around 90% of the wine production in the country. Despite the ageing baby boomers being majority of the consumers of premium wines in the country, growing interest amongst the millennials are bringing a shift in the target customer group which will play a significant role in boosting the growth of the wine market in the country. It is found that millennials consumed over 43% of all wine consumed in 2015 than any other generation as they continue to shift from beer to wine.

Asia Pacific is projected to witness the fastest growth in the wine market with countries such as China, India being the key contributors in the region. At a global level, China stands to be the largest market for alcohol consumption with the country also being one of the leading importers of wine worldwide. The ongoing recovery of the Chinese economy, growing upper middle class population and the rising disposable income is further expected to boost the consumption of wine in the country. The country is also focused towards manufacturing its domestic wine, further promoting the growth of wine in the country. Zhejiang Guyue Longshan Shaoxing Wine Company remained the market leader and witnessed volume sales increase by over 5% in 2016. Additionally, with the Chinese government promoting Hong Kong as a wine trading hub and the rise in events such as Hong Kong International Wine and Spirits Fair, ProWine China will further promote the growth and awareness of wine in the country.

Middle Eastern countries such as Saudi Arabia, UAE, Qatar offers high income population which acts an important driving factor of the wine market in the region. The growing influx of tourists and the booming hospitality industry is also further helping the market to grow in these countries. As a result, the imports of wine from several European countries and American countries continue to grow in the country. However, stringent government and religious factors are the major challenges which will affect the growth in this region. For instance in UAE and Qatar, expats need to obtain permits to buy alcohol from designated liquor stores for private consumption.

Latin America stands to be another important region which is showcasing a strong preference for wine. Mexico which stands to be an important market in the region has witnessed a significant increase in the volume sales increasing by over 8.5% in 2016. Additionally, with different varieties of wine being easily available across different retail outlets will further boost the market in the coming years. 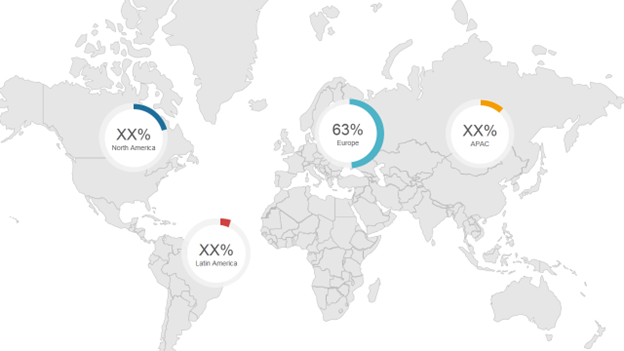 Europe dominated the global wine market in 2016 and is expected to retain market dominance throughout the forecast period, with major contribution coming from the emerging economies of India and China.

Wine is an alcohol based drink that is usually made from grapes and is mainly directly consumed, while also extending its use for cooking purpose and religious rites. The changing consumer lifestyle and the growing awareness of the health benefits of wine has further led many consumers shift from beer and spirit based drinks to wine. The calorie content in beer is about 1.3 times more than that of wine resulting in many calorie and health conscious consumers shifting from beer to wine.

Although the major consumer base stands to be the middle and older age group, there is a growing demand amongst the millennial which is further helping the market to grow. In the US, over 80% of the millennial population and 75% of the Gen X population prefer dining outside compared to around 70% for the baby boomers. It is also noticed that the percentage of wine drinkers for millennials has increased by over 10.5% compared to just 5.5% for baby boomers showcasing a gradual shift in target customer group.

In terms of revenue, the wine market is expected to expand at a CAGR of over 3.23% during the forecast period (2017-2025). According to a study conducted by Coherent Market Insights, the still wine segment is estimated to reach $255.66 billion by the end of 2017. The demand for fortified wine is expected to increase while sparkling wine stands to be the fastest growing segment over the forecast period. For instance, demand for new flavors such as marijuana infused wine and people opting for strong alcohol content are helping the market for fortified wine to grow. However, rising import duties in countries such as Australia and Russia and economic instability will act as a major hindrance in the market during the forecast period. For instance, the price of wine increased by 3% in UK, an increase by around 1% over the past two years post Brexit.

The wine market is segmented on the basis of product type and color. Both red and white wine will continue to witness surge in sales owing to the changing lifestyle patterns, ordering wine at social gatherings, the health benefits associated with it and different activities carried out by the government to promote the wine industry. Although Europe contributed over 63% of the global wine consumption in 2016, APAC stands to be the fastest growing market and is forecasted to grow at a CAGR of around 7% followed by Latin America with CAGR of 5%.

What are the growth estimates for wine market till 2025?

Which are the prominent wine market players across the globe?

What are the key factors hampering growth of the wine market?

High price of wine compared to other alcohol based drinks such as beer is one of the major factors that is expected to hamper growth of the market over the forecast period.

What are the key factors driving growth of the wine market?

Growing population of women alcohol consumers and expansion of bars and restaurants are some of the major factors that are expected to propel growth of the market over the forecast period.

What is the Compound Annual Growth Rate (CAGR) of the wine market for next 8 years?

The global wine market is estimated to exhibit a CAGR of 3.23% over the forecast period.

Which region is dominating the wine market growth?

Among regions, Europe held dominant position in the market, in 2016.