Conditioning Access Systems Market Is Expected To Exhibit a CAGR of 10.3% During The Forecast Period (2020-2027) - Coherent Market Insights

The Global Conditioning Access Systems Market, By Solution Type (Smartcard-based and Cardless), By Application (Television, Internet and Digital Radio) and by Region (North America, Latin America, Europe, Asia Pacific, Middle East and Africa) - Global Forecast to 2027”, is expected to be valued at US$ 7,976.5 Million by 2027, exhibiting a CAGR of 10.3% during the forecast period (2020-2027), as highlighted in a report published by Coherent Market Insights.

Conditional access or also referred to as a conditional access system is the protection of content by requiring certain criteria to be complied with before allowing access to the content. Generally, this term is used for digital television systems and software. CAS is also used for content protection in internet protocol TV, digital radio broadcast, and other internet-based services. The global conditional access systems market focuses on five regions namely North America, Latin America, Europe, Asia Pacific, and Middle East & Africa.

Rising adoption of various internet services such as OTT and IPTV content has led to increased demand for conditional access systems across the world. Internet protocol TV (IPTV) and other internet streaming services are popular in developed regions such as Western Europe and North America. Thus, these regions have become favorable locations for deployment of conditional access solutions. Furthermore, digital radio broadcast has witnessed significant adoption in the recent past, which in turn, is expected to drive growth of the global conditional access systems market during the forecast period. For instance, in June 2015, Digital Radio Austria launched pilot programs for testing purposes. Under this program, Digital Radio Austria launched over 15 radio channels scheduled for 10 months.

The COVID-19 Pandemic have adversely affected economies of  many countries around the globe. According to the International Monetary fund data published in 2020, the global economy is expected to shrink down by 3% percent in the year 2020 compared to year 2019. Due to the reduction in the size of global economy the spending or purchasing power of people also decreases. According to CMI study, people are less likely to spend on the consumer electronics items such as television sets in the year 2020-2021. Conditional Access systems are majorly used in the television industry. In addition to this, owing to the lockdown imposed by several countries, consumer electronics stores are closed, which are are also hampering the sale of the television sets. Owing to the above mentioned factors COVID-19 pandemic is expected to hamper the growth of the Conditional Access Systems during the forecast period.

The penetration of digital television is expected to surge rapidly especially in Brazil, Argentina, and Mexico. In addition, the markets in these countries are increasingly shifting toward the adoption of advanced television services such as HD television. Thus, most of the CAS providers focus on delivering content protection solutions for television. Furthermore, Internet services such as subscription-based on-demand video and IPTV have been fairly popular in Latin America for the past few years. Brazil, Argentina, and Mexico are major contributors to such Internet services, creating significant demand for the respective content protection solutions.

One of the major concerns for CAS solutions is unauthorized access to the confidential content. If the security measures are not stringent enough, it could lead to data breach in access control environment. Furthermore, security concerns regarding unauthorized access are expected to hinder the global conditional access systems market growth over the forecast period.

Europe has witnessed strong penetration of IPTV services during the past few years. The penetration rate of IPTV and other Internet-based services is high in countries such as France, Germany, the U.K., and other Western European countries. Thus, the deployment of conditional access systems for IPTV set-top boxes is one of the most popular trends in Europe. After internet services, the digital radio segment is predicted to witness the highest growth in the conditional access systems market in Europe. Currently, countries such as the U.K., Norway, Denmark, and Switzerland are the largest markets for digital radio service making them the largest markets for CAS for digital radio in Europe. 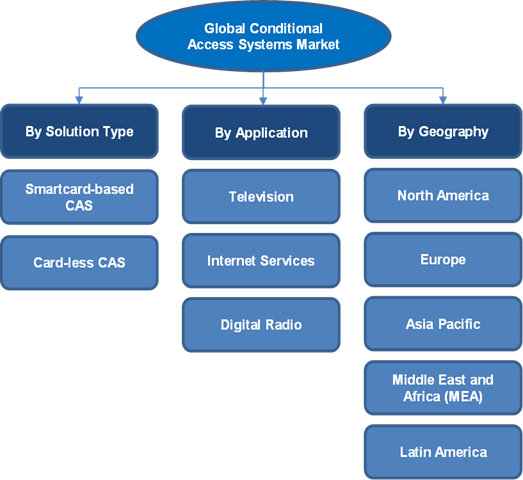