Footwear is designed to wear on feet and is used to cover the feet from ground texture, toads, gravels, etc. They are produced from different materials such as rubber, plastic, leather, and fabric. Out of which leather is one of the most popular materials used for the manufacturing of footwear. Nowadays manufacturers are also used eco-friendly raw materials such as organic cotton and recycled car tires to produced footwear.

Increasing production and exports of footwear is projected to offer lucrative growth opportunities over the forecast period. According to the World Footwear Yearbook, Global production of footwear reached a record of 24.3 billion pairs in 2019. According to the World's Top Exports, global sales from leather shoe exports in 2019 totaled US$57.4 billion. Year over year, exported leather shoes increased by 6.8% from 2018 to 2019. Thus increasing production and exports of the footwear is projected to foster market growth over the forecast period.

Growing piracy in the global footwear market is creating a negative image on the market and also consumers. Piracy disturbs the distribution system of the industry. Hence, growing piracy is projected to hamper the market growth of footwear over the forecast period.

The global footwear market growth is expected to decline significantly due to the Covid-19 pandemic. Globally, as of 6:28pm CEST, 14 September 2021, there have been 225,024,781 confirmed cases of COVID-19, including 4,636,153 deaths, reported to WHO. A survey carried out by Confcommercio, the Italian retailers' association, showed that sales of footwear and clothing have fallen to zero for stores not equipped with usan e-commerce platform after Italy entered a nationwide lockdown in March 2021. 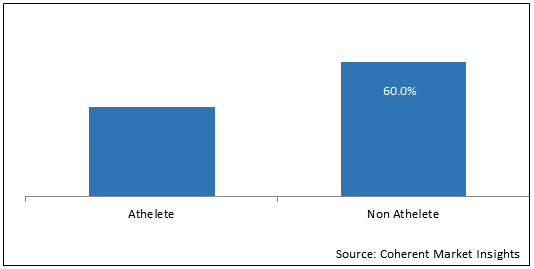 Increasing participation of people in sports activities due to growing health and wellness trend is driving demand for athletes' footwear. For instance, in March 2020, HOKA ONE ONE®, a division of Deckers Brands, announces the launch of its footwear for athletes. These shoes maximize both performance and comfort and also solve everyday problems for all athletes. Hence, the growing demand for athletes' footwear due to increasing participation of people in sports activities is propelling the market growth of footwear over the forecast period.

Growing strategic distribution partnerships and agreements between key manufacturers for business expansion on regional as well as global level is a growing trend in the market. For instance, in July 2019, Moreschi has entered into a strategic partnership with Metro Shoes to sell its products at the latter’s outlets across the country. With this partnership, Moreschi’s range of footwear, wallets, and belts for men and women at a price range of Rs 39,990 ($583) to 49,990 will be housed at Metro shoe outlets in India.

In September 2019, Adidas has launched SENSEBOOST GO which is suitable for city runners. The SENSEBOOST GO shoes have a lightweight knit upper that follows the natural movement of the stride.