Footwear is a type of apparel intend to wear on the feet in order to protect from various environmental factors such as ground texture and temperature. Footwear includes shoes, boots, and sandals. The footwear’s basically serve the function of preventing injuries and ease the locomotion. They can be classified into athletic footwear, hiking shoes, sneakers, sports, non-athletic footwear, and others.

Asia Pacific held dominant position in the global footwear market in 2020, accounting for 43.2% share in terms of value, followed by Europe and North America, respectively. Increasing population in Asia Pacific countries such as China and India has led to rise in demand of footwear in the region. 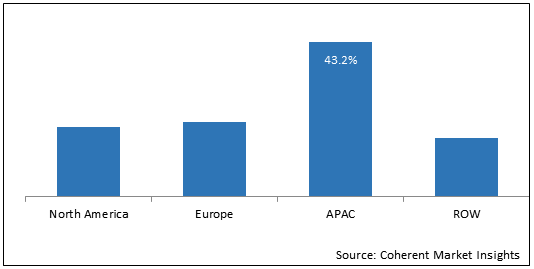 The growing demand for footwear with innovative designs is driving the market growth of footwear. This is attributed to the growing adoption of western cultures coupled with the emerging fashion and market trends. Also, rising awareness regarding the active and healthy lifestyle is fueling demand for orthotic footwear. Moreover, improving standard of living and healthy lifestyle is shifting consumers' preferences towards fitness footwear like running shoes which is again augmenting the market growth of footwear.

The increasing population along with their income levels is propelling the market growth of footwear. According to the United Nation, the world population is projected to reach 8.5 billion in 2030, and to increase further to 9.7 billion in 2050 and 11.2 billion by 2100. 61 percent of the global population lives in Asia (4.7 billion). Thus, the growing population around the globe coupled with the increasing disposable income of the consumers is escalating the market growth of footwear.

Expanding e-commerce industry is creating potential market opportunities for the footwear market. This is attributed to the increasing penetration of the internet and smartphones which is boosting online transactions. According to the, We Are Social Ltd., the number of people using the internet has surged over the past year, with more than one million people coming online for the first time each day since January 2018. There were 4.39 billion internet users in 2019, an increase of 366 million (9 percent) versus January 2018.

Changing fashion trends around the globe is driving demand for designers' footwear. A growing number of the female working population is also fueling the sales of designers' footwear. Robust growth in the fashion industry due to growing awareness regarding the fashion sense is again driving the market growth of footwear. Furthermore, the rise in the textile and clothing industry is also projected to augment the market growth of footwear over the forecast timeframe. 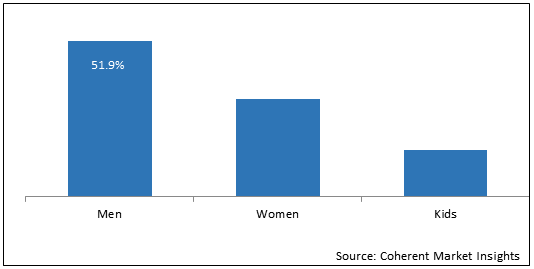 Increasing prices of raw material used to produce footwear are hampering the production of footwear. This, in turn, is creating a gap in demand and supply. Thus the growing price of raw materials used for footwear is expected to restrict the market growth over the forecast period.

In December 2019, Puma launched an £80 pair of shoes designed to be worn while playing video games.

Global footwear market is going to be dictated by the wide assortment of product innovation and product improvement. Technological, geographical, and marketing space are the three main determining factors as to which the market is categorized. Men's footwear is witnessing a number of technological innovations like faster-paced production, innovative styles, and quality materials. On the other hand, women's footwear will be defined by the variety of products, designs, styles, price, and functionality.

The footwear market is booming due to the increasing demand in the consumers and also the introduction of new styles that have become very popular among the women. Some of the major reasons that have led to the positive forecast period in the apparel industry are: the rise in global economy; better consumer spending power; increase in disposable income of consumers; and introduction of various new styles and brands. There are also some other factors that have helped in the successful movement of the market such as: the rising popularity of brands; introduction of online shopping; and an enhancement in the business infrastructure.

Launch of new products is expected to propel growth of the global footwear market over the forecast period. For instance, in September 2021, Nike launched annual Oklahoma Sooners-themed shoe collection.

R&D of AI-powered footwear is expected to offer lucrative growth opportunities for players in the global footwear market. For instance, in December 2020, Plantiga Technologies, an AI-powered human movement intelligence company, partnered with Original Footwear, a manufacturer of occupational and tactical footwear for military, law enforcement and first responders, to build AI-powered occupational footwear.

Growing demand for footwear with innovative designs and increasing population along with their income levels are the factors fuelling growth of market.

Which is the leading consumer group segment in the market?

Men segment is the leading component segment in the market.

Increasing prices of raw materials and growing environmental concern declining the demand for rubber, leather, and plastic footwear are factors hindering growth of the market.

Why is the Asia Pacific region dominating the market?

Asia Pacific is expected to hold dominant position in the market over the forecast period. The growth of the market in the region is driven by increasing population in Asia Pacific countries such as China and India has led to rise in demand of footwear in the region.