The global LNG as a bunker fuel market was valued at US$ 94.7 million in 2020, according to LNG as a Bunker Fuel Market Report, by Vessel Type (Offshore Tugs & Services, Ferries, Oil & Chemical Tankers, Container Ships, Gas Carriers, General Cargo, and Others), and by Region (North America, Latin America, Asia Pacific, Europe, and Middle East & Africa), published by Coherent Market Insights.

The global LNG as a bunker fuel market is expected to surpass US$ 627.53 million by 2028, exhibiting a CAGR of 28.10% during the forecast period (2021-2028). Various national, regional, and sub-national regions such as China, Malaysia, Singapore, and the Panama Canal have banned the use of open loop scrubbers. Ship operators have been using LNG as a fuel as it is cheaper than other conventional fuels and also offers various advantages such as low sulfur, nitrogen oxide (Nox), CO2 emissions, and others. These factors are expected to drive growth of the LNG as a bunker fuel market globally over the forecast period.

Key Trends and Analysis of the LNG as a Bunker Fuel Market:

Key Takeaways of the Market: 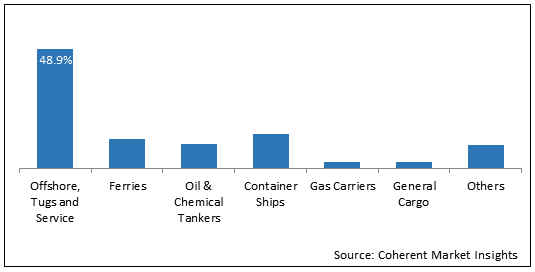 LNG bunkering is the practice of providing liquefied natur...