LNG bunkering is the practice of providing liquefied natural gas fuel to a ship for its own consumption. Ship owners have turned to liquefied natural gas (LNG) as the bunker fuel of choice to curb air pollution from shipping, since it emits significantly fewer air pollutants and contains 30% less carbon than HFO (Heavy Fuel Oil).

Strict regulations on marine fuel emissions coupled with advantages offered by LNG has been augmenting the target market growth. Stringent rules, regulations, and environmental policies designed to control or reduce marine emissions are favoring demand and adoption of cleaner fuels. For instance, the International Maritime Organization (IMO),  the United Nations specialized agency with responsibility for the safety and security of shipping, stated that from January 01, 2020, sulphur limit in fuel oil used in board ships should be reduced to 0.5% m/m (mass by mass). In order to meet the IMO regulations, ships will have to use fuel oil which has low sulphur content. This is expected to drive demand for LNG as a bunker fuel across the globe as LNG enables almost complete reduction of sulphur oxide emissions and has very significant NOx and CO2 emissions.

Low cost of LNG is expected to foster the market growth of LNG as a bunker fuel. The fuel cost is a key factor for ship operators as it represents roughly 60 to 80% of the total operating costs. LNG is, and has been, less expensive than marine gas oil (MGO), very low sulfur fuel oil (VLSFO), and HFO (in some regions). Thus, using LNG as a fuel can bring down the operating costs of the vessel drastically and benefit ship operators. This is creating a favorable growth environment for the global LNG as a bunker fuel market.

Among regions, Europe held dominant position in the global LNG as a bunker fuel market in 2020, accounting for 76.2% market share in terms of revenue, followed by North America. 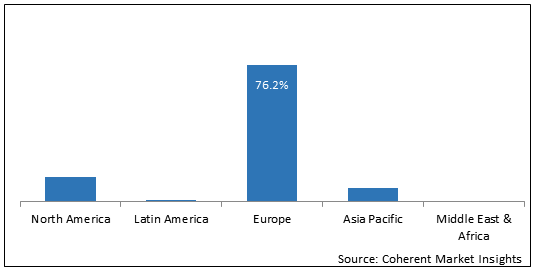 Limited LNG infrastructure and high cost of LNG-fueled vessels is expected to hamper the market growth of LNG as a bunker fuel over the forecast period. LNG-fueled vessels can be operated on very limited routes owing to relatively smaller number of ports providing LNG as a bunker fuel. Moreover, the costs of renovating conventional ships to use LNG as a fuel and LNG bunkering infrastructure are quite high.

On the basis of vessel type, in 2020, offshore tugs & service segment accounted for 48.9% of the revenue share. Offshore vessels are designed to perform operational purposes such as oil exploration and construction work at high seas. Offshore vessels can be classified into oil exploration & drilling vessels, offshore support vessels, offshore production vessels, and construction or special purpose vessels. 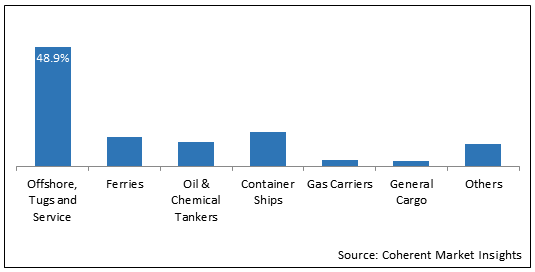 Curtailment of global economic activity has put a break on fuel oil use for shipping. For instance, according to International Energy Agency, demand for natural gas declined by around 2% in Q1 2020, with China, Europe, and the U.S. experiencing the most significant declines. Moreover, according to the same source, LNG imports in Japan fell by 3% in Q1 2020 relative to Q1 2019, while in South Korea domestic sales of LNG for January and February in 2020 fell by 2.5%.  Furthermore, average price of Brent crude, West Texas Intermediate, and Dubai crude hit the lowest monthly average since January 2016 falling to US$ 32.98/bbl, US$ 29.88/bbl, and US$ 33.75/bbl, respectively The lower crude oil prices are expected to negatively impact demand for LNG as a marine fuel.

LNG as a fuel results in the vast reduction in pollutant caused by the more traditional method of fuelling ships including marine diesel fuel (MDO), heavy fuel oil, and marine gas oil (MGO). The LNG bunkering between ship to ship or shore to ship is done by using a QC (Quick Connect Disconnect) coupling.

Various advantages offered by LNG is driving the target market growth. Various end users are expected to focus on replacing conventional fuels such as marine diesel oil (MDO) and heavy fuel oils (HFO) with LNG. LNG has high combustion efficiency, lower volume compared to natural gas, emits 90% less nitrogen oxides (NOx) than MDO and HFO, and has virtually no particulate matter and sulphur oxides emissions. This has led to rampant adoption of LNG as a fuel across the marine industry.

For instance, according to the World Ports Climate Initiative, regulations regarding sulfur content in fuel and nitrogen oxide (NOx) emissions are becoming stricter in the marine industry. Moreover, in April 2018, International Maritime Organization, operates as an agency within the United Nations, had set targets to cut the shipping sector's overall CO2 output by 50% by 2050. By using LNG as a fuel, CO2 emissions can be reduced as emission factor of LNG is only 2.75 (g/g of fuel), whereas emission factors of other conventional fuels such as HFO and MDO are 3.114 and 3.206 respectively.

Key players in the market are focusing on various strategies such as collaborations. For instance, in September 2019, Gazprom, Gazpromneft Marine Bunker (subsidiary of Gazprom), and United Shipbuilding Corporation (shipbuilding company in Russia) entered into a partnership to expand use of LNG as a fuel for marine transport in Russia. The parties cooperated to develop LNG powered ships and building infrastructure for LNG bunkering.

Strict regulations on marine fuel emissions coupled with the advantages offered by LNG is expected to drive the market growth during the forecast period.

Increasing subsidies on LNG-fueled vessels is the current LNG as a bunker fuel market trend.

Limited LNG infrastructure and high cost of LNG-fueled vessels is expected to hamper the market growth of market over the forecast period.

The gas diffusion layers (GDL) are a fibrous porous media ...

Bunker fuel is meant to be used by the shipping industry f...

Petroleum coke is a by-product of crude oil and is look li...

Biomass is defined as the biologically degradable fraction...