Social Gaming Market Is Expected to Witness CAGR of 16.1% During the Forecasted period (2019-2027) - Coherent Market Insights

Social gaming mostly refers to online gaming that allows for social interaction between players. These games may include board games, card games, and social network games as well as interactive multiplayer video games. Two or more people engage themselves in competing with each other online and socially interacting with friends, family, and colleagues. These games often act as a stress-buster for the working class, students, and housewives.

The number of internet subscribers globally has increased massively over the years, in both developed and emerging economies. According to the Internet World Stats, there were over 4 billion internet users across the globe as of June 2020, with a 62% increase in penetration. Internet is available in schools, offices, colleges, and leisure places such as restaurants and malls. Furthermore, access to social networking sites through the internet has made users cling to games, which have helped them engage socially. With the advancement in technology from 2G to 3G and now 4G internet services, the gaming industry is expected to reap the benefits of the growing internet subscribers. The 3G network enables the transfer of information at the rate of at least 200kbit/s, enhancing the gaming experience. Therefore, these factors are expected to propel the global social gaming market growth over the forecast period.

Key companies are focused on research and development activities, in order to enhance the market presence. For instance, in May 2013, Zynga Inc. launched Running with Friends, a 3D action, high-speed arcade game, for the global audience on iPad, iPhone, and iPod touch. In July 2013, CrowdStar launched COVET Fashion, a fashion game for iPads and iPhones. The game incorporates seasonal designs with real-life clothing items and virtual outfit challenges.

Key players in the market are focused on collaboration and partnership activities, in order to enhance the market presence and gain a competitive edge in the market. For instance, in December 2012, King partnered with Turkish Pepsi. According to the agreement, the Bubble Switch Saga title will be printed on the cans as part of the marketing strategy along with codes that unlock credits. In November 2012, CrowdStar partnered with Tencent Holdings Ltd. to launch Top Girl, its popular game, in the world’s most populous nation, China.

Major companies involved are focused on merger and acquisition activities, in order to expand their market strength. For instance, in December 2011, Electronic Arts Inc. acquired KlickNation, a company that develops role-playing games on Facebook for free. Furthermore, in July 2011, Electronic Arts acquired PopCap Games Inc., a company that developed popular games such as Bejeweled and Plants vs. Zombies. Electronic Arts, Inc. expects to increase its presence in casual and mobile gaming through this deal. 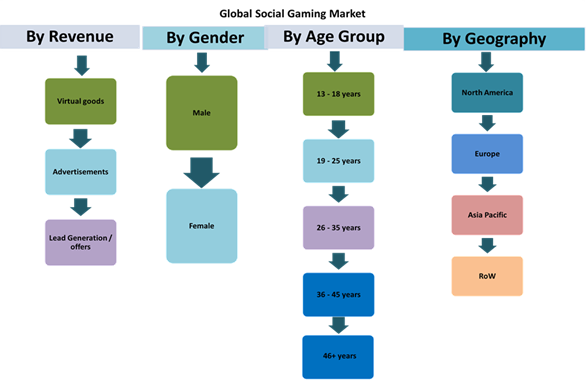