Active Pharmaceutical Ingredients Market to Surpass US$ 274.9 Billion by 2026

API is a main ingredient, which helps to cure a disease or disorder. APIs provide health benefits and are used in disease diagnosis, prevention, and treatment. APIs cannot be used in the raw form, as it is the crude form of drug, which will not meet the appropriate pharmacodynamics and pharmacokinetics parameters. Certain drugs such as combination therapies have numerous active ingredients, which treats different symptoms or act in different ways. Manufacturers use different standards to determine the strength of an API. However, the standard differs from one brand to another, as per the company choice. 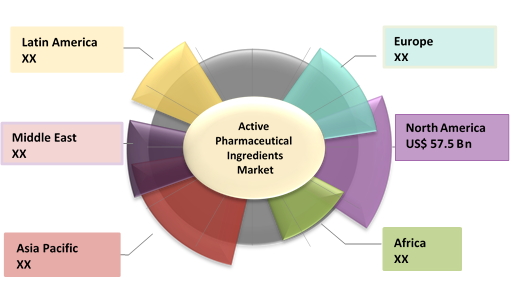 Increasing prevalence of chronic diseases is expected to increase the demand for drugs, which in turn is expected to fuel the active pharmaceutical ingredients market growth in the near future. According to the World Health Organization (WHO), mortality and global health estimates of 2015, ischemic heart disease, stroke, chronic obstructive lung disease, and lower respiratory infections have been the cause for maximum number of deaths during the past decade. Moreover, diabetes caused 1.6 million (2.8%) deaths in 2015, from 1.0 million (1.8%) deaths in 2000. Deaths due to dementia doubled between 2000 and 2015, making it the 7th leading cause of global deaths in 2015.

Cardiovascular diseases account for most of the NCD deaths, with 17.7 million deaths annually, followed by cancers (8.8 million), respiratory diseases (3.9million), and diabetes (1.6 million) contributing to over 80% of all premature NCD deaths, as per World Health Organization (WHO).

Changing lifestyles and unhealthy diet patterns, which include consumption of junk food, tobacco, and alcohol are some of the factors making future generation more prone to diseases due to a weak immune system. Therefore, increasing prevalence of non-communicable diseases is expected to increase the demand for drugs, which in turn is expected to drive growth of the active pharmaceutical ingredients market in the near future.

Several active pharmaceutical ingredients manufacturers are expanding their presence across the globe. The active pharmaceutical ingredients (API) manufacturers are establishing their commercial production units in Asia to remain competitive and gain advantage over other competitors. For instance, BASF is planning to build a new specialty amines plant at its existing site in Nanjing Chemical Industry Park, China. This new multi-product plant will be able to manufacture 21,000 metric tons of amines per year and it extends BASF’s amines portfolio at the specialty amines complex in Nanjing. The plant is scheduled to stream by 2019.

Moreover, in April 2018, STA Pharmaceutical, a subsidiary of WuXi AppTec, signed an investment agreement with the government of Shanghai to build a new research & development (R&D) center for APIs and intermediates located next to the company’s existing Jinshan drug-substance manufacturing site. The company will add over 30,000 square meters of laboratory space and 500 scientists.

Furthermore, in October 2017, a small active pharmaceutical ingredients manufacturer Alcami, opened an office in Tokyo, Japan, as part of its effort to expand drug development and manufacturing in Japan.

Active Pharmaceutical Ingredients (API) are active constituents used in the manufacturing of pharmaceutical formulations and have pharmacological and therapeutic effects on the body. Since APIs cannot be used in the raw form, they are combined with the suitable excipients, which are pharmacologically and therapeutically inactive but enhance its stability and activities.

Increasing prevalence of chronic diseases, geographical expansion of active pharmaceutical ingredient manufacturers in Asia, and increasing investment in research and development by manufacturers are some of the major factors that are expected to drive the market growth. Furthermore, increasing production of generic drugs is in turn driving growth of global active pharmaceutical ingredients market. For instance, according to the Indian Brand Equity Foundation (IBEF), in 2018, India was the largest producer of generic medicines, which supplied 50% of vaccines and 40% of drugs to the U.S. and 25% of drugs to the U.K. However, unfavorable drug price control policies across various countries is expected to negatively affect growth of the market.