The global alfalfa hay market size was valued at USD 73 million in 2021 and is anticipated to witness a compound annual growth rate (CAGR) of 6.6 % from 2022 to 2030. The demand for alfalfa hay is expected to grow significantly during the next few years. This market is driven by growing meat and dairy consumption, as well as increased income levels of consumers. The livestock industry is also experiencing significant growth, and pig meat is currently the world's top meat that is consumed worldwide. Agricultural research is one of the major factors driving the alfalfa hay market growth. Water shortage and a lack of irrigation are two major factors limiting the market growth. In addition, the market will exhibit an overall positive trend owing to rising livestock feed consumption in developing economies.

Asia Pacific is expected to witness fastest growth in the global market over the forecast period owing to the strong presence of dairy industry which is increasing consumption of hay. According to USDA report 2017, China recorded more than 15 million cows in the dairy industry, which consumed high-quality alfalfa hay, and the population of cattle enhanced from 82.2 million in 2015 to 83.3 million in 2017. Thus, the population is expected to rise as well as the demand for hay is likely to be more than 8 million metric ton in the future. 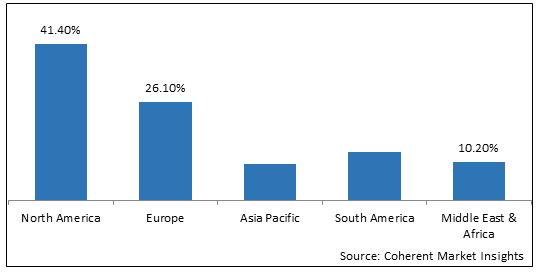 Increasing livestock production is again projected to foster market growth. According to the Food and Agriculture Organization (FAO), global meat consumption increased significantly over the past 40 years, particularly in developing countries. This led to an increase in the number of industrial livestock production, which is expected to boost the demand for alfalfa hay, globally. The global cattle population experienced a CAGR of 0.87% during the period 2015-2017, an increase from 288,286’000 heads to 296,618’000 heads.

Decreasing area for grazing is boosting production of alfalfa. This is projected to provide significant growth opportunities over the forecast period. According to the Coherent Market Insights analysis, the production of alfalfa has been increasing from the past years all over the world which is valued at 213,450.8 in 2019 and is expected to increase over the coming years with a CAGR of 5.8%.

The low calorie, high fiber, quality, high vitamins and minerals, and protein content of alfalfa hay makes it the most suitable hay for feeding dairy animals. Growing awareness regarding the health benefits of alfalfa hay is expected to hold potential growth opportunities for market in the near future.

Ban on forage crop production in Saudi Arabia is projected to hamper the market growth over the forecast period. For instance, in the beginning of 2016, the Saudi Arabian government embarked upon a 3-year program to conserve water resources by greatly reducing its domestic production of alfalfa and other commodities important for dairy and livestock production.

High production of forage is another key factor expected to hinder the market growth. For example, seed variety costs can vary up to USD 30 per acre, between ‘variety not stated’ (VNS) seed to a top-yielding new variety with enhanced germplasm. 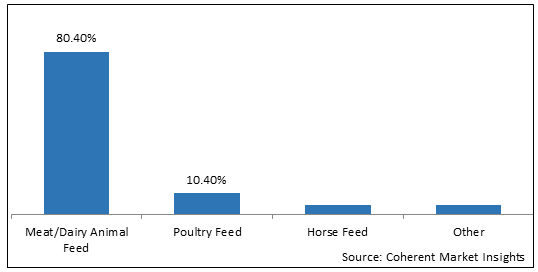 The global alfalfa hay market report is segmented into type, application, and geography

Based on type, the market is segmented into bales, pellets, and cubes. Out of which, Pellets is expected to dominate the global market over the forecast period as they are highly nutritious feed. Moreover, they are rich in vitamins and minerals, which are especially necessary in hot or humid climates. The pellets segment of the alfalfa hay volume marked at 88,214.0 thousand metric ton in 2020, and it is projected to reach 1, 33,542.3 thousand metric ton by 2027, witnessing a CAGR of 5.9%, during the forecast period.

Based on application, the market is segmented into Meat/ Dairy animal feed, Poultry feed, Horse feed, and other applications. Out of which, Meat/ Dairy animal feed is expected to dominate the global market over the forecast period and this is attributed to the nearly 80% of the alfalfa hay is utilized by the cattle animals or meat/dairy animal feed segment. Increasing meat production worldwide is also fueling segment growth. According to Food and Agriculture Organization statistics, the meat production has increased from 36, 76,366 tons in 2016 to 37, 83,441 in 2018 and the milk production has increased from 812.29 million tons in 2016 to 843.03 million tons in 2018. The increased production of meat and dairy can be attributed to the higher livestock farming.

Poultry feed segment is also expected to witness significant growth in the near future owing to the growing demand for poultry meat due to changing lifestyle of consumers. The poultry feed segment of the alfalfa hay volume marked at 25,191.0 thousand metric ton in 2020, and it is projected to reach 35,633.9 thousand metric ton by 2027, witnessing a CAGR of 4.7%, during the forecast period.

In April 2017, Anderson Hay & Grain Co., Inc., the number one hay exporter from the USA, entered a joint venture (JV) with Agthia Group, the market leader for animal feed in the UAE. A new company is being formed, which is primarily involved in importing Anderson’s premium forage products from the USA, to be distributed in the UAE and the GCC. The products will be sold under the new JV product brand, Agrivita Marabe.

*Definition: Alfalfa hay is a popular feed source for animals and is highly nutritious. It is high in protein and fiber and is free of harmful components. In addition, it is palatable, which makes it ideal for animal consumption. It is cultivated in many countries worldwide, and can be harvested several times each year.

Alfalfa, also known as lucerne, is a legume crop that grows in the legume family Fabaceae. It is a major forage crop in many countries, and is used in many applications, including hay and silage. Alfalfa hay contains high amounts of protein, calcium, and vitamins. It is also a great source of energy. Because alfalfa is a legume, its roots work with bacteria in the soil to convert nitrogen in the air into plant protein. These nutrients make alfalfa a superior feed for animals.

The global alfalfa hay market is growing on the account of increasing population and increasing livestock numbers.  The increased awareness of the importance of high-quality forage will fuel industry expansion in the coming years. The growing use of alfalfa hay by farmers will also lower transportation costs and environmental risks. As the demand for meat and dairy products continues to rise, the market for alfalfa hay will continue to grow. Growth in the dairy industry is further fueled by a number of factors, including increasing urbanization and population.

However, the market has experience some disruptions in 2020 due to the COVID-19 outbreak, which disrupted the supply chain in the industry. As a result, uncertainty in the industry was felt across various sectors.

The Meat/Dairy Animal Feed Application segment is the leading component segment in the market.

Ban on forage crop production in Saudi Arabia and high production of forage are the major factors restraining market.