The global Food Allergen Testing market size was valued at USD 721.49 million in 2021 and is anticipated to witness a compound annual growth rate (CAGR) of 7.26% from 2022 to 2030. The food allergen testing market is expected to witness significant growth over the forecast period due to rising consumer awareness. Consumers are demanding fresh and healthier foods for which manufacturers are adopting strignant food safety standards. Additionally, the prevalence of food allergy in children is on the rise which is again propelling growth of the food allergen testing market.

Regionally, North America is expected to dominate the global food allergen testing market over the forecast period owing to the presence of strict regulation pertaining to packaged food label. For instance, The Food Allergen Labeling and Consumer Protection Act of 2004 mandated the packaged food labels to include declarations of these eight major food allergens either in the ingredient list or via a separate allergen statement. Additionally, increasing prevalence of food allergy among consumers is again propelling regional market growth. For instance, according to a Journal of Allergy and Clinical Immunology, one in every 13 Canadians suffer from a significant food allergy. The prevalence of food allergen in the country and consumers’ increasing health consciousness in the country have resulted in the development of various food allergen testing technologies to meet the burgeoning demand from both food retailers as well as consumers.

Asia Pacific is also expected to witness fastest growth in the global over the forecast period owing to the high prevalence of allergy among population which is encouraging food manufacturer to adopt food allergen testing for each food products. According to the Population Reference Bureau, children in China have higher allergy prevalence rates than adults, and the Population Reference Bureau indicates that between 3.8% and 7.7% of infants in China have food allergies. The  FARRP  (Food  Allergy  Research  and  Resource  Program)  has  released  an International Regulatory Chart in November 2019 consisting of food products mostly causing allergies among consumers in China, which include crustacean shellfish, egg, fish, milk, peanut, soy, tree nuts, and wheat. This resulted in an increasing number of manufacturers adopting for food allergen testing for each of these products. 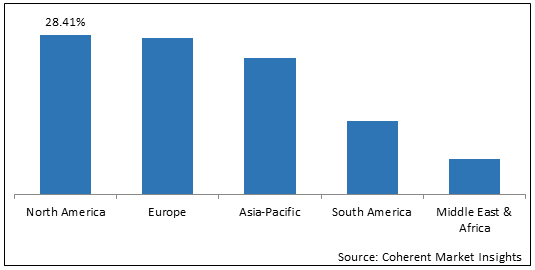 Rise in prevalence of food allergies among population is a prime factor propelling growth of the food allergen testing market. For instance, the National Institute of Allergy and Infectious Diseases estimates that about 5% of children and 4% of adults in the United States have a food allergy. This is a 20% increase in childhood food allergies, over the last 20 years. Globally, food allergies affect 250 million to 550 million people in developed and developing countries.

Favorable government policies and regulation is again expected to augment the market growth. The US FDA is the body responsible for the regulations of processed food in the United States. The Food Allergen Labeling and Consumer Protection Act (FALCPA) developed by the FDA is the primary federal law governing how allergens are represented on packaged foods sold in the United States. The  Allergen  Bureau,  the  peak  industry  body  representing  food  industry  allergen management in Australia and New Zealand, has introduced various programs under the name VITAL (Voluntary Incidental Trace Allergen Labelling), a standardized allergen risk assessment process for the food industry.

Growing innovation in the field of food allergen testing market is projected to serve major growth opportunities over the forecast period. For instance, in March 2019, Neogen Corp.,  an  international  food  safety  company, offers test kits and relevant products and launched simple and accurate  tests  for  coconut  in  foods,  beverages,  and  environmental samples. Neogen’s new Reveal® 3-D for Coconut Allergen screens environmental and liquid samples at 1 part per million (ppm) in only five minutes. The new Veratox® for Coconut Allergen provides precise results in the range of 1 to 25 ppm for testing food and beverage samples.

Growing penetration of lollypop-shaped device, called Ally is expected to bring bright market opportunities for key players over the forecast period. The technology can analyze whether food contains lactose or not. Its name comes from a play on the words, “allergies” and “ally”, as in “friend”.

Smartphone-connected device is gaining momentum in the market due to growing trend of digitalization worldwide.  For instance, Nima Labs (formerly known as 6Sensor Labs) has introduced the Nima Peanut Sensor, the second in a planned line of connected devices that can scan foods for evidence of a particular allergen. The device can evaluate 10 parts per million or more peanut protein with 99.2% accuracy.

Allergy rapid test are currently trending in the market as these device do not take much time to evaluate allergen present in the food. For instance, FastCheckPOC® 20 rapid allergy test entails some of the most prevalent allergies, inhalation, and food, worldwide. FastCheckPOC® 20 is ideal for healthcare professionals to screen their patients for allergies during consultation.

Lack of standardization in allergen testing practices is a prime factor expected to hamper the market growth over the forecast period.

Technical challenges associated with the sampling, testing, and protein identification could act as a restraint for the market over the forecast period. 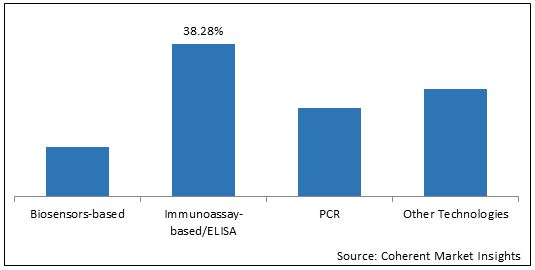 PCR (Polymerase Chain Reaction)-based segment is also expected to witness significant growth in the near future and this is owing to the growing advancement in the PCR testing technology. For instance, in April 2019, NSG Group launched a mobile real-time PCR device, PicoGene PCR1100, catering to a variety of areas, such as environmental testing, water quality inspection, and food hygiene, along with the detection of food allergens.

Based on food tested, the market is segmented into Processed Food, Baby Food, and Beverages. Out of which, Processed Food is expected to dominate the global market over the forecast period and this is attributed to the growing demand for bakery and confectionery food products. The bakery and confectionery sub-segment was valued at USD 128.16 million in 2018, and it is projected to reach USD 178.90 million by 2024, registering a CAGR of 5.83% during the forecast period (2019-2024).

Beverages segment is also expected to witness significant growth in the near future and this is owing to the growing concern over allergen presence in the beverage, due to this key manufacturer are offering screening food testing kits. For instance, in March 2019, Neogen launched S-ELISA-based coconut food allergen test kits. Neogen's new Reveal® 3-D for Coconut Allergen screens liquid food and beverage samples at 1 part per million in only five minutes, together with providing precise reading.

Food allergen testing is an important step in the allergy prevention process. Allergen testing can detect the concentration of allergens in food and alert consumers to possible hazards. When it comes to allergen detection, it's critical that food manufacturers use a reputable, accredited laboratory for the job. These laboratories are required by law to use the latest guidelines in allergen testing.

Food allergies is a growing public health problem. About two to four percent of the population suffers from an allergy. Children, in particular, are especially susceptible. They are twice as likely to develop other allergic conditions. The growing number of people affected by food allergies is driving the growth of the global food allergen testing market. Moreover, the food & beverage industry is expanding globally, providing opportunities for the food allergen testing market. Increasing international trade has led to a number of regulations governing food safety and labeling.  Furthermore, the population growth and urbanization has also increased food consumption. As a result, the market is expected to grow at a faster rate over the forecast period.

On contrary, lack of food control infrastructure & resources across developing countries is projected to hamper the market growth.

Rise in prevalence of food allergies among population and favorable government policies and regulation are fuelling the growth of the market.

The Immunoassay- based/ELISA segment is the leading component segment in the market.

Lack of standardization in allergen testing practices is the major factors restraining growth of the market.