Press Release: Amniocentesis Needles Market to Surpass US$ 208.6 Million by 2026

Amniocentesis Needles Market to Surpass US$ 208.6 Million by 2026

Amniocentesis is a prenatal test in which a small amount of amniotic fluid is removed from the sac surrounding the fetus for testing. The test is used for detection of genetic abnormality, sex determination, and paternity testing. According to American Pregnancy Association (APA) report of 2016, Amniocentesis test is to be 99.4% accurate. There are various types of needles available for amniocentesis test such as 20 G (gauge), 21 G, and 22 G to 29 G. The most suitable needle for the use of amniocentesis test is 20 G to 22 G for the normal Body Mass Index (BMI) of a pregnant woman that is from 18.5 kg/m2 to 24.9 kg/m2. Maximum maternity hospitals recommend mothers to take amniocentesis test, who are aged 35 years and above. According to a data published in UT Southwestern Medical Centre in 2017, women over age 35 years are at higher risk for giving birth to a child with Down syndrome. 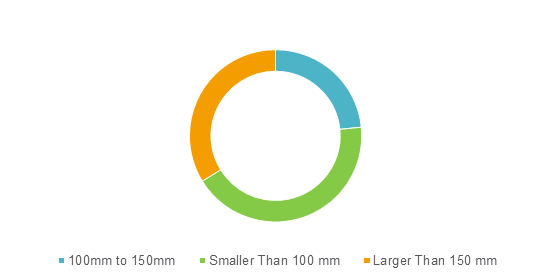 Global amniocentesis needles market size is expected to expand significantly, owing to increasing demand for amniocentesis, eventually creating demand for more research and developments of new techniques and applications. For instance, in 2018, a team of researchers of Complete Genomics in San Jose, California, showed that amniocentesis linked with whole-genome sequencing (WGS) can be used to analyze a fetus' entire genome for harmful mutations. The team collected amniotic fluid from 31 pregnant women and isolated DNA from both the amniotic fluid and the fetal cells within it. Overall, the researchers found that WGS determined up to 97% of the fetal genome with accuracy.

The major restraining factor for the global amniocentesis needles market growth is availability of alternative tests for the amniocentesis. The alternatives tests include Non-Invasive Prenatal Test (NIPT), first trimester combined screening, second trimester quad screen, and integrated screening. Increasing adoption of NIPT by patients is hampering the global amniocentesis needle market as the NIPT is associated with less incision, less pain, and quick healing. According to the data published in Clinical Chemistry Journal in 2017, several U.S. and global clinical laboratories have licensed the needed intellectual property to allow for NIPT to be implemented in as many as 15 U.S. laboratories by the end of 2017. In the U.S. nearly 3000 women were screened, while testing was offered at no charge to the patient in 2017.

Europe amniocentesis needles market is expected to foresee a rapid growth during the forecast period, owing to the rising government initiatives and reimbursements policies for amniocentesis tests. According to the data published in Patients Platform Limited in 2016, annually around 5% of the pregnant women (approximately 30,000 women in the U.K.) are offered an invasive, prenatal diagnostic test, usually either amniocentesis or chorionic villus sampling (CVS) for free of cost.

Amniocentesis is a process in which amniotic fluid is sampled using a hollow needle inserted into the uterus, to screen for abnormalities in the developing fetus. Amniocentesis tests can also be used for paternity tests. The collected sample from the uterus contains genetic material of the fetus, which can be used to screen the DNA of fetus and provide paternity test results. Ultrasound does not give precise information about the fetus, therefore doctors suggests an amniocentesis test to mother, if the family of the child has some history of genetic disorders. Increasing population of mothers aged over 35 to 45 years having child are always suggested to take amniocentesis test as the risks of baby having genetic disorders, fetal infections increases with age of mother.

However, amniocentesis is a safe procedure, with very low percentage of complications. The observed complications associated with the amniocentesis tests include vaginal bleeding or loss of amniotic fluid through the vagina, severe uterine cramping, high fever, redness, inflammation or infection at the site of puncture by needle, and unusual fetal activity or a lack of fetal movement. According to the American Pregnancy Association (APA) data of 2016, in U.S., the risk of miscarriage ranges from 1 in 400 to 1 in 200. In facilities where amniocentesis is performed regularly, the rates are closer to 1 in 400. Miscarriages can occur due to infection in the uterus, water breaking, or labor being induced prematurely.

What are the growth estimates for amniocentesis needles market till 2026?

The global amniocentesis needles market is estimated to surpass US$ 208.6 Million by 2026.

Which are the prominent amniocentesis needles market players across the globe?

What are the key factors hampering growth of the amniocentesis needles market?

Availability of alternative tests for the amniocentesis such as non-invasive prenatal test (NIPT), first trimester combined screening, among others is one of the major factors that is expected to hamper growth of the market over the forecast period.

What are the key factors driving growth of the amniocentesis needles market?

Increasing demand for amniocentesis, eventually creating demand for more research and developments of new techniques and applications is one of the major factors that is expected to propel growth of the market over the forecast period.

What is the compound annual growth rate (CAGR) of the amniocentesis needles market for next 8 years?

The global amniocentesis needles market is estimated to exhibit a CAGR of 3.8% over the forecast period.

Which region is dominating the amniocentesis needles market growth?

Among regions, North America is expected to hold a dominant position in the global amniocentesis needles market over the forecast period.

Safety needles are designed for delivering drugs and collecting fluids from the human body with safety featu...

Bone injection gun is an intraosseous infusion device used in immediate medical intervention. It can be used...

Oncology devices play a major role in healthcare, owing to factors such as increasing incidence of cancer in...