The increasing prevalence of respiratory diseases is expected to drive the global asthma spacers market growth during the forecast period. For instance, according to the World Health Organization (WHO), in 2017, around 65 million people suffered from moderate to severe chronic obstructive pulmonary disease, among which 3 million die every year globally. 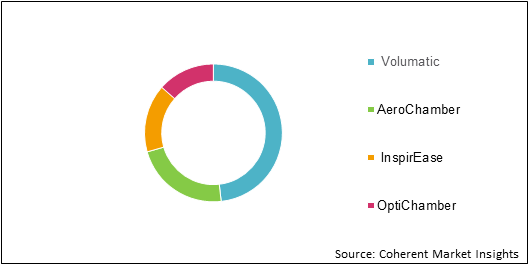 The increasing prevalence of asthma is expected to drive the global asthma spacers market growth.

Respiratory diseases such as asthma and chronic obstructive pulmonary disease (COPD) among others are highly prevalent worldwide. According to the World Health Organization (WHO), the number of people suffering from asthma as of November 2019 was around 235 million. According to the Centers for Disease Control and Prevention (CDC), around 27 million Americans were suffering from asthma in 2016. It is the most common chronic condition among American children, where 1 child out of every 12 has asthma.

Furthermore, asthma is more prevalent among the aging population which is expected to facilitate the asthma spacers market growth in the U.S. According to the World Population Ageing report, in 2017, the number of people aged 60 years in the U.S. was 69,774, and the number is projected to reach 108,425 in 2050. Furthermore, the global population aged 60 years was 962 million in 2017 and it is expected to reach nearly 2.1 billion in 2050.

Asthma can be treated with bronchial thermoplasty which is a proven alternative treatment. It is used in cases where asthma drugs do not show the desired effects or fail to cure the condition.

In bronchial thermoplasty, the inside of the lungs’ airways are heated with electrodes to shrink the smooth muscle inside the airways. It controls the ability of the airways to tighten, which makes breathing easier and reduces incident of asthma attacks.

According to data published by the National Center for Biotechnology Information in May 2015, several clinical trials have demonstrated the safety and efficacy of bronchial thermoplasty in improving quality of life and reducing events of severe asthma attacks. Thus, availability of alternative treatments for asthma are expected to hinder the global asthma spacers market growth.

North America accounted for the largest share in the asthma spacers market in 2019 as key players in the region are focusing on strategies such as mergers & acquisitions, product innovation, joint ventures, collaborations, and partnership to enhance their market position. For instance, in May 2017, Lupin Limited announced a partnership between its American subsidiary, Lupin Pharmaceuticals, Inc. (Lupin) and Albertsons Companies, to provide Lupin's InspiraChamber (a valved holding chamber for the enhanced delivery of inhaled aerosol therapies) to patients in more than 1,700 pharmacies in 35 states, including DC.

Furthermore, Asia Pacific is expected to observe the fastest growth during the forecast period owing to launch of asthma spacers. For instance, in April 2019, Cipla announced the launch of its inhaler, Niveoli, in India. It is India’s first extra-fine particle Beclomethasone-Formoterol combination Hydrofluoroalkane (HFA) inhaler for adults. It is indicated for treatment of obstructive airway diseases such as asthma. 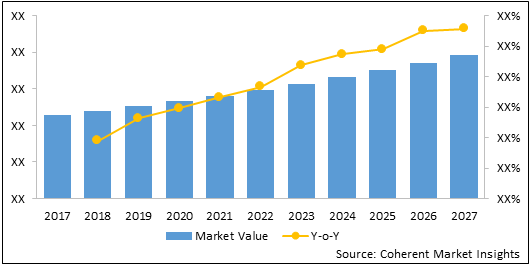 Asthma is a chronic condition in which airways in the lungs swell and narrow due to production of extra mucus which causes difficulty in breathing. Spacers are tube like devices which are attached to inhalers and used for administering aerosolized medication.

What is the estimated market size of the Asthma Spacers Market in 2020?

Which are the prominent players operating in the Asthma Spacers Market across the globe?

What is the growth estimate for the Asthma Spacers Market till 2027?

Which is the major region in the Asthma Spacers Market?

North America is the major region in the Asthma Spacers Market.

Which are the key factors driving the growth of the Asthma Spacers Market?

The increasing prevalence of asthma and initiatives by organization for asthma awareness are expected to drive growth of the global asthma spacers market.

Pulmonary drug delivery route is used to inhale medication through the respiratory tract. The medication rea...