Athletic Footwear Market, by Product Type (Specialty Sports Shoes, Running and Walking Shoes, Hiking and Backpacking Shoes and Others), by Distribution Channel (Specialty Stores, Shoe Store, Online, and Supermarket and Hypermarket), by End users (Men, Women, and Kids) and by Geography - Trends and Forecast to 2025

Athletic footwear include sneakers used in sports, exercises, walking, and hiking. The footwear include athletic shoes, tennis shoes, gym shoes, sport shoes, runners, or trainers shoes. Although they are primarily produced for sports activity or other forms of physical exercise, they are now also often used for everyday wear. The footwear have a flexible sole made of rubber or synthetic material and an upper part made of leather or synthetic materials. Athletic footwear have two basic functions: injury prevention and enhanced performance. The requirement of athletes depend on their preferences. Some are concerned about injuries, whereas some competitive athletes may choose enhanced performance over injuries.

According to Physical Activity Council (PCA), participation in fitness sports increased from 59.6% in 2011 to 62.7% in 2016 in the U.S. According to World Health Organization, globally, 1.9 billion adults were overweight of these over 650 million were suffering from obesity in 2016. Increasing inclination of consumers towards various exercises and sports, due to growing awareness of health risks of obesity such as type 2 diabetes and high blood pressure is fuelling demand for athletic footwear. Innovations in footwear such as 3D printing is also driving growth of the athletic footwear market. For instance, Adidas AG launched sneaker with 3D printed sole in April 2017. Under Armour, Inc. launched Hovr Phantom and Hovr Sonic smart shoes with tracking capabilities on distance, stride length, and others in January 2018. Rising trend of personalization and customization in footwear such as NikeId by Nike, Inc. is also another factor expected to support growth of the athletic footwear market.

Men segment accounted to be the largest end user segment in the athletic footwear market in 2016, due to high participation of men in sports and other physical activities. According to European Commission, 2013, 45% men play sport or exercise at least once a week as compared to 37% women. Moreover, 37% men never play sport or exercise as compared to 47% women in member states of the European Union.

Europe was accounted to be the largest athletic footwear market in 2016 and is expected to retain its dominance over the forecast period. This is attributed to increasing health awareness among consumers and increasing participation in sports and other physical activities. According to Sports England — which is a public body under the Department for Digital, Culture, Media and Sport — around 60.7% adults participated in sports or other exercises for over 150 minutes per week in 2016 in England.

Asia Pacific is the fastest growing athletic footwear market, owing to rising participation in sports activities and growing sports industry in countries such as India and China. According to The State Council of China, the Chinese sports industry is expected to reach US$ 460 billion by 2020. Furthermore, growing e-Commerce market is driving growth of the athletic footwear market in this region. For instance, according to IBEF (India Brand Equity Foundation), Department of Commerce, Ministry of Commerce and Industry, e-commerce industry is projected to increase at a CAGR of 28% from 2016 to 2020 to reach US$ 63.7 billion by 2020 in India. 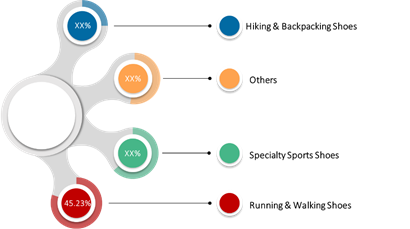 Running and walking shoes held the largest market share of 45.23% in 2016 and is expected to retain its dominance over the forecast period. This is attributed to increasing inclination of consumers towards walking and jogging for maintaining physical fitness. Accordi­ng to the U.S. Bureau of Labor Statistics, walking accounted for highest market share of 30.4% in exercise and sports activity in the U.S. from 2011 to 2015.

Running and walking shoes held the highest market share of 45.23% in 2016 and is expected to retain its dominance over the forecast period, due to increasing awareness of health benefits of running and walking such as weight management and stress management. Europe accounted for largest share in athletic footwear market followed by Asia Pacific and North America, respectively. This is attributed to rising awareness about the health benefits of exercises and sports. According to the European Union, 62% of population was engaged in sports and physical activity for improving health in European Union member states in 2013.

What are the growth estimates for athletic footwear market till 2025?

The global athletic footwear market is estimated to surpass US$ 110.19 Billion by 2025

Which are the prominent athletic footwear market players across the globe

What are the key factors hampering growth of the athletic footwear market?

Rising environmental concerns over the materials used in athletic footwear such as synthetic rubberis one of the major factors that is expected to hamper growth of the market over the forecast period.

What are the key factors driving growth of the athletic footwear market?

Increasing participation of consumers in health and physical fitness activities is one of the major factors that is expected to propel growth of the market over the forecast period.

What is the Compound Annual Growth Rate (CAGR) of the athletic footwear market for next 8 years?

The global athletic footwear market is estimated to exhibit a CAGR of 2.33% over the forecast period.

Which region held the largest market share in the athletic footwear market?

Among regions, Europe accounted for highest market share in the athletic footwear market in 2016.