Baby food is especially developed for infants and toddlers, aging between four months to two years. The soft and easily consumed food product fulfills nutritional requirement of infants and toddlers. Based on the form, baby food is majorly classified into powder, liquid and solid. The powdered form is the least expensive form of baby food and is used by mixing it with water before feeding the infant. Furthermore, solid baby food include infant cereals and other bland fare.

Increasing health awareness to provide nutrition regarding the overall development of the baby is a major factors propelling the growth of this market. Moreover, increasing prevalence of lactating problems in women including breast engorgement and nipple infection caused by staphylococcus aureus, have propelled the adoption of baby food products. Furthermore, increasing preference of organic baby food is contributing to growth of the global baby food market.

However, the declining birth rate in developed countries is a major challenge to the market growth of baby food. According to the World Bank Group, birthrates around the world declined by 45% on average, between 1960 and 2013.

Based on source type, organic baby food is expected hold dominant position with the highest CAGR during the forecast period. Increasing demand for adequate and best nutrition, increasing concern about harmful chemicals in inorganic baby foods in the form of artificial colors, sweeteners, and flavors are some of the factors driving growth of the organic baby food segment.

Based on distribution channel, the market is segmented into hypermarkets, supermarkets, drugstores, online channel, specialty stores, and others. Supermarket, held the largest market share in 2016. However, the online channel is expected to grow rapidly during the forecast period, owing to the increasing preference of online shopping among the populace in emerging economies.

In 2016, Asia Pacific dominated the baby food market in terms of revenue and accounted for a share of 37.66%, with China, India, New Zealand, Japan, Australia and Indonesia being the major contributor for baby food market growth in Asia Pacific. China dominated this market in 2016, owing to the increasing demand for safe and quality milk formula in the country. In addition to this, the growing birth rate in China is also expected to support the growth of baby food market. According to the National Health and Family Planning Commission of China, birth rate in China, had increased by 7.9% in 2016 due to the end of one-child policy that was first introduced in 1979 and formally phased out in 2015. 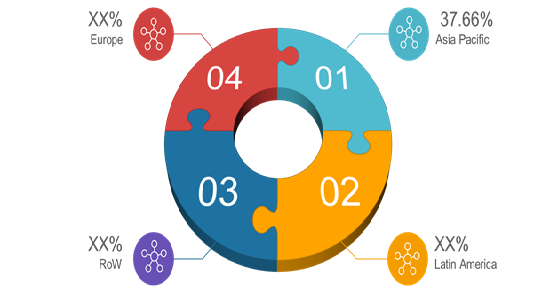 Latin America is anticipated to be the fastest growing market for baby food, witnessing highest CAGR of 7.21% during the forecast period (2017 - 2025). In 2016, Brazil dominated the baby food market and was followed by Mexico and Argentina. According to the Coherent Market Insights, Brazil has the largest child population in the region and recorded a continuous increase in crude birth rate since 2009. The major factors propelling the growth of baby food market in Latin America, include the steadily developing primary and secondary health care applied to marginal urban and rural population. This in turn, reducing the infant mortality in Latin America and thereby contributing in the overall growth of this market in the region. According to the National Center for Biotechnology Information (NCBI), the numbers of deaths under age five years declined fastest in Latin America between 2000 and 2015.

Baby food is a partial or total substitute for breast milk for infants and toddlers of under two years. It contains adequate amount of iron and proteins to ensure the proper growth and initial body development of a baby. Furthermore, baby food market is broadly classified as infant formula and baby food. Infant formula is a replacement of mother’s milk, whereas baby foods include soft minced and mashed fruits, cereals and vegetables etc.

Increasing number of women in the workforce and fast paced lifestyle is largely supporting the usage of packaged baby food worldwide. According to the World Bank, in 2015, approximately 39.42% women joined the labor force and this number is anticipated to witness consistent rise in the near future. In addition to this, the continuously growing concerns towards the requirement of adequate nutrition and overall development of a baby in their early stage growth is further aiding to the market growth of baby food at high pace.

Latin America is expected to project the fastest growth in the global baby food market during the forecast period, owing to the increasing awareness among people regarding the health benefits of feeding baby food to infants and babies. Furthermore, reduced infant mortality rate in Latin America, is also expected to propel the demand for baby food.