Biopsy is a medical procedure involving extraction of sample cells/tissues from a tumor for examination and diagnosis of malignancy. The procedure is performed in two ways- needle-based minimally invasive procedures and open surgical procedures.

Increasing incidence of cancer is expected to propel growth of the global biopsy devices market over the forecast period. For instance, according to the American Cancer Society, in 2019, there will be an estimated 1,762,450 new cancer cases diagnosed and 606,880 cancer deaths in the U.S.

North America held dominant position in the global biopsy devices market in 2019, accounting for 38.8% share in terms of value, followed by Europe and Asia Pacific, respectively. 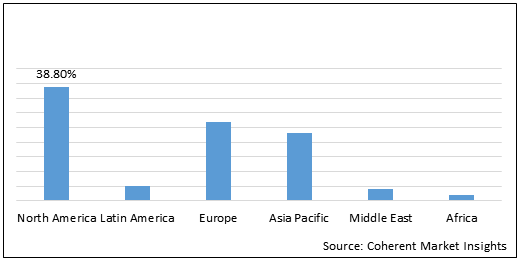 Moreover, introduction of taxes such as the Medical Device Excise Tax (MDET) of 2.3% in the U.S. is also expected to limit the market growth.

Moreover, adoption of AI in biopsy is also expected to aid in growth of the market. For instance, in October 2018, Freenome, an AI genomics company based in the U.S., is focused on developing blood tests to detect the body’s early-warning signs of cancer, using AI. In October 2018, the company presented early data in R&D for using machine learning to detect colorectal cancer at its earliest stages. 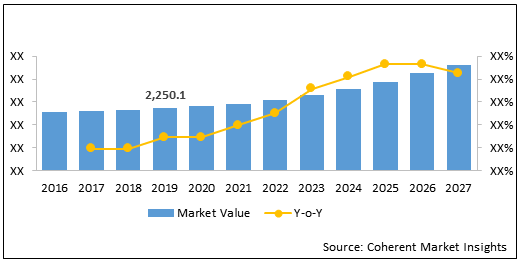 Major players in the global biopsy devices market are focused on approval and launch of new devices in order to expand their product portfolio. For instance, in December 2019, Medtronic plc received the U.S. Food and Drug Administration clearance for its Stealth Autoguide system, for biopsy procedures, stereoelectroencephalography (sEEG) depth electrode placement, and for the positioning of the Visualase bone anchor, which is used for catheter placement.

Major players in the market are also focused on adopting M&A strategies in order to expand their product portfolio. For instance, in January 2019, IZI Medical Products acquired a set of biopsy and breast localization needles from Cook Medical for an undisclosed amount.

Major players in the global biopsy devices market are focused on approval and launch of new devices in order to expand their product portfolio. For instance, in January 2020, Zomedica Pharmaceuticals Corp., a veterinary diagnostic and pharmaceutical company, announced completing the development and manufacturing of its reference lab cancer liquid biopsy platform for canine cancers.

Major players in the market are focused on approval and launch of new devices in order to expand their product portfolio. For instance, in February 2020, QIAGEN N.V launched its FFPE and liquid biopsy PIK3CA diagnostics in Europe as an aid in identifying breast cancer patients with a phosphatidyl 3-kinase catalytic subunit alpha (PIK3CA) mutation

A biopsy is a sample of tissue taken from the body for in-depth analysis of the sample to reach an effective diagnosis of a condition, wherein conventional diagnostic methods such as x-rays and body scans do not provide any conclusive evidence. The procedure is performed in two ways- needle-based minimally invasive procedures and open surgical procedures performed for examination and diagnosis of malignancy. Increasing incidence of cancer, increasing product approvals, increasing awareness of cancer in developing economies along with adoption of expansion strategies from leading players to further strengthen their market positioning is expected to assist the market growth during the forecasted period.

Biopsy Guidance Systems segment held the major market share in 2019 owing to an technological advancement in product design and increasing product approvals is expected to propel growth of the market.

Which are the key factors driving the growth of the Global Biopsy Devices market?

Major factors hampering the growth of the Global Biopsy Devices market during the forecast period constitutes of lack of reimbursement.

Which region held the largest market share in the Global Biopsy Devices market?