Camera modules are electronic devices, which convert an optical signal into a digital electronic signal through a lens with the help of an image sensor and display captured images on the display device. In other words, it is a component that provides video recording function, gesture recognition, and still image function to a digital image. The camera modules are typically used in packaging.

In November 2021, Google Pixel 6a will be launched with Pixel 6-Inspired Camera Module. 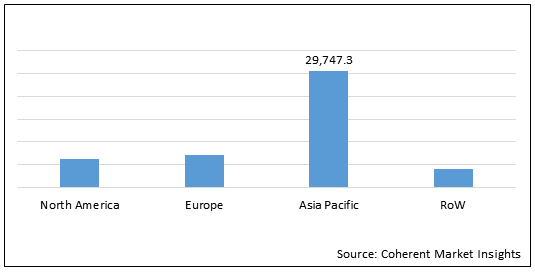 Asia Pacific held dominant position in the global camera module market in 2020, accounting for 59.3% share in terms of volume, followed by Europe and North America, respectively.

Robust growth of smartphone and tablet market is expected to drive growth of the global camera module market during the forecast period. Camera modules are mainly used in electronic devices such as smartphones, tablets, digital cameras, webcams, and surveillance systems. However, smartphone and tablet PCs have witnessed massive demand in the recent past. Since the inception of camera technology, camera modules ranging from 1 megapixel to about 13 megapixels have been developed. High-resolution cameras installed in smartphones play a key role in the sales of smartphones. Currently, the camera is one of the most important features required for selling smartphones and tablet PCs. Consumers inquire about several features before buying a mobile phone or tablet PC, and the camera resolution is one of them.

Constant enhancements in camera resolutions are expected to propel the global camera module market growth over the forecast period. Camera modules are typically used in a large number of imaging devices across various application segments including consumer electronics, industrial, tablet PC, medical sector, and smartphone. The market for camera modules was majorly dominated by 2-megapixel cameras until 2011. There was a sudden shift towards high-resolution cameras and camera modules with resolutions up to 5 megapixels for lower-end mobile phones and 8 megapixels for premium smartphones in 2012. The market is expected to see a further change, with most of the lower end camera phones having 5 megapixels and premium smartphones having 8 and higher megapixels in 2013.

Growing application in automotive and defense sector can provide lucrative growth opportunities. Automotive sector is one of the rapidly growing markets for camera modules. The main factor contributing to this growth is the enforcement of government regulations in different regions. Driver safety has been a major concern for the government. Government authorities and car manufacturers have taken proactive initiatives to provide driver safety and reduce incidences of on-road accidents. Premium car manufacturers are launching their cars with rearview camera features. For instance, Audi range cars A6 and A8 that are equipped with rearview cameras for better vision.

Sharing images on social networking platforms has become a new trend wherein people share their activities on social networking websites. Social network sites such as Google Plus, Twitter, Facebook, Flickr, Instagram, and WhatsApp are popular among users wherein they share pictures and share through their mobile phones. As a result of this, consumers are demanding mobile cameras having good resolution and advanced features such as panorama mode, macro mode, effects, night vision mode, blur motion mode, and sports mode. Moreover, this, trend is expected to continue during the forecast period.

Capacity limitations of camera modules are expected to restrain growth of the global camera module market during the forecast period. A major challenge in the market is to maintain the demand and supply of camera modules to mobile phone vendors. Key players in the market such as Samsung, Apple, and Nokia are producing millions of units of smartphones every year. Due to the fragmented nature of the market, there is absence of any dominant supplier. However, there is an absence of any dominant supplier, owing to the fragmented nature of the market. Furthermore, a camera module is manufactured by the addition of more than ten components such as lens, actuators, VCM, and image sensors. These components are sourced from third parties in most of the cases.

High cost of multi-camera systems deployment in vehicles is expected to hinder the global camera module market growth over the forecast period. Camera modules that are deployed in vehicles are of high-quality. These cameras are extremely expensive and hence only high-cost cars are equipped with such comers.

A camera module is a tiny electronic device integrated with an imaging camera, microprocessor, digital control circuit, and possibly an interface such as CSI, Ethernet, or even plain analog low voltage differential signaling. It is an integral part of a digital camera system and is usually built into the camera itself. The size and power consumption of a camera depends on the camera module. It is often used as a stand-alone unit or can be included in a digital camera, which is then mounted on a computer. There are basically two types of camera modules namely stereomatics and infrared. A Stereomatics camera module consists of an imaging microprocessor and lens that drive an electrical motor. A digital control circuit drives the actuator, which is controlled by the microprocessor. An additional accessory, called a monitor, is used to view the captured images on a monitor. This type of camera has high resolution however, it is somewhat difficult to program and troubleshoot if needed.

Increase use of security cameras in households and commercial spaces is expected to boost the global camera module market growth over the forecast period. The majority of commercial spaces have started adopting closed-circuit television (CCTV) security systems to monitor the premises and prevent intrusion. Commercial establishes such as banks, hospitals, shopping malls, and more have increasingly adopted security cameras in the recent past. Similarly, many people have started adopting these camera modules in households to monitor private property.

Furthermore, rapid growth of advanced driver assistance systems in vehicles is expected to accelerate growth of the global camera module market in the near future.

What is the projected market size and CAGR of the market?

Robust growth of smartphone and tablet market is expected to drive growth of the market during the forecast period.

What are key restraining factors in the market?

Capacity limitations of camera modules are expected to restrain growth of the market during the forecast period.

What are significant opportunities in the market?

Rising trend of adding secondary camera in smartphones and tablet PCs is one of the emerging trends in the market.

What are key companies operating in the market?