Catamarans Market - by Product Type (Sailing Catamarans and Engine-powered catamarans), by Application (Cruising and Sporting), and by Regions - Global Industry Insights, and Forecast till 2023

Press Release: Global Catamarans Market to Surpass US$ 1.54 Billion by 2023

Global Catamarans Market to Surpass US$ 1.54 Billion by 2023

Catamarans are multi-hulled boats and are considered as luxury cruising yachts. Catamarans were used for racing or sports purposes, however, over the past few years, these have been manufactured for cruising as well. Along with sports and cruising, catamarans are also used for various other applications such as passenger transport and military operations. Catamarans offer multiple advantages such as enhanced stability, speed, and maneuverability over other marine alternatives such as boats, yachts, and monohulls. This has led to high adoption of catamarans for various applications including sports and recreational purposes. The average speed of catamarans is 300 nautical miles (560 km) per day, which can be as much as 400 nautical miles for sporting events.

Catamarans provide ample space, improved stability, due to support from two hulls, high speed, level sailing due to lack of heeling, and safety. This are among the major benefits that has in turn, led to growth of the market over the forecast period (2018–2023). 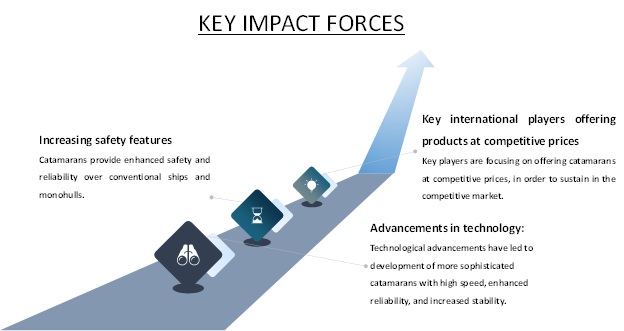 Technological advancements in cruises such as enhanced speed and safety features coupled with increased stability have led to increased adoption of catamarans for various application. It is increasingly being used for luxury and leisure application, however, it is also gaining popularity in military operations and transportation as well. Advancements in terms of reliability and enhanced speed and stability such as powerful engines and durable body of the hulls has aided catamarans to scale large distance in shorter time periods and offer enhanced comfort and safety. The racing events are gaining traction and are demanding advanced features in catamarans for enhanced speed and durability along with space and luxury features.

Catamaran or multihulls are popular for cruising, relaxing, and has features to provide maximum comfort, see over cabin tops, wide space, and bridge deck clearance and several other performance based advantages in relation to power and speed catamaran. Cruising catamarans such as Cat 38 offered by Maine Cat Catamaran, Saona 47 offered by Fountaine Pajot, and HH-55 offered by HH catamarans are all high performance, comfortable, and easy-to-handle cruising catamarans. Also, events such as World Cruising Events organized by Atlantic Rally, is also another factor expected to aid in growth of the market over the forecast period.

Catamarans offer enhanced speed, however, reduces load per unit of cost. Along with speed, catamarans draw much less water than monohulls, which is as less as 3 feet. This allows avoidance of shoals and ease beaching the boat to work on the bottom. However, the added beam of a catamaran may cause problems for docking or hauling out by a boatyard. Moreover, catamarans have added expense for having two engines and two rudders, which is are factors negatively affecting growth of the market. Catamaran are especially popular for sports in North America, Europe, and certain parts of Asia Pacific region such as Australia. A variety of sailing catamarans and foiling catamarans have been used in Olympic sailing competitions.

North America was the dominant region in the global catamaran market, and is expected to retain its dominance over the forecast period. According to Coherent Market Insights’ analysis, North America is expected to exhibit a CAGR of 4.2% to reach US$ 557.8 Mn by 2023 from US$ 417.4 million in 2016.

Key players in the market are focusing on launching new products, in order to enhance its market share. For instance, Aquila 36 is an outboard powered sport catamaran offered by Multihull Central, which was launched in 2017.

The study includes a detailed analysis of the global catamarans market with succinct briefings about its types and applications along with profiles of the leading companies mapped in the report. Catamarans are used for luxury cruising experience and are also being utilized for multiple transportation and military operations. The report gives a detailed information about product type and applications of the catamarans. The market is expected to have a CAGR of 4.6% during the forecast period (2018-2023) starting from US$ 1.12 Billion in 2016 to US$ 1.54 Billion by 2023.

The market for catamarans is expected to witness growth over the forecast, owing to increasing cruising and racing events organized across regions such as racing championships in Auckland, New Zealand. Catamarans, due to the design and structure, which includes 2 hulls; aids in increasing stability, reliability than mono-hull boats and gain optimum speed of 40 nautical miles, with more space and boarding capacity. These features has led to use of catamarans for cargo carriers and in military operations across the marine. High cost of catamarans is impeding the market growth to some extent as it is affordable by only few people. Cost is the major drawback for catamarans, as the cost ranges between a few hundred thousand dollars to over several million dollars. It is expected to remain as a luxury product. People in countries such as Japan and India have low disposable income and they often rely on chartering catamarans, for tourist destinations such as Thailand and Malaysia, where chartering options are available.

What are the growth estimates for catamarans market till 2023?

The global catamarans market is estimated to surpass US$ 1.54 Billion by 2023.

Which are the prominent catamarans market players across the globe?

Which segment based on product type, accounted for the highest demand in the catamarans market?

Among product type, engine powered catamarans segment was the dominant segment in the catamarans market in 2016.

What are the key factors driving growth of the catamarans market?

What is the Compound Annual Growth Rate (CAGR) of the catamarans market for next 8 years?

The global catamarans market is estimated to exhibit a CAGR of 4.6% over the forecast period.

Which region is dominating the catamarans market growth?

Among regions, North Americais expected to hold dominant position in the global catamarans market over the forecast period.