Press Release: Global Combination Treatment in Aesthetics Market to Surpass US$ 4 Billion by 2026

Increasing incidences of the facial problems (wrinkles, acne, scar, sun damaged skin, stretch marks, and hyperpigmentation) is resulting in to wide utilization of non-invasive as well as minimally invasive cosmetic procedures, which in turn is expected to drive growth of the combination therapies in aesthetics market. Dermatologist are applying the combination of treatment to improve the final outcome with rapid penetration of these procedures.

According to the report by International Society of Aesthetic Plastic Surgery titled Global Aesthetic Survey Results published in 2015, around 20 million cosmetic procedures were conducted worldwide, in 2014. This includes 9,645,395 surgical procedures and 10,591,506 non-surgical procedures. According the same source, over 55% of these cosmetic procedures were carried out in 10 countries such as the U.S., Brazil, Japan, Italy, Mexico, Russia, India, Turkey, Germany, and France.

According to Plastic Surgery Statistics Report, 2017, by American Society for Plastic Surgeons, in 2017, 4% increase was observed in patient’s base, which underwent multiple therapies for same cosmetic treatment. Moreover, over 14 million minimally invasive cosmetic procedures were performed that include, botulinum toxin type- A, soft tissue fillers, laser hair removal, laser skin resurfacing, microdermabrasion, and others. Preference for combination treatment is expected to improve with enormous adoption of minimally invasive therapies, which in turn is expected to boost the combination treatment in aesthetics market growth.

However, lack of reimbursement for cosmetic procedures by insurance companies is expected to limit the utilization of the procedure, in turn restraining growth of the market. According to the American Society of Plastic Surgeons (ASPS) in 2017, each session of the non-ablative laser treatments cost around US$ 1,031 per session, while ablative treatments cost around US$ 2,330 per session. Furthermore, no standard guidelines are available for implementing combination treatment in aesthetic, which may lead to slower adoption of this approach. 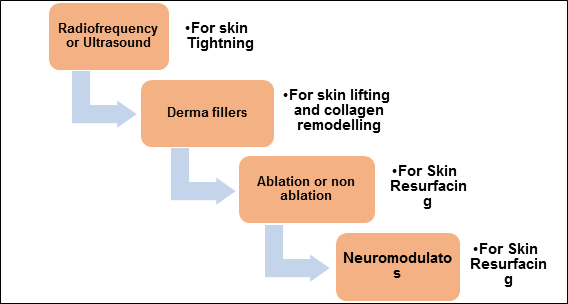 Need for enhancing facial features would be increasing with increase in aging population, as per analysis by Coherent Market Insights. According to world population prospects report published in 2017, global population is moving toward higher age group. In 2017, an around 962 million people were aged 60 or over, worldwide. This comprised 13% of the global population and is estimated to reach 1.3 billion by 2025 with a growing rate of around 3%, annually. Individual with aging faces skin problems such as decreasing skin fat, wrinkles, hyperpigmentation and other skin related problems. Therefore, combination treatments would be ideal choice in order to enhance facial features as well as to delay facial aging.

Various manufacturers are launching derma fillers-based, neuromodulators-based and device- based new products thereby helping in high adoption of multiple platforms for aesthetics treatment especially in skin health sector. This in turn is expected to propel growth of the combination treatments in aesthetics market. For instance, in January 2018, Korea-based Lutronic launched a new laser device— Lase MD— for skin rejuvenation. It is 1,927 nm Thulium laser, which is designed to provide customized skin resurfacing to patients of all ages and skin-type, through fractionated treatments with minimal downtime. The laser with device creates micro-channels with minimal disruption to the outermost layer of the skin, stratum cornium, and leaves the tissues untouched for better permeability and fast healing.

Combination treatment in aesthetic market is emerging as a preferred choice of therapy due to various benefits it offers. It is evident in cosmetic procedure that no single device, technology, filler, or neuromodulator can achieve all the desired results in treating various skin related problems such as scar, hyperpigmentation, and wrinkles. Moreover, complex cosmetic procedures such as tattoo removal and hair removal do not show visible changes when single treatment is applied. Therefore multiple approaches in succession is preferred in these procedures. Furthermore,  combination therapies also reduces number of clinic visits.

Combination treatment in aesthetic market is expected to witness positive growth over the forecast period, owing to increasing preference for skin-related minimally-invasive therapies around the world. According to the report by International Society of Aesthetic Plastic Surgery titled Global Aesthetic Survey Results, 2017, around 14% increase in skin rejuvenation procedures was reported worldwide in 2016. According to same source, around 2,545,922 facial rejuvenation surgeries were conducted worldwide in 2016. According to the American Society for Aesthetic Plastic Surgery’s national data bank, the U.S. spent US$ 2,332,965,407 on skin rejuvenation procedures, in 2015.

Furthermore, high prevalence of skin-related disorders and increase geriatric population is expected to propel demand for the combination treatment in aesthetic market. According to a study published in the British Journal of Dermatology, in 2015, around 9.4% of the global population was estimated to be affected by acne. Furthermore, Photon-based therapy and lased-based therapy are emerging as new trend in acne scars treatment, which is expected to contribute to the market growth over the forecast period.