Stents are medical devices intended for the treatment of blocked vascular paths. The procedure used to reduce blockages is known as percutaneous transluminal coronary angioplasty (PTCA). Stents used for arterial blockage are called coronary stents or heart stents. These stents are also used to prevent re-narrowing of the arteries. Coronary stents can be of three types; bare metal stents, drug eluting stents, and bioabsorbable stents. Although, bare metal stents dramatically improve angiographic and clinical outcomes of patients, the rate of restenosis is 20–30%. This is a major factor limiting the usage of bare metal stents and development of next generation of drug eluting stents. 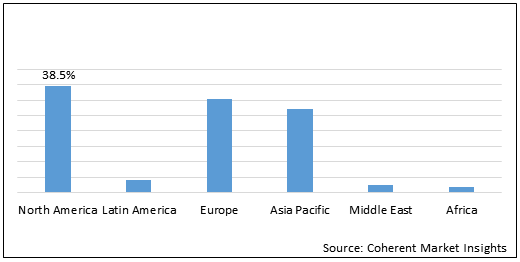 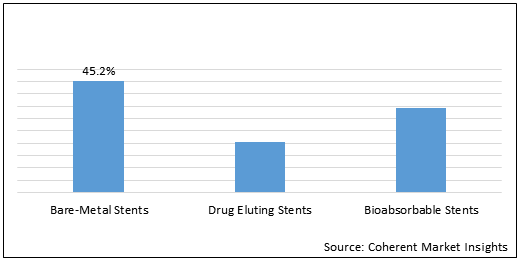 For instance, in February 2019, Medtronic PLC received an approval from the U.S. Food and Drug Administration for its Resolute Drug-Eluting Stent (DES) platform (including the Resolute Onyx and Resolute Integrity DES) for treatment of patients with coronary artery disease who have de novo chronic total occlusion (CTO), a complex vessel condition of complete blockage of a coronary artery. CTO is considered more difficult to treat with percutaneous coronary intervention (PCI) due to a greater risk of complications.

In September 2019, OrbusNeich Medical K.K., a Japan-based company, received approval for its COMBO Plus Coronary Stent from the Japan Ministry of Health, Labor, and Welfare (MHLW). The COMBO Plus Coronary Stent is the first drug-eluting stent [DES] to combine the proprietary endothelial progenitor cell [EPC] capture technology with an abluminal sirolimus drug elution delivered from a biodegradable matrix polymer that achieves full and complete dissipation in 90 days.

Moreover, in May 2019, Medtronic Plc launched the Telescope Guide Extension Catheter. The extension catheters help to deliver coronary stents, balloons and other interventional devices during angioplasty procedures that help to restore blood flow through the coronary and peripheral arteries.

Since the COVID-19 virus outbreak in December 2019, the disease has spread to over 100 countries around the globe with the World Health Organization declaring it a public health emergency. According to the World Health Organization’s report, the manifestation of COVID-19 has resulted in more than 20.6 million infected individuals worldwide as of 13 August 13, 2020. Furthermore, the global COVID-19 pandemic has led to a sudden pause in manufacturing activities across the globe, thereby affecting demand for coronary stents, as well as production and processing of coronary stents.

Factors such as risky stent implantation and complications associated with implantation of stents is expected to negatively affect growth of the market. For instance, stents implantation is prone to stents displacement and re-narrowing of the arteries. Re-blockages are addressed by administering blood-thinning drugs, which is leading to high adoption of drug eluting coronary stents.

Coronary stents are small interventional devices used for opening blocked arteries and preventing re-narrowing of arteries. The global coronary stents market report provide a valuable tool for evaluation of coronary stents in the current scenario and trends during the forecast period (2020-2027). The report delivers in depth analysis of factors driving as well as restraining the market growth and also enlightens further market opportunity for manufacturers. The report also covers key developments and company strategies to expand the market share.

Product launches coupled with increasing geographical expansion of drug-eluting coronary stents product portfolio is propelling growth of the coronary stents market over the forecast period. For instance, in May 2018, Abbott received the U.S. FDA approval for XIENCE Sierra, the new generation of everolimus-eluting coronary stent. The XIENCE received approval from Japan’s regulatory body in April 2018, and CE mark from European regulatory bodies in 2017. Furthermore, companies are also evaluating and launching products using novel material, such as metal like cobalt chromium and fully biodegradable stents. For instance, in 2017, Biotronik received U.S. Food and Drug Administration approval for PRO-Kinetic energy cobalt chromium-based bare metal coronary stent system to treat coronary artery blockage. However, the coronary stents market growth is subject to stringent regulatory approval policies for interventional devices and medical complications such as restenosis and thrombosis, which is expected to restrain the market growth.

What are the major factors driving the global coronary stents market growth?

The increasing prevalence of coronary heart disease, launch and approval of novel products, and collaborations and acquisitions by key players is expected to drive the market growth during the forecast period.

Which is the leading material segment in the coronary stents market?

Polymeric material segment is expected to hold the major market share, owing to an increasing number of product approvals and launches during the forecast period.

Which region holds the largest market share in the coronary stents market?

Major factors hampering growth of the market are risky stent implantation and complications associated with implantation of stents.

which are the major players operating in the market?