Dental implants are witnessing steady growth in demand, owing to rise in geriatric population and higher inclination of the populace towards maintaining aesthetic looks. Post the invention of dental implants in1954, the dental implants market revenue has grown manifold and is still highly lucrative for market players. Demand for dental implants is steadily increasing as the procedure offers a perfect solution for artificial teeth surgically imbibed in upper and lower jawbone.

Cosmetic and dental issues arise as a result of aging. According to National Institute of Dental and Craniofacial Research, geriatric population (aged 65 years and above) have an average of 18.9 remaining teeth, in turn creating a highly lucrative market for dental implants. Technological advancements coupled with high demand for dental implant procedure has resulted in a highly lucrative market characterized by high profit margin for players across the value chain. Advancements in technology allow for implants in people without a proper structured or weak jawbone. In 2015, dental implants accounted for over 15% share of global dental device market revenue.

Dental implants market witnessed a very sluggish growth in terms of innovation post-1957. However, post 2000, many new companies emerged in the market leading to fierce competition among players in a highly fragmented industry. As a result, companies are emphasizing on product innovation to sustain and expand their global market presence. For instance, in 2016, Israel–based Magdent launched a miniature electronic device (MED) capable of accelerating bone growth three times faster than normal. The product is yet to receive approval from the U.S. FDA. 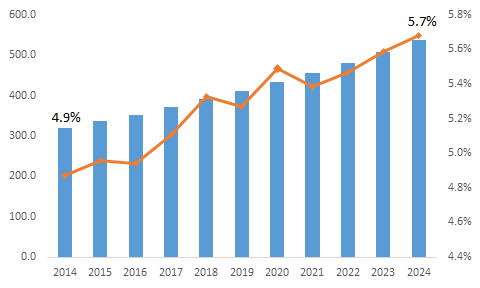 To have a snippet of the report, request Report Sample

Zirconia, a corrosion free metal, is one of the newly introduced concepts in dental implants market and the zirconia dental implants segment is expected to register highest CAGR over the forecast period.

Asia Pacific, followed by Latin America is expected to register fastest CAGR between 2016 and 2024. Asia Pacific market growth is primarily driven by increasing number of dental implants procedure in China, India, and Japan. India dental implants market is expected to register highest regional CAGR over the forecast period. There are over 5,000 dental laboratories with around 300 dental institutes and 200,000 dentists in India. Increasing growing consumer base along with better economic growth is expected to create lucrative market opportunity for industry players. In 2015, India imported over 77% of dental implant products from Germany, U.S., Japan, and Italy. The ‘Make in India’ campaign initiated by the Indian government is expected to bolster number of manufacturing facilities across various healthcare verticals including dental manufacturing sites in the country.

Dental implants are implants in the jaw, placed below the gum line, providing a base for planting artificial teeth or bridge. Dental implants market has witnessed drastic rise in the last few years. A number of socioeconomic and technological factors have contributed to overall growth of the industry. Europe and North America account for 65.9% of global dental implants market revenue in 2016. However, market dynamics are expected to witness a major shift, with Asia Pacific and Latin America emerging as the fastest growing markets for dental implant over the forecast period (2016–2024). This is primarily attributed to aging baby boomers population with high spending power. Lately, the industry is witnessing change in market dynamics post-economic recession of 2008. The industry that was once fragmented is slowly shifting towards consolidation. One such example is the acquisition of Astra by DENTSPLY in 2011.

With changing market dynamics, companies are emphasizing on product innovation and strengthening of distribution channel to sustain and expand their business reach worldwide. Various macroeconomic factors such as increased geriatric population, growing focus on aesthetics, rise in out-of-pocket spending, and establishment of quality healthcare institutions are expected to bolster sales of dental implant devices worldwide. On an average, over 20% of population in EU is aged over 65 years. Moreover, EU spends nearly 9% of its GDP on healthcare. Increasing consolidation, technological advancement, and company laying emphasis on strengthening distribution channels are some of the key dental implants market trends.