Press Release: Electric Scooters Market Is Expected to Witness CAGR of 4.0% by 2027

Electric Scooters Market Is Expected to Witness CAGR of 4.0% by 2027

Electric scooters or motorcycles are plug-in electric vehicles, evolved from traditional scooters that use electric power or a combination of electric power and power generated by internal combustion engine to propel the vehicle. Electric scooters are popular for their fuel-efficient application and less greenhouse gas emission. They have been deemed as the future of conventional motorcycles. Electric scooters are two- or three-wheeled and are also lightweight, compact, easy to maneuver, and easy to handle. Over the years, electric scooters have evolved a lot with numerous types of models available in the market. There are self-balancing scooters, folding scooters, and three-wheeled scooters. However, standard scooters are still the most preferred product among consumers.

Conventional motorcycles that run on gasoline or diesel are responsible for air pollution. They emit hazardous compounds including carbon monoxide, nitrogen oxide, carbon dioxide, unburnt benzene, particulate matter, etc. that severely pollute air and are responsible for life-threatening diseases. According to the U.S. Department of Energy Office of Science and the U.S. Environmental Protection, on an average, a gasoline passenger car releases 320 grams of harmful chemicals including carbon dioxide per traveled kilometer or equivalent to over 4,750 kilograms of harmful pollutants per year. On the contrary, electric scooters are less polluting and far more efficient than conventional scooters. Moreover, an individual electric scooter releases 250 grams of pollutants per kilometer traveled, which in turn, is expected to drive the market growth in the near future.

The main source of energy in electric scooters is rechargeable batteries where electricity is stored. These batteries are made of Lithium-ion, Lead, or NiMH that can be recharged by transmission electricity. Moreover, the transportation sector is investing significantly in renewable energy vehicles, due to depleted sources of fossil fuels. Fuel prices around the world are increasing exponentially, which has compelled consumers to shift to electric scooters. This, in turn, is expected to boost the market growth over the forecast period. 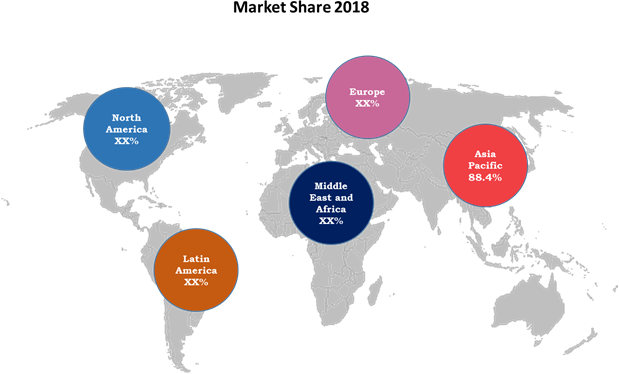 Although electric scooters offer numerous advantages over conventional scooters, major factor hindering their adoption is inadequate charging station infrastructure. Developed countries such as the U.S., Canada, and the U.K. have taken initiatives to install ample public charging stations at supermarkets, restaurants, malls, cinema theaters, airports, etc. However, emerging countries in Asia Pacific still do not have robust public charging stations, which in turn, is hampering the adoption of electric scooters. Creating adequate electric charging stations requires substantial investment and proactive initiatives from the government, which in turn, is expected to restrain the market growth over the forecast period.

Currently, there are three types of electric scooters in use namely hybrid electric, plug-in electric, and pure electric. Although these scooters have been labeled as green vehicles, the charging stations that recharge batteries often run fossil fuels such as coal or natural gas. Thus, development of alternative technologies to charge these batteries such as solar-powered charging, wind-powered charging stations or fuel cells can offer better prospects in the market. Moreover, fuel cell technology has a bright future among others where it can be charged in 5-10 minutes only, which faster than electric or hybrid vehicles.

The governments of many countries are offering subsidies and incentives for electric vehicle buyers, in order to endorse green vehicles and curb carbon emission. The countries such as Japan, China, Canada, Germany, and the U.S. have started offering lucrative incentives, subsidies, and tax benefits for electric scooters consumers, in order to boost their sales. Moreover, this model has been followed in Norway, France, and Sweden and has proved to be a success. This, in turn, is expected to offer significant opportunities for market players.

Electric scooters are fairly popular in developed regions such as North America and Europe. However, their adoption is low in Latin America, Africa, Eastern Europe, and Middle East. This is majorly due to high supplies of fossil fuels and other substitutes such as ethanol or methanol blend-mixed with petrol, which has decreased the sales of electric sales in these regions.

Micro-mobility is one of the latest trends in the global transportation sector relating to the environmental hazards due to the increase in usage of heavy automotive by consumers. Increase in carbon emissions is one of the restraining factor that is expected to deteriorate the demand for electric vehicles in the market. Several factors such as low fuel cost, reduction in noise pollution and cost-effectiveness of electric scooters as compared to conventional scooters are the factors boosting the demand for electric scooters globally. Moreover, there is increase in for electric vehicles due to the initiatives taken by several governments to introduce eco-friendly and energy efficient electric vehicles which will create a huge impact on environment.

The global electric scooters market is driven by presence of huge number of OEMs (Original Equipment Manufacturers) that are innovating their product portfolio. Moreover, decrease in cost of batteries is expected to create incremental growth opportunities for the electric scooters manufacturers globally.  Rising demand for fuel-efficient vehicles owing to increasing greenhouse gas and carbon emissions is one of the major factors driving the growth of electric scooters market. Also, growing investments by several governments in order to develop advanced charging infrastructure and R&D incentives is expected to create opportunities for original equipment manufacturers in order to expand their market presence and market revenue.

Electric aircraft is a type of aircraft, which is powered by electric motors. Electricity can be supplied th...

Market Overview A golf cart or golf car is a small veh...

Market Overview A bicycle or bike is a human-powered...