Emulsifiers are used as a stabilizing agent across cosmetic, food &beverage, pharmaceutical, and personal care industry where it helps to stabilize the two or immiscible liquid. In the food industry, it is also used to preserve the sensitive feature of food such as tastes, texture, and flavor. Moreover, it is also used in the agriculture industry in the manufacturing of agrochemicals. In the pharmaceutical industry, it finds application across tablets, creams &gels, and syrups. An emulsifier is mainly used in the mixture of liquid where one solution is water and the other is oil. It helps to keep the solution blended by preventing them from getting separated.

Growing demand for lactic esters of fatty acids across the personal care industry due to its multi-functional property is expected to augment the market growth of emulsifiers. It is used as a humectant and emulsifying agent in the manufacturing of personal care products such as lotions, creams, bath products, facial cleansers. Furthermore, it is also used as a gellant in the deodorants and antiperspirants products. 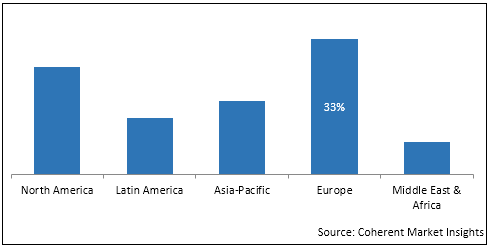 Growth in the processed food industry is expected to expand the scope for emulsifier due to increasing the development of variety in food products is expected to offer immense opportunity. Rising demand for the ready-to-eat product, snacks, desserts, and infant nutrition products is projected to propel the market growth of emulsifiers over the forecast period. Moreover, the growing demand for packaged and convenience food is also expected to accelerate market growth. 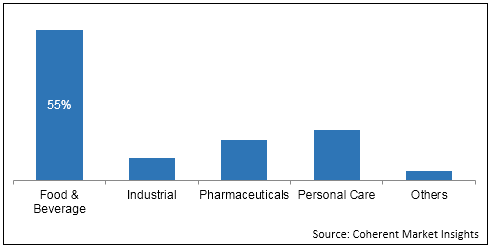 On the basis of application, food & beverage dominated the global emulsifiers market in 2019 with around 55% of market share in terms of revenue, followed by personal care and pharmaceuticals, respectively.

Emulsifiers are widely used as additives and have extensive application ranging from bakery to meat processing. Moreover, rapid industrialization in the food & beverage sector in emerging economies is driving factor for the rise in demand of emulsifiers.

The global emulsifiers market has witnessed significant growth in recent past years, owing to the rise in its applications in cosmetics industry which is used for mixing water with oils. In addition to this, shifting consumer preferences over the texture, quality, nutritional value and taste of food products has led to provide lucrative growth to the global emulsifiers market over the forecast period.

Major players in the global emulsifiers market are increasing their investment on innovative product launchings, research & development and marketing & promotional activities to capitalize on emerging trends various end-user industries such as food & beverages and cosmetics.  This scenario is expected to fuel the market during the forecast period.

What are the Major growth driving factors for the global emulsifiers market during the forecast period?

Rising demand for emulsifiers from the pharmaceutical industry and growing demand for lactic esters of fatty acids across the personal care industry due to its multi-functional property is fuelling the growth of the global emulsifiers market in the region.

What are the trends in the Global Emulsifiers market?

Growing demand for emulsifiers from the agriculture industry in the preparation of agrochemical products and rising use of emulsifiers in the manufacturing of plastic during the polymerization are expected to favour market growth over the forecast period.

What are the key factors hampering the growth of the global emulsifiers market?

Use of emulsifiers in personal care products tends to be expensive and acts as a challenge during the formulation of products is expected to hamper the growth the market during the forecast period.

The global emulsifiers market was estimated to be valued around US$ 4.0 Billion in terms of revenue in 2019.

Dolomite is a type of limestone, a type of sedimentary roc...

Azelaic acid is an organic compound with molecular formula...

Elemental fluorine is a gas that is highly toxic and react...