Epinephrine also called as adrenaline is a hormone and neurotransmitter produced by the adrenal glands. Epinephrine helps to reverse the effects of anaphylaxis and it is used as the first line of treatment. Auto-injectors are commonly used by individuals suffering from anaphylaxis, as it can be administered by non- medical person. 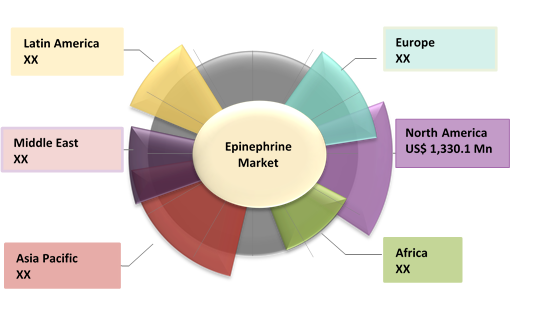 Launch of cost effective generic epinephrine products by the manufacturers is majorly attributed to the high price of EpiPen developed by Mylan NV. The price hike was not accepted by the public, as the drug price increased to more than 400% over a decade.

Furthermore, support of regulatory agencies is expected to streamline the approval of generic copies of drugs, thus allowing the launch of drug substitutes without affecting the clinical effect or safety profile. For instance, in October 2017, the commissioner of FDA announced plans to accelerate development of generic versions that combine a drug and a device. In November 2017, the FDA issued guidance for developing generic copies of complex medicines such as EpiPen to reach the market, without affecting safety and efficacy, thereby providing a lower-cost option and to meet the demand of drug shortages.

Also, insurance companies and state Medicaid programs have stopped covering branded products such as EpiPens, thereby favoring the adoption for alternative epinephrine auto-injectors, as the high cost of the products are directly shifted onto the payers. For instance, in 2017, the private insurer Cigna Corp. changed the policies for providing easy access of generic auto-injectors to patients, as the insurer will cover Mylan's US$ 300 generic version of the EpiPen, which is cost-effective alternative as compared to the branded drug.

However, unavailability of approved drugs due to increasing number of product recalls by various developers is a factor hindering growth of the global epinephrine market. For instance, in 2015, Sanofi US voluntarily recalled Auvi-Q (epinephrine injection, USP) on the market including both 0.15 mg and 0.3 mg strengths for hospitals, retailers and consumers, as the products had inaccurate dosage delivery, thus included failure to provide intended drug dose.

Epinephrine is available in different doses and concentrations for delivery by different routes and for different indications, including respiratory disorders. According to the World Health Organization (WHO), 2018, Chronic Respiratory Diseases (CRDs) affect more than 1 billion people worldwide and asthma is a large contributor, affecting children, adults, and elderly population often throughout their entire lives. The WHO in 2017, stated that over 300 million patients suffered from asthma in 2013, and are expected to increase to over 400 million by 2025 globally.

North America dominates the global epinephrine market, owing to increasing number of patients suffering from respiratory disease such as asthma. For instance, according to the Asthma and Allergy Foundation of America, 2014, anaphylaxis is a severe life-threatening allergic reactions occurring at least 1 in every 50 people in the U.S., and its rate is as high as 1 in every 20 people.

Also, various players in the region are involved in developing innovative products, which in turn is expected to augment market growth. For instance, in July 2016, MannKind Corporation initiated developmental process for single-use disposable epinephrine inhaler, thereby providing an affordable and needle-free alternative.

For instance, in August 2018, Teva Pharmaceuticals received the Food and Drug Administration (FDA) approval for first generic versions of EpiPen and EpiPen Jr, for the emergency treatment of allergic reactions, including life-threatening allergies (anaphylaxis), in adults and pediatric patients weighing more than 33 pounds.

Epinephrine injection is used along with emergency medical treatment to treat life-threatening allergic reactions caused by insect bites, foods, medications, and other causes. The epinephrine auto-injectors are disposable, prefilled automatic injection devices, which are intended for self-administration of epinephrine solution in an emergency for on-the-spot treatment during early onset of symptoms of an anaphylactic reaction.

Increasing prevalence of food allergies is a major factor driving epinephrine market growth. According to a research conducted by the Centers for Disease Control and Prevention (CDC) in 2013, in the U.S., from 1997 to 2011, food allergies among children increased around by 50%. Moreover, according to the European Academy of Allergy and Clinical Immunology (EAACI), over 17 million people in Europe were affected by food allergy in 2015. For instance, in November 2017, Kaléo, Inc. received the FDA approval for its supplemental New Drug Application (sNDA) for AUVI-Q, the first and only epinephrine auto-injector (EAI) specifically designed for the treatment of life-threatening allergic reactions, including anaphylaxis, in infants and small children weighing 16.5 to 33 pounds.

What are the growth estimates for epinephrine market till 2026?

The global epinephrine market is estimated to surpass US$ 5.2 Billion by 2026.

Which are the prominent epinephrine market players across the globe?

What are the key factors hampering growth of epinephrine market?

Unavailability of approved drugs due to increasing number of product recalls by various developers is one of the major factors that is expected to hamper growth of the market over the forecast period.

What are the key factors driving growth of the epinephrine market?

Increasing prevalence of chronic respiratory diseases is one of the major factors that is expected to propel growth of the market over the forecast period.

What is the compound annual growth rate (CAGR) of the epinephrine market for next 8 years?

Among regions, North America is expected to hold dominant position in the global epinephrine market over the forecast period.

Us 503b compounding pharmacies market analysis

According to the Journal of American Pharmacist Associatio...

In the field of pharmacy, compounding is preparation of a ...