In July 2021, Topcon Healthcare has acquired VISIA Imaging S.r.l, a company engaged in the manufacturing of ophthalmic devices. This strategic move will improvise Topcon’s manufacturing and development capabilities associated with anterior segment devices that include fundus cameras. This acquisition is further expected to bolster Topcon’s position in the ophthalmic device industry.

In April 2021, Samsung has launched the EYELIKE Fundus Camera to improve access to affordable eye care. The Eyelike fundus imaging system uses a lens attachment and AI algorithm on Samsung Galaxy smartphones to detect and analyse the images for eye diseases. This launch will strengthen the company’s smartphone-based fundus cameras portfolio and the product is set to witness significant demand in developing countries such as Vietnam, India, Morocco, and Papua New Guinea

In March 2021, Oculus has received FDA 510(k) clearance for Pentacam AXL Wave. Pentacam AXL Wave is the latest and most versatile member of the Pentacam family, incorporating intuitive reports based on clinical studies, with network compatibility and full operability of all Pentacam software and examinations.

North America held dominant position in the global fundus cameras market in 2020, accounting for 37.3% share in terms of volume, followed by Europe and Asia Pacific, respectively. Dominance of North America market in 2020 can be attributed to early adoption of advanced technology products in the region, recent launch & approval of products, and increasing lifestyle diseases with ophthalmic diseases in the region. 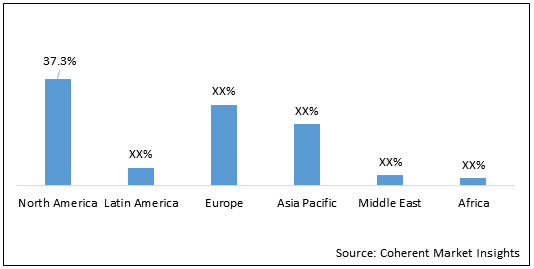 Increasing prevalence of glaucoma is expected to propel growth of the global fundus cameras market over the forecast period. For instance, according to The International Agency for the Prevention of Blindness, 80 million people are expected to suffer from glaucoma by 2020 compared to 20 million since 2010.

R&D in fundus photography is expected to offer lucrative growth opportunities for players in the global fundus cameras market. For instance, in February 2019, researchers from SASTRA Deemed University, India, proposed a hybrid segmentation algorithm to extract the blood vessels from the fundus image of retina.

Moreover, development of smartphone-based fundus camera is also expected to aid in growth of the market.

Increasing prevalence of diabetes is expected to propel growth of the global fundus cameras market over the forecast period. For instance, according to the study, “Global and regional diabetes prevalence estimates for 2019 and projections for 2030 and 2045: Results from the International Diabetes Federation Diabetes Atlas, 9th edition”, published in the journal Diabetes Research and Clinical Practice, in September 2019, 463 million people are expected to suffer from diabetes in 2019 worldwide and the number is expected to reach 578 million by 2030 and 700 million by 2045.

Increasing prevalence of diabetic retinopathy is expected to propel growth of the global fundus cameras market over the forecast period. For instance, according to the study ‘Global causes of blindness and distance vision impairment 1990-2020: a systematic review and meta-analysis’, published in the journal Lancet, in 2015, 2.6 million people were visually impaired because of diabetic retinopathy, and the number is expected to reach 3.2 million in 2020. 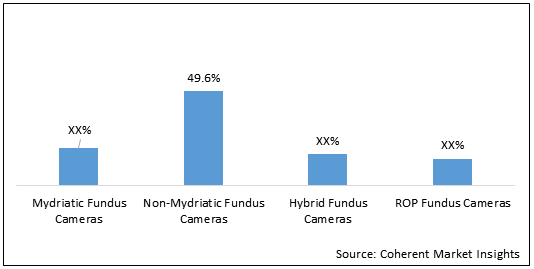 High cost associated with fundus cameras is expected to hinder growth of the global fundus cameras market. For instance, VisuCam 200 (Carl Zeiss) costs in the range of US$ 25,000 to US$ 30,000, which may be significantly high for private clinics or tier II and tier III hospitals.

Moreover, lack of awareness among patients in developing countries is also expected to limit the adoption of fundus cameras.

Significant growth in the ageing population has led to increase in the number chronic diseases affecting vision. Glaucoma can affect any age group including newborns, infants, children and the elderly .Similarly, there has been rise in AMD and diabetic retinopathies. There has also been a growing trend of premature births globally as result new born retinal disorders prevalence has spawned A fundus camera or retinal camera is a specialized low power microscope with an attached camera designed to photograph the interior surface of the eye.  Mydriatic cameras, non-mydriatic cameras, hybrid cameras, handheld cameras, Retinopathies of Prematurity (ROP) cameras are types of fundus cameras.

Moreover, government and non-governmental organizations are focused on offering mobile vision centers, which is expected to aid in growth of the global fundus cameras market. For instance, in September 2021, Sightsavers, a non-governmental organization collaborated with SBI Capital Markets, as a part of its CSR program under healthcare, to set up three mobile vision centers in various cities in India.

Increasing prevalence of glaucoma and increasing geriatric population are the factors fueling growth of market.

The Non-Mydriatic Fundus Cameras segment is the leading product type segment in the market.

High cost associated with fundus cameras and lack of awareness among patients in developing countries are factors hindering growth of the market.

Why is the North America region dominating the market?

North America region is expected to hold dominant position in the market over the forecast period. The growth of the market in the region is driven by increasing geriatric population associated with more ophthalmic problems, and new product launches in recent years.