A carbon credit is a tradable permit or certificate that provides the holder of the credit the right to emit one ton of carbon dioxide or an equivalent of another greenhouse gas – it is essentially an offset for producers of such gases. The main goal for the creation of carbon credits is the reduction of emissions of carbon dioxide and other greenhouse gases from industrial activities to reduce the effects of global warming. Carbon credit is a mechanism for the minimization of greenhouse gas emissions. Governments or regulatory authorities set the caps on greenhouse gas emissions. For some companies, immediate reduction of emissions is not economically viable. Therefore, they can purchase carbon credits to comply with the emission cap. A carbon offset that is exchanged in the over-the-counter or voluntary market for credits is referred as Voluntary Emissions Reduction (VER). Whereas, emission units (or credits) created through a regulatory framework with the purpose of offsetting a project’s emissions is called as Certified Emissions Reduction (CER). The main difference between the two is that there is a third party certifying body that regulates the CER as opposed to the VER.

An international carbon credit is being adopted by various countries and state government bodies, which is a major trend in the global carbon credit market. The Kyoto mechanism is vastly adopted by the European Union, for which the European Union launched European Union Emission Trading Scheme (EU ETS) in 2015. Through this, EU employs a basic cap and trade model for EU companies and countries. However, the government of the U.S. did not sign the Kyoto Protocol, thus there is no cap limit for carbon emissions in the country. Nevertheless, many companies and state government bodies are adopting voluntary commitment to reduce carbon emissions. For instance, in 2013, California's Cap-and-Trade Program, an initiative took by the state of California, started its own cap-and-trade program. The rule is applicable to electric power plants, industrial plants, and fuel distributors. In conclusion, the adoption of carbon credit by the local government bodies and companies is a major trend in the global carbon credit market.

In order to reduce the overall carbon emissions, companies have to adopt new advanced technologies for their manufacturing processes, which is costly. According to Coherent Market Insights’ analysis, it is found that many companies find it cheaper to purchase extra carbon credits rather than changing the whole manufacturing process.

Globally, most of the countries are affected by COVID-19 and most of the countries have announced lockdown. Pollution and GHG emissions have fallen across the continents as countries imposed lockdowns and restrictions to contain the spread of the Covid-19. The COVID-19 has brought about short-term environmental benefits as temporary reduction in carbon dioxide and other greenhouse gases, as people were forced to stay at home and industries such as mining, construction, and textiles remained closed for a period. According to the OECD (The Organization for Economic Co-operation and Development) Organization, in China, carbon emission reduced by 25% which is equivalent to around 200m tons of CO2 (MtCO2) in month of February 2020, compared with the same month in 2019. Also, the pandemic has interrupted global supply chains, including those for renewable energy projects, which could delay or obstruct their completion. The carbon offset registries are also considering Covid-19’s impact on reporting period deadlines. If there are hold ups, such a delayed site visits, it may be difficult to finish verification within given reporting timeframe. The Climate Action Reserve is allowing programmatic deadlines to extend by 6 months – if the extension reason is directly Covid-19 related.

Europe held dominant position in the global carbon credit market in 2019, accounting for 51.2% share in terms of value, followed by North America and Asia Pacific. 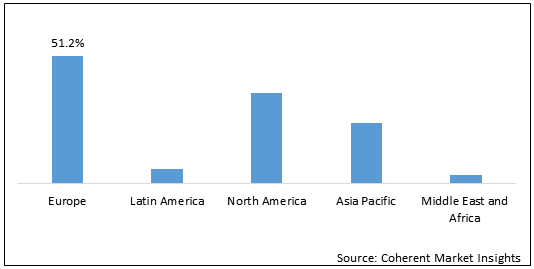 Europe is expected to account for the largest market share during the forecast period. The developed countries in Europe such as the U.K, Germany, and other European countries are considered prominent buyers in the global carbon credit market. In order to become climate-neutral EU by 2050, the European Union launched EU Emissions Trading System (EU ETS) in 2005, an international emissions trading system. The EU Emissions Trading System (EU ETS) initiative is divided into four timely phased manner in which carbon emission is reduced in order to reduce greenhouse gas effects by at least 40% by 2030 compared to 1990 (as per Paris agreement, initiated in December 2015).

Asia Pacific is expected to exhibit significant growth during the forecast period. India is becoming one of the emerging players for global carbon credit market. As India's greenhouse gas (GHG) emission is below the carbon cap limit, Indian companies are entitled to sell surplus credits to developed countries.

Among sector, the energy segment is expected to hold dominant position in the global carbon credit market during the forecast period. For instance, according to Coherent Market Insights’ analysis, energy segment accounted for around 53.3 billion across the globe in 2019. Solar or Wind power is used to inject power to the grid, this can replace the power generated from the conventional energy sources thereby reducing the carbon dioxide emissions. Such projects can earn carbon credits in the form of Clean Development Mechanism (CDM) projects. 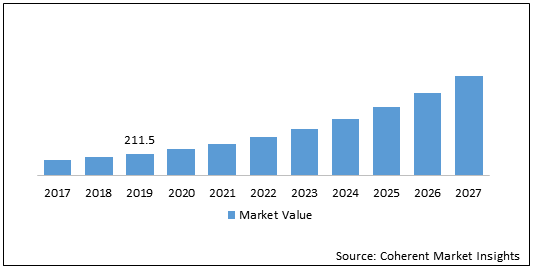 Carbon credits provide business with a verified method to balance unavoidable carbon footprint by directly supporting projects that are proven to reduce carbon emissions. One Carbon Offset/Credit represents the reduction of greenhouse gases equal to one metric ton of carbon dioxide equivalent (CO2e). The United Nations' Intergovernmental Panel on Climate Change (IPCC) developed a carbon credit proposal to reduce worldwide carbon emissions in a 1997 agreement known as the Kyoto Protocol. The Kyoto Protocol was signed in Kyoto, Japan, in 1997 by 192 industrialized countries. Countries that ratify the Kyoto Protocol are assigned a maximum limit of CO2 emission levels. Emitting more than the assigned limit will result in a penalty for the violating country in the form of lower emissions limit for the following period. However, if a country wants to emit more greenhouse gases than its allowed limit (without penalty), then it may participate in carbon trading using an Emissions Reduction Purchase Agreement (ERPA).

Among sector, forestry segment is expected to exhibit the highest growth during the forecast period. Forests play a vital role in combating climate change. Tropical forests cover about 15 percent of the world’s land surface and contain about 25 percent of the carbon on the planet’s surface. The loss and degradation of forests accounts for 15 - 20 percent of global carbon emissions. The majority of these emissions are the result of deforestation in the tropics, largely due to conversion of the forest to more lucrative economic activities such as agriculture and mining. The market for forest carbon credits has been significantly growing over the past ten years. Currently, there are three different project types that are eligible to produce carbon offsets; afforestation or reforestation, avoided conversion, and improved forest management (IFM). Improved forest management projects are the most common compliance offsets traded in California’s cap and trade program.

What is the expected market size of carbon credit in 2027?

What is the expected compound annual growth rate (CAGR) of the market during the forecast period (2020-2027)?

ased on sector, which segment held the largest market share in the market in 2019?

The introduction of the fourth dimension (4D) to the third...