High Performance Pigments Market, by Product Type (Organic and Inorganic), by End-use industry (Coatings, Cosmetic Products, Inks, Plastics And Others), and by Geography - Global Trends and Forecast to 2025

Global High Performance Pigment Market to Surpass US$ 7.22 Billion by 2025

However, high costs of HPPs is a major restraining factor for growth of the market. This high price is attributed to its properties such as excellent heat stability and high color strength.

Inorganic was the dominant segment in the market in 2016. This is attributed to high stability, durability, and opacity of inorganic HPPs. Bismuth vanadate pigments are environment friendly and are used in manufacturing orange, brilliant yellow, green, and red colors with good hiding power and gloss. Cadmium pigments are used in thermosetting and thermoplastic powder coatings owing to heat resistance and high performance of these pigments. Organic segment is expected to witness high growth, owing to increasing demand for environment-friendly products in various industries such as coatings. Organic HPPs such as perylenes, perinones, quinacridones, and diketo pyrrolo pyrroles provides red to orange shades, and has enhanced weather and light fastness, heat stability, and average migration properties.

Coatings is the largest application segment, with automotive coatings being the largest revenue contributor. According to India Brand Equity Foundation — a trust established by the Department of Commerce, Ministry of Commerce and Industry, Government of India — the Indian automotive market is expected to expand at a CAGR of 25% during 2012–20. This in turn is expected to augment growth of the automotive coatings sub-segment. Polyvinylidene difluoride (PVDF) architectural coatings resist fading, humidity, chalking, abrasion, and chemicals and retain gloss, color and appearance.They are widely used in metal roofing, wall panel systems and others. Growing demand for polyvinylidene difluoride (PVDF) architectural coatings is also propelling growth of coatings application in the HPPs market.

Asia Pacific is the largest and the fastest growing region in the HPPs market. This is attributed to rapid growth in automotive, cosmetics, and other sectors especially in emerging countries such as India, China, and South Korea. The cosmetics end-use industry in the region is growing at a rapid pace, in turn creating a conducive growth environment for the high performance pigments market. For instance, according to the International Trade Association, USA, the cosmetics market was valued at US$ 7.1 billion in South Korea in 2016, while the total local production and exports increased by 8.2% and 61.6%, respectively, as compared to 2015.

North America is the second largest market for HPPs due to increasing demand for HPPs in coatings, plastic, and other industries. For instance, according to the International Organization of Motor Vehicle Manufacturer (OICA) — an international trade association — the total registration or sales of new vehicles was 12,100,095 in 2015 and 12,198,137 in 2016 in USA. This growth in the automotive industry is driving growth of the HPPs market in this region.

Europe is a lucrative market for HHPs, owing to growing demand for HPPs for application in cosmetics, automobiles, and plastic industries is driving growth of the marker in the region. For instance, according to Cosmetics Europe — one of the leading European trade associations — the market of cosmetics in Europe was valued at US$ 89.70 billion in 2015. Thus, there is a significant demand for HHPs from cosmetics industry. 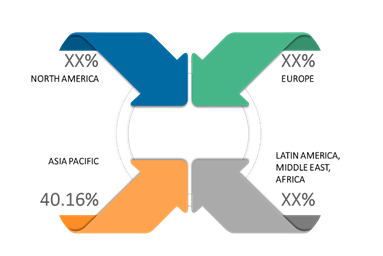 Asia Pacific is expected to account for 40.16% revenue share in the global HPPs market. Increasing demand for HPPs in the automotive and aerospace coatings is fuelling growth of the HPPs market in the region. For instance, according to Society of Indian Manufacturers, the domestic sales of automobiles in India was 1,97,24,371 in 2014-2015 and increased to 2,04,68,971 in 2015-2016.

HPPs manufacturing companies are launching innovative products such as in November 2017, CATHAY INDUSTRIES launched CATHAYRED, which is a high performance red iron oxide pigment; in April 2017, BASF SE launched Sicopal Red EH 2370 (L 3050), which has a new Colour Index, Pigment Red 290, and Paliogen Red L 3990 for automotive and high-end industrial applications. Market players are also involved in merger and acquisitions, production plant expansion, and partnerships in order to sustain their position in the market. For instance, in April 2017, BASF SE and Landa Labs, which is a nanotechnology innovation center of Landa Groups, announced their partnership for development of nano-pigment technology in ultra-high transparency pigment, which are easily dispersible, at the European Coatings Show (ECS) in Nuremberg, Germany.

High Performance Pigments (HPPs) are inorganic and organic pigments with excellent effectiveness that include superior ease of dispersion, high tinting strength, and other properties. These have broad range of applications such as printing ink for outdoor sinage, non-impact printing and packaging, automobile coatings, decorative coatings, industrial coatings, plastics, cosmetics and other applications.

Asia Pacific is the largest and fastest growing region in the global high performance pigments market. This is attributed to growth in various industries such as automotive, construction, and cosmetics. North America is projected to register significant growth in the high performance pigments market owing to significant demand for environment friendly pigments and highly effective pigments especially in the coatings industry.

"*" marked represents similar segmentation in other categories in the respective section.

What are the growth estimates for high performance pigments market till 2025?

The global high performance pigments market is estimated to surpass US$ 7.22 Billion by 2025.

Which are the prominent high performance pigments market players across the globe?

Which segment based on product type, accounted for the highest demand in the high performance pigments market?

Among product type, inorganic segment accounted for the highest market share in 2016.

What are the key factors driving growth of the high performance pigments market?

Increasing demand for HPPs in automotive and industrial coatings, plastics and cosmetic industries is one of the major factors that is expected to propel growth of the market over the forecast period.

What is the Compound Annual Growth Rate (CAGR) of the high performance pigments market for next 8 years?

The global high performance pigments market is estimated to exhibit a CAGR of 4.0% over the forecast period.

Which region is dominating the high performance pigments market growth?

Among regions, Asia Pacific accounted for the highest market share of 40.16% in terms of revenue in the global HPPs market in 2016.