Hydrogen peroxide (H2O2) is a colorless liquid slightly viscous than water and bitter in taste at room temperature. Hydrogen peroxide easily decomposes into water and oxygen. It undergoes spontaneous reaction when it comes in contact with any organic material. Lower concentration of hydrogen peroxide (3-9%) is used for medical applications and as a bleach for cloth & hair. Higher concentrations (35%, 50%, and 70%) are generally used in paper & pulp, textile, chemical industries, and as a part of rocket fuel.

Hydrogen peroxide is used to make sodium perborate and sodium percarbonate, which are further utilized as bleaching agents in detergent manufacturing. Industry grade hydrogen peroxide is expected to witness increasing demand among consumers due to large number of applications and expansion of the paper and pulp industry across the world.

Among region, Asia Pacific region accounted for the largest market share of around 44.9% in 2021, owing to high demand & presence of hydrogen peroxide manufacturers in the region. Local players operating in China, India, and South East Asia are investing in hydrogen peroxide industry to tap potential local market. For instance, in June 2019, in India, Meghmani Finechem Ltd (MFL), an essential chemical manufacturing company invested US$ 4,000 Mn for expansion of existing projects and a new project at its facility in Dahej, Gujarat. The company received funding for its projects through internal accruals and the plant was commissioned by June 30, 2019. 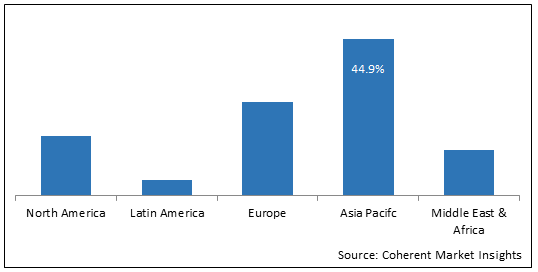 Although, pulp & paper, chemical synthesis, and other demand-generating industries continue to lead the industry, specialty application areas have also emerged as significant potential market growth drivers. Recent years have seen a noticeable increase in demand across the electronics sector, which is likely to place it as the fastest-growing end user in future.  The semiconductor industry's growing preference for high-purity concentration grades is projected to create new business opportunities for key players. 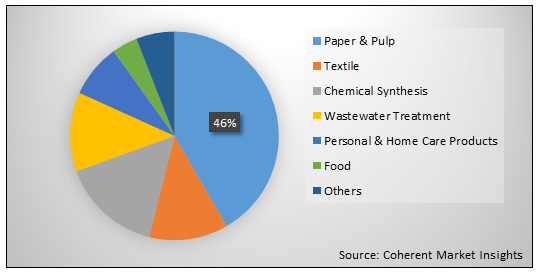 Among application, paper & pulp segment accounted for the largest market volume share of 46% in the global hydrogen peroxide market in 2021. This segment is expected to hold dominant position in the market over the forecast period, owing to rising adoption of hydrogen peroxide as a clean oxidizing agent by paper & pulp industries.

Key manufacturers of hydrogen peroxide are focusing on expanding their production capacities to meet rising demand from customers. For instance, in February 2019, the Hansol Chemical Company expanded its hydrogen peroxide plant in Jeonju, South Korea. Such activities by leading players are positively impacting growth of the hydrogen peroxide market.

What was the global hydrogen peroxide market size in 2021?

Rising application of hydrogen peroxide in food industry, owing to its biological degradability and remarkable chemical properties is one of the major factors that is expected to propel growth of the market over the forecast period.

Stringent regulations imposed by agencies such as Occupational Safety and Health Administration (OSHA) based on exposure of hydrogen peroxide is one of the major factors that is expected to hamper growth of the market over the forecast period.