Coronary stents are small interventional devices used for opening blocked arteries. These stents are also used to prevent re-narrowing of the arteries. The procedure used to reduce blockages is known as Percutaneous Transluminal Coronary Angioplasty (PTCA).

Increasing prevalence of coronary heart disease is a major factor boosting growth of India coronary stents market over the forecast period. For instance, according to the study ‘Divergent trends in ischaemic heart disease and stroke mortality in India from 2000 to 2015: a nationally representative mortality study’, published in the journal Lancet in August 2018, heart ailments caused more than 2.1 million deaths in India in 2015 at all ages. Moreover, 0.9 million deaths were caused by coronary heart disease and 0.4 million by stroke in the year.

Moreover, high adoption of stents in treatment of cardiovascular blockage is also expected to aid in growth of the market. Stents implantation is highly preferred as compared to more invasive bypass surgeries, owing to non-invasive nature, which offers less discomfort and shorter recovery time for patients.

Lack of centers offering PCI and primary PCI procedures, especially in tier II and tier III cities, and low accessibility to healthcare facilities in rural areas in India is expected to inhibit growth of the market.

The market is witnessing increasing adoption of PCI. For instance, according to a report by National Intervention Council , India, and Apollo Health City, India, published in April 2019, a total of 3,87,416 PCI procedures were performed in 705 centers in India in 2017, which accounted for a 3.7% growth compared to that in 2016.

The use of a balloon coated with paclitaxel and iopromide is preferred over bare-metal stents in patients with high bleeding risk undergoing PCI. According to the results of the single-blind, randomized, noninferiority DEBUT trial conducted by researchers from Harvard Medical School and published in The Lancet in May 2019, PCI with drug-eluting balloons is noninferior to PCI with bare-metal stents for treatment of de novo coronary artery lesions in patients with high bleeding risk. 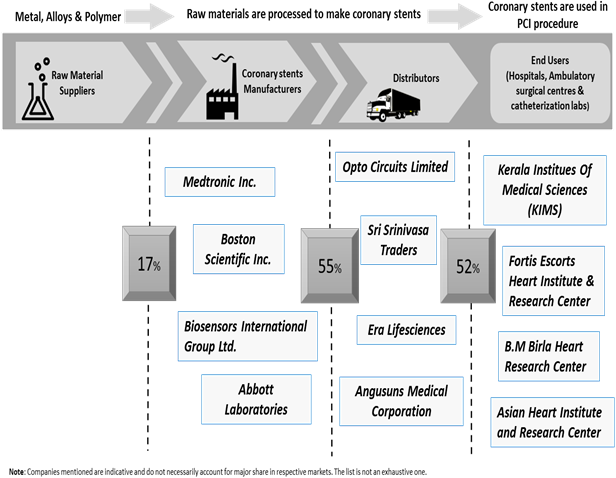 Major players in the market are focused on gaining regulatory approvals to expand their product portfolio. For instance, in May 2018, Abbott received the U.S. FDA approval for XIENCE Sierra, the new generation of everolimus-eluting coronary stent. XIENCE received approval from the Japan’s regulatory body in April 2018.

Stents are medical devices intended to use for the treatment of blocked vascular paths and the procedure used to reduce the blockages is known as percutaneous transluminal coronary angioplasty (PTCA). The stents used for arterial blockage are known as coronary stents or heart stents. There are three types of stents such as drug eluting stents, bare metal stents, and Bioresorbable Vascular Scaffold. Drug eluting stents are small expandable mesh tube made up of medical-grade stainless steel or cobalt alloy metal, that are inserted into the coronary arteries of patients suffering with atherosclerosis. Stent helps to hold the artery open, to release a drug that prevents blockage in artery and improves blood flow in artery.

Lack of centers offering PCI and primary PCI procedures, especially in tier II and tier III cities, and low accessibility to healthcare facilities in rural areas in India is expected to inhibit growth of the market.

What are the growth estimates for coronary stents market till 2026

The global coronary stents market is estimated to surpass US$ 13.0 Billion by 2026

Which are the prominent coronary stents market players across the globe?

What are the key factors hampering growth of the coronary stents market?

What are the key factors driving growth of the coronary stents market?

Increasing adoption of stents implantation in cardiovascular blockage is one of the major factors that is expected to propel growth of the market over the forecast period.

What is the Compound Annual Growth Rate (CAGR) of the coronary stents market for next 8 years?

The global coronary stents market is estimated to exhibit a CAGR of 6.8% over the forecast period

Which region is dominating the coronary stents market growth?

Among regions, Europe holds dominant position in the coronary stents market, owing to presence of large obese population with high risk of coronary blockage in the region