Liquid smoke is a flavor primarily used to add smoky fragrance across various cuisines and is mainly available in yellow and red colors. It is also used to enhance the shelf-life of the food items especially meat and seafood. It is water-soluble and generally produced by condensing the smoke from wood along with the additives. It is a natural by-product of burnt wood and is distilled into a concentrate followed by filtering its impurities. Liquid smoke is majorly used across food such as marinades, barbecue sauces, and "barbecue" flavored foods. It is taste like smoke and there are different type of smoke flavors are also available which includes mesquite, hickory, and pecan. Moreover, it is also used as a substitute for bacon food that uses cured pork for obtaining smoky taste.

Increasing demand for meat products in the U.S. country is expected to fuel the market growth of liquid smoke. According to the North American Meat Institute, the meat and poultry industry is the largest segment of U.S. agriculture. The meat production in the country was totaled 52 billion pounds in 2017 and poultry production was totaled 48 billion pounds in 2017. Therefore, the growing demand for meat products is expected to augment the market growth.

Still few processed meat manufacturers prefer the conventional method of smoking meat products since it provides a strong flavor to meat products such as beef and pork. Moreover, the conventional method of smoking meat also provides a distinct texture. This factor is expected to limit the adoption of liquid smoke which in turn is hindering the market growth.

Rising adoption of liquid smoke equipment among major players in order to reduce the overall cost production is expected to offer enormous growth opportunity to the market of liquid smoke. The use of advanced equipment favor has less impact on the environment and is also cost-effective as compared to traditional smoking methods. Hence, this is expected to fuel market growth over the forecast timeframe.

Rising adoption of liquid smoke in various cheese products will favor market growth over the forecast period. Various manufacturers of dairy products are using liquid flavor in cheese product such as provolone, mozzarella, and scamorza, for expanding their range of smoked cheese products. For instance, in November 2018, Norseland introduced Applewood Vegan smoked cheese. 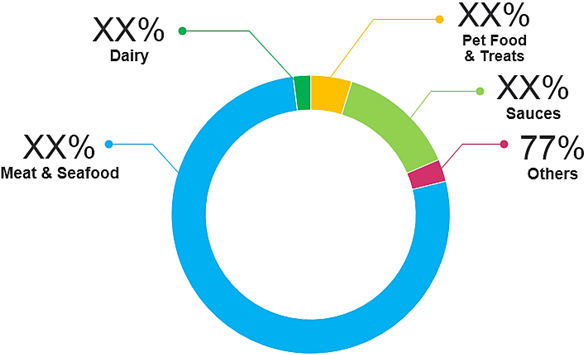 On the basis of application, meat and seafood dominated the global liquid smoke market in 2018 with around 77% of market share in terms of revenue, followed sauces and pet food & treats, respectively.

Smoke and smoke flavor are ingredients and must be listed accordingly. The following designation shall be used depending on how these ingredients were added to the meat product:

Liquid smoke is the type of artificial smoke which is produced by the pyrolysis method. Liquid smoke is used in various cuisines in order to add smoky flavor and aroma to the food. It is usually available in red and yellow colors. The rise in usage of the liquid smoke globally is mainly attributed to its widespread use for improving the shelf life of food products, without additional processes such as grilling and roasting.

On the basis of core material, global liquid smoke market can be segmented into meat & seafood, sauces, pet food & treats, dairy, others. The meat & seafood segment is expected to witness substantially growth during the forecast period, owing to the rising demand and consumption of various meat products across the globe. This scenario is expected to foster growth of the global liquid smoke market during the forecast period.

What are the Major growth driving factors for the Liquid Smoke Market during the forecast period?

Surge in growth in the processed food industry and rising demand for meat products across the globe is fostering the demand growth, indirectly driving the market for Liquid Smoke.

What are the segments considered in the Global Liquid Smoke market?

The Liquid Smoke market has been segmented by Application across 5 major regions.