Lubricants are substances that are utilized to reduce the friction between moving surfaces. Lubricants are basically utilized for machinery maintenance and reliability. Since automobiles are its main application, the global lubricants market is primarily driven by the rising demand from the automotive industry The regulatory bodies of certain European and North American countries have started promoting bio-based lubricant, due to its low emission of greenhouse gases. However, the instability of raw material value ruins its market development. Additionally, lubricant manufacturers are showing a lack of enthusiasm for the production of bio-based lubricants as their application is restricted to specific industries. Furthermore, consumers are additionally wondering whether or not to take on bio-based lubricants since they costs more than mineral lubricants. Growing Research & Development drives are setting out open doors for the development of innovative products in the lubricant industry. In addition, the commercialization of soybean and palm oil lubricants is expected to create lucrative opportunities for players in the global lubricants market.

The planning of combustion engines has evolved significantly when the primary commercial car was developed by ford in the early 20th century. The internal elements of the engine are now exposed to significantly more pressure and heat due to engine improvement. This has consequently prompted exceptionally high Revolutions per minute motors which require better quality engine oil. Apart from this, the transmission framework inside a vehicle has also improved with vehicle reaching up to 150 miles per hour. The gear system and bearing technology have additionally improved. This multitude of enhancements requires better lubricants, thus indicating the need for lubricants to evolve and expand.

Among regions, Asia Pacific held the highest market share of 42.63% in 2020. China, India, and ASEAN are expected to offer rewarding opportunities to the lubricants market in Asia Pacific. Fast industrialization, ascend in urbanization, and expansion in foreign direct investments in automotive, industrial machinery industries are supporting the demand for lubricants in Asia Pacific. Rise in demand for industrial oils to increase the productivity and efficiency of cracking pumps and equipment in the U.S. is also impelling the lubricants market in the country. According to global economy, U.K., Germany, and Russia in Europe are assessed to offer worthwhile opportunities to lubricant manufactures, owing to increasing sales of passenger vehicles in these countries. The implementation of rigid guidelines on vehicular discharges and increase in government pressure on original equipment manufacturer (OEMs) to manufacture eco-friendly engines in Europe are helping the market grow in the region. 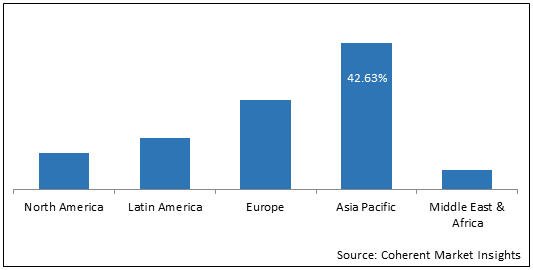 Hybrid vehicles contain both small internal combustion and electric engine for ideal power use and diminishing discharges from vehicles. Internal combustion engine inside a vehicle needs lubricants, generally engine oil, and transmission liquid. According to Energy Insights by Mc Kinsey, the increasing number of hybrid vehicles will reduce the demand for lubricants. This factor combined with increasing battery parity will diminish the volume of the global lubricants market. Batteries for electric vehicles are exorbitant; however, with further developed innovation, the cost is reducing, and the driving range per charge is increasing. These factors will have a huge impact on lubricant utilization.

Further developed advancements along with environmental concerns are causing the recovery of synthetic lubricants and bio-based lubricants. The better form of bio-based grease demands for more viable additives to sustain with oxygen-containing esters in the oils. The demand is increasing for oils from algae with a combination of mineral oil, synthetic oil or plant based oil in new feedstocks in the lubricants market. 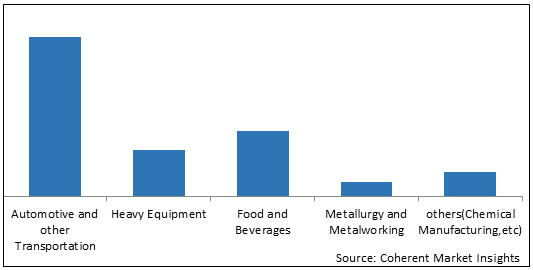 The automotive and other transportation segment held the largest market share in the global lubricants marketThis is due to rising possession of passenger cars by consumers. In automotive industry, lubricating oils are utilized to diminish the friction between two parts of a vehicle. They additionally assist with controlling the temperature by retaining the heat produced by moving parts. The rising industrialization is expected to increase the demand for general industrial oils in the market. Industrial oils are extensively utilized in various industries such as manufacturing, oil and gas, food processing, and others. Other application areas of lubricants include aviation, marine, military, and others. Marine oils are intended for high, medium, and slow-speed marine motors. These are additionally utilized in the aviation industry in different applications, for example, bearings, gears, piston rings, and others.

Engine oil is the most impacted and largest product type in the global lubricants market. During the pandemic, the demand from travel vehicle segment was at all-time low and because of that it witness a negative impact in the market. In the commercial segment, the demand of engine oil is low. During the pandemic OEMs have halted production, which has further decreased the demand for engine oil. Due to nationwide lockdowns, the U.S, India, Germany, and other countries have seen a downfall in traffic and very little to no automotive movement.

Industrial lubricants are used to decrease the wear and tear of materials and reduce friction. These lubricants can be either petroleum based or water based. The primary function of industrial lubricants is to avoid metal contact amongst the tools. Industrial lubricants show good corrosion protection properties and demulsibility. These lubricants help extend the life of equipment or tool used in industrial operation. They are utilized in various equipment to yield a specific performance level. There are a few key properties that decide the performance of lubricants. From the lubrication theory perspective, density and viscosity of a lubricant are the main parameters. Early in the twentieth century, vegetable oils, fats, and mineral oils were generally considered as lubricants. Semisynthetic lubricants also known as synthetic blend oils it contains small amount of synthetic oil and blended with mineral oils to boost the properties of synthetic without increasing the cost of lubricants. Semisynthetic lubricants offer better performance at lower temperatures, set to fuel its demand in automotive application.

Growing demand for biodegradable lubricants is expected to emerge as a better opportunity for market players in the near future. According to the current Indian and Global scenario of the lubricants market, there is increase in the demand for bio lubricants and synthetic lubricants for the large-scale oil and gas industries, owing to increasing awareness about the substitute solution for mineral oil based products. For instance, MOSIL a lubricants company provides the exact solution for the increasing demands for bio-lubricants and synthetic oils. For over 40 years, MOSIL manufactures and delivers best lubricating solutions to all types of industries in India and other countries. MOSIL offers tailor made lubricant solutions according to the requirement of its consumers.

“*” marked represents similar segmentation in other categories in the respective sections.

What will be the lubricants market size in 2028?

What are the major factors that are expected to drive the growth of the market during the forecast period?

Multiple applications of lubricants in the automotive sector are projected to propel the overall product demand during the forecast period.

What are the trends in the global lubricants market?

The growing number of hybrid vehicles is expected to hamper the growth of the market.

What is the current size of market?