Lung Cancer Diagnostic and Screening Market to surpass US$ 3,515.9 Million by 2028

During the pandemic, lung cancer screening programs had been largely suspended. Due to shut down, there was increasing demand for cancer screening test. Prior to the pandemic, according to article published 2019 in Official Journal of the Asia Pacific Society of Respirology, lung cancer was the leading cause of cancer diagnosis and mortality worldwide, accounting for 11.6% of new cases and 18.4% of deaths. The poor prediction of symptoms of lung cancer largely credited to the majority of patients being diagnosed at an advanced stage. The pandemic witnessed a sharp drop in referrals to lung cancer services, with concerns of a surge of late?stage presentations followed by a rise in mortality rates. Due to the same indications between lung cancer and COVID-19, including cough and breathlessness, led to patients self-isolate due to concern of being infectious. Moreover public health organizations advised to remain home has resulted in hesitation to attend healthcare services. As a result, screening of lung cancer has been hampered during the pandemic. 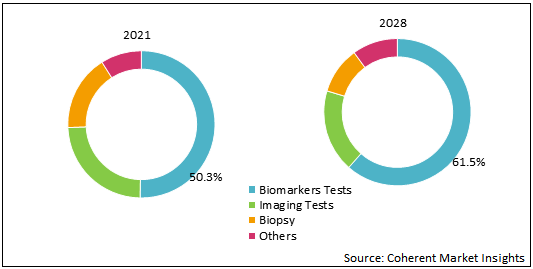 Increasing R&D activities and product approvals are expected to drive growth of the global lung cancer diagnostic and screening market.

Major factors driving the market growth include rising focus on research and development of lung cancer diagnosis and screening test. For instance, in April 2020, researchers at the Massachusetts Institute of Technology (MIT) developed a nanoparticle-based approach that allows the early diagnosis of lung cancer through a simple urine test. The strategy detects biomarkers resulting from the interaction of peptide-coated nanoparticles with disease-associated proteases in the tumor microenvironment. Experiments in two different mouse models of lung cancer showed that the urine test could detect tumors as small as 2.8 mm. The researchers hope that this type of noninvasive diagnosis could reduce the number of false positives associated with an existing test method, and help to detect more tumors in the early stages of the disease.

Furthermore, increasing adoption of inorganic growth strategies by market players such as collaborations and acquisitions are expected to boost the global lung cancer diagnostic and screening market growth in the near future. For instance, in January 2020, Amgen announced strategic collaborations with leading diagnostic companies Guardant Health, Inc. and QIAGEN N.V. to develop blood and tissue-based companion diagnostics (CDx), respectively, for investigational cancer treatment AMG 510. AMG 510 is the first KRASG12C inhibitor to advance to the clinic for investigation in treatment of multiple tumor types. KRAS G12C is one of the most frequently mutated oncogenes in human cancer. The agreements with both companies will initially focus on CDx tests for non-small cell lung cancer (NSCLC).

Screening of lung cancer is done, when there is no symptoms for lung cancer. Due to these there is lack of awareness in people to perform screening. This is expected to hinder growth of the market. False positive reports are also expected to hamper growth of the market. For instance, in March 2019, Researchers at the University of Pittsburgh and UPMC Hillman cancer center found that the 96% of people who screen positive for lung cancer don’t actually have a malignant growth. These information is provided by an article published by University of Pittsburg.

North America is expected to be the most dominant region in the lung cancer diagnostic and screening market during the forecast period. The increasing number of inorganic growth strategies by North America key players such as acquisitions and mergers are major factors propelling growth of the North America lung cancer diagnostic and screening market. For instance in April 2016, AbbVie, a global biopharmaceutical company, announced the acquisition of Stemcentrx and its lead late-stage asset rovalpituzumab tesirine (Rova-T) currently in registrational trials for small cell lung cancer (SCLC). Rova-T is a novel biomarker-specific therapy that is derived from cancer stem cells and targets delta-like protein 3 (DLL3) that is expressed in over 80% of SCLC patient tumors and is not present in healthy tissue. 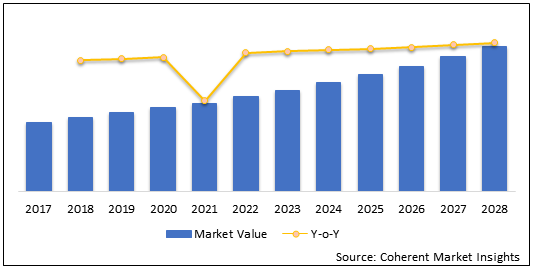 Lung cancer begins in the lungs and may spread to lymph nodes or other organs in the body, such as the brain. Cancer from other organs also may spread to the lungs. When cancer cells spread from one organ to another, they are called metastases. Lung cancers usually are grouped into two main types such as small cell and non-small cell. These types of lung cancer grow differently and are treated differently. According American Cancer Society non-small cell lung cancer is more common than small cell lung cancer. Different people have different symptoms for lung cancer. Some people have symptoms related to the lungs. Some people whose lung cancer has spread to other parts of the body (metastasized) have symptoms specific to that part of the body. Lung cancer symptoms may include coughing that gets worse or prolonged coughing, chest pain, shortness of breath, wheezing, coughing of blood, feeling very tired all the time, weight loss with no known cause.

Regulatory approvals and launches of new screening test are expected to propel growth of the global lung cancer diagnostic and screening market during the forecast period. For instance, in August 2020, the U.S. Food and Drug Administration approved the liquid biopsy companion diagnostic that also uses next-generation sequencing (NGS) technology to identify patients with specific types of mutations of the epidermal growth factor receptor (EGFR) gene in a deadly form of metastatic non-small cell lung cancer (NSCLC).

However, high cost of lung cancer screening test is also expected to limit the market growth. For instance, according to the American Board of International medicine a CT scan costs US$ 300 and more. These test one need to take periodically.

What will be the compound annual growth rate (CAGR) of the market during the forecast period?

The global lung cancer diagnostic and screening market is expected to exhibit a CAGR of 7.8% during the forecast period.

What is the estimated market size of the market in 2021?

What are the growth estimates for the market till 2028?

Which is the major region in the market?

North America is the major region in the market.

Product approvals and launches and increasing research and development activities are expected to drive growth of the market during the forecast period.