Malted barley, or malt, is barley that has been allowed to germinate (or sprout) by being soaked in water. By doing this to the grain, the starches are converted into fermentable sugars. The process ensures that starch in the grain can be made into alcohol. This process is known as malting, this is an important step in the process of producing whisky as well as beer. Malt is also used to make confections such as malted shakes, malt vinegar, flavoured shakes like Milo and Horlicks and some baked goods such as bagels and malt loaf. Malted barley is an ingredient used to manufacture yeast bread and other baked goods.

One of the key factors expected to stimulate market growth during the forecast period is the multiple applications of malted barley in distillery, food industry, beer industry and pharmaceutical industry. Malted barley is the main ingredient in the beer manufacturing, the unique flavour of the beer is due to the malted barley from which it is made of. There is a growing demand for the beer due to the awareness among the people related to its health benefits, improved nutritional qualities and reducing heart related problems. The growth in the beer market is simultaneously increasing the demand for the malted barley.

Malted barley is been used as a source of nutrients which is extracted from the process of fermentations e.g. the production of butanol, glycerol, and acetone. Malt extracts and syrups are prepared by concentrating worts (Wort is the liquid extracted from the mashing process during the brewing of beer or whisky) by evaporation. These products are widely used in baking, confectionery, breakfast cereals, malt beverages, dairy products, and condiments and as a caramel substitute.

Among regions, Europe held dominant position in the malted barley market in 2020, accounting for 29.8% market share in terms of revenue, followed by Asia Pacific and North America.  For instance, in June 2021, Boortmalt, an international malting company announced a significant multi-million pound investment to expand its malting facility in Buckie, on the Morayshire coast. The expansion supports the growing demand for malt in whisky distilling and brewing. Boortmalt’s expansion of its site sees production capacity increased by 50% to approximately 90,000 million tons per year. This expansion has increased the market for the malted barley in the European region. 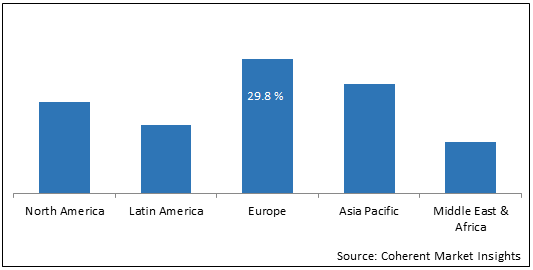 The growing demand for the malted barley in the food processing industry is driving the market for the malted barley. In food processing various types of malts are available in the form of extracts, syrups, liquid or dry, enzymatic or non-enzymatic, dark or light coloured. Malts are used by many segments of the food industry and are used according to their solid content, enzymatic activity, colour, pH factor, ability to reduce sugar level, protein, ash and microbiological profiles. For instance, according to the report by the food navigator in 2020, food processing industries are using malted barley as a source of high protein and phytochemical content. The implication of phytochemicals in the food products provides antioxidants and nutrition for the human body. The rise in the awareness among the people related to the health benefits of the malted food is growing the market for the malted barley. 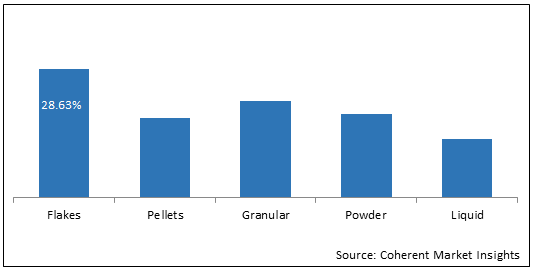 On the basis of form, in 2020, Flakes held largest revenue share of 28.63% in malted barley market. Malted Wheat Flakes add a delicious nutty, sweet flavour to recipes, especially bread. Used in bread, malted wheat flakes add a rusticity to a loaf and an extra malty flavour. Full of insoluble fibre, they are a nutritious grain that adds texture and flavour.

Most industries across the world have been negatively impacted over the last few months due to the covid-19 pandemic. This can be attributed to significant disruptions experienced by their respective manufacturing and supply-chain operations as a result of various precautionary lockdowns, as well as other restrictions that were enforced by governing authorities across the globe. The same applies to the global malted barley market. Moreover, consumer demand has also subsequently reduced as individuals are now keener on eliminating non-essential expenses from their respective budgets as the general economic status of most individuals have been severely affected by this outbreak. However, as respective governing authorities begin to lift these enforced lockdowns, the global malted barley market is expected to recover accordingly.

For instance, according to the US Food & Drug Administration (FDA), Section 76 of the USGSA (United States Grain Standard Act) authorizes GIPSA (Grain Inspection Packers and stockyard Administration) to establish and maintain the standard of barley and other grain regarding, kind, class, quality, and condition. The barley standard facilitates the marketing of barley defines the U.S. barley quality and terms of use in the domestic and global marketplace. The use of malted barley in food products is known to increase the nutritional qualities of the food products. This is expected to increase the demand for malted barley across the globe. Malted Barley is widely used for different types of beverages, as it is the main ingredient for many beverages. The special taste and flavor of beverages such as beer and whiskey is form the malted barley which is used for their production.

What will be the Malted Barley market size be in 2028?

Growing demand for the malted barley in beer and food processing industries are expected to drive the market.

The malted barley is a rich source of natural nutrition such as natural protein, carbohydrates and potassium by which it is highly incorporated in the food products which is a latest trend in the market.

The high cost, high charges of supply chain, low availability of the barley with the demand are the factors hampering the market.