Global Medium-chain Triglycerides Market to Surpass US$ 2,295.6 Million by 2025

Medium-chain triglycerides are saturated fats, synthesized from fatty acids. The compounds are used in various applications, due to its health benefits such as dietary supplements, infant nutrition, personal care products, and medicinal products. Growing health awareness and large population in Asia Pacific has led to increased diagnosis of digestive disorders. According to the National Institute of Diabetes and Digestive and Kidney Diseases, around 60 to 70 million people in U.S. were affected by digestive disorders such as diarrhea, celiac disease, Crohn’s disease, and steatorrhea among others. Also, rising cases of malnourishment in Asia Pacific, Latin America, and Africa is expected to fuel growth of the medium-chain triglycerides market. MCT are prescribed for malnourished children to enhance body development. According to World Health Organization (WHO), severe acute malnutrition affects around 19 million children worldwide in 2016.

North America and Asia Pacific accounted to held major share in the global medium-chain triglycerides market, in terms of revenue in 2016. Asia Pacific is expected to replace North America as the dominant region in the market by 2025. North America held a share of 28.69% in terms of revenue, followed by Asia Pacific (26.72 %) in 2016. Growing demand for dietary supplements in Asia Pacific, due to rising consumer awareness coupled with growing retail sector is expected to drive growth of the medium-chain triglycerides market in the region over the forecast period. For instance, according to India Brand Equity Foundation (IBEF)—a Trust established by the Department of Commerce, Ministry of Commerce and Industry, and Government of India—the retail market in India is expected to nearly double to US$ 1 trillion by 2020 from US$ 600 billion in 2015, due to rising disposable income, urbanization, and attitudinal shifts. Asia Pacific is expected to exhibit a CAGR of 8.53% over the forecast period and is expected to reach US$ 729.4 million by 2025.

Key factors such as favorable growth in sport activities across region, rise in strategic marketing activities by leading manufacturers to build a larger consumer base, and increasing demand for functional food supplements are expected to fuel growth of the market. Moreover, increasing fitness awareness among people fuelled by government healthcare campaigns is expected to propel growth of medium-chain triglycerides market over the forecast period.

Also, stringent government regulations regarding quality of dietary supplements, ensure protection against adulteration and identification of banned ingredients. In the U.S., the National Science Foundation’s Internationals Certified for Sport was created to ensure that supplement label facts match the actual constituents in the product. The NSF GMP certification process indicates that a manufacturer has gone through a stringent manufacturing audit process to meet the guidelines set by NSF. This is expected to regulate the quality of products in the market and may act as a restraining factor for growth of the manufacturers.

Europe was valued at US$ 306.6 million in 2016. Increased adoption among sportspersons and bodybuilders has led to the growth of dietary supplements segment. Also, increased adoption by the medical applications for the treatment of diseases and disorders such as gall bladder disease, obstructive jaundice, AIDS, biliary cirrhosis, cystic fibrosis, pancreatitis, Whipple’s disease, Crohn’s disease, Alzheimer's disease, and seizures has fueled growth of the medium-chain triglycerides market. 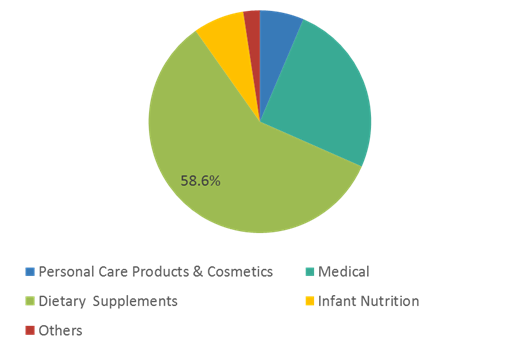 North America and Asia Pacific accounted for major shares in the global medium-chain triglycerides market, in terms of revenue, in 2016 and this trend is projected to sustain throughout the forecast period. However, lack of awareness among populace in rural areas of emerging economies and premium pricing are major factors restraining the market growth, especially in Asia Pacific.