Microturbine Systems Market Is Expected to Exhibit a CAGR of 13.8% During the Forecast period (2020-2027)

Microturbines are new distributed generation technology that is used for stationary energy generation applications. These turbines can produce both heat and electricity on a relatively small scale. A microturbine runs on various types of fuels including biogas, diesel, natural gas, alcohol, hydrogen, and LPG.  It can generate power from 25 kW to 1000 kW and can be used in commercial, residential, and industrial sectors. The majority of the applications of microturbines are in the industrial (mining, oil & gas, wastewater plants, and land rigs) and commercial sector (hotels, office buildings, schools, sports centers, supermarkets, swimming pools, and hospitals) due to the benefits they offer.

The global microturbine systems market is estimated to account for US$ 1,239.7 Mn in terms of value by the end of 2027.

Renewable energy resources have very little impact on the environment and are present in abundance. However, current technologies cannot adequately tap and utilize renewable sources to generate power. On the contrary, non-renewable sources of energy such as oil & gas, and coal-fired power plants although contribute to most of the power generation, produce the environment significantly. According to the U.S. Energy Information Administration, global carbon dioxide emissions were over 30 billion metric tons in 2010 and were expected to reach over 35 billion metric tons by 2020.  This, in turn, has increased the development of alternate energy generation techniques including microturbines. Thus, these factors are expected to drive growth of the global microturbine systems market during the forecast period.

Microturbine systems have very few movable parts, which leads to low operation and maintenance costs comparative to reciprocating and other substitute energy generating systems. Engine-based generators comprised of hundreds of moving parts that require scheduled overhaul, which in turn, impact energy production and increasing maintenance costs. Once installed, microturbine systems can run up to 5,000 hours to 8,000 hours. As a result, microturbines are preferred in several energy-intensive industries as a secondary and primary source as well. Thus, these factors are expected to propel the global microturbine systems market growth over the forecast period. 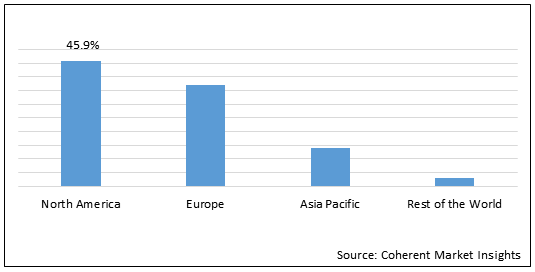 Emerging market players are posing major competition to existing market players. New entrants are offering microturbine systems at a competitive cost as compared to major manufacturers, which in turn, is hindering the market share of key players. Furthermore, market players are struggling to expand their presence due to the presence of various regional players. Hence, these factors are expected to hinder the global microturbine systems market growth over the forecast period.

Some of the microturbine manufacturers such as Capstone Turbine Corporation have expanded their product offerings in the marine market by offering LNG/diesel-fueled marine microturbines and methane-fueled C200 microturbines. These two developments are a result of extensive research and development by the company and are expected to lower operational costs of microturbines as they run on alternative fuels. The innovation of leapfrog supercritical CO2 technology that utilizes the same fuel and generates energy with increased (16% - 19%) efficiency is expected to create new opportunities, thereby keeping the market prospects upbeat over the coming years. The impact of this technology is a game-changer since it reduces heat input for more power output and also reduces the need for cooling technology on the condenser end. In addition, this technology produces output at a double efficiency compared to current technology with less amount of carbon emissions.

Key players operating in the market are focused on mergers and acquisitions, in order to gain a competitive edge in the market. For instance, in October 2010, FlexEnergy Inc. acquired Ingersoll-Rand’s Energy Systems division. 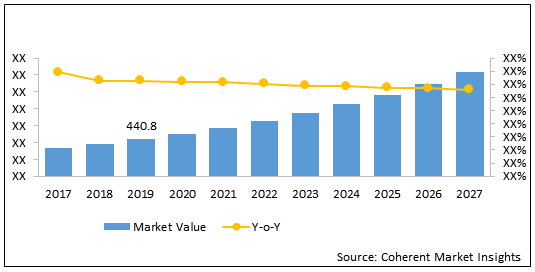 Microturbines are typically used in combined heat & power applications. Standby power application is expected to hold a dominant position in commercial use in the near future. This is to avoid losses occurring due to conventional power failure. Microturbines are mainly used in hybrid passenger vehicles. Growing environmental concerns combined with rising global warming and pollution levels are expected to boost the demand for combined heat & power.

Due to Covid-19 pandemic, several industries witnessed significant shift in their business. Microturbines are energy generation technology that is used for energy generation applications. Increasing demand for clean energy is driving the growth of microturbine markets. However, spread of coronavirus disease have a moderate impact on global microturbine systems market. The power supply industry going through hard phase due to the large collected dues that need to be paid to generators, uncertain revenue due to halting of residential and commercial operation and liquidity issues due to restricted cash flow and also having overall low power demand in the sector. Most of the countries have implemented lockdown, due to which there is ban on travel and businesses being shut down that cause obstacles in revenue generation. Further, disruption in supply chain and trade restriction have impacted overall production of the microturbine. Thus, in turn, decreases the demand for microturbine systems market in the future.

The value chain for microturbine systems covers all the stages of setting up these systems and its applications. A microturbine system comprises air bearings, generator, compressor, recuperator, fuel injector, combustion chamber, generator cooling fins, and turbine and exhaust outlet. All these sub-products are manufactured from procured raw materials such as steel, iron, oil and aluminum. The EPA (Environmental Protection Agency) continuously supervises the basic raw materials utilized in microturbine systems production. All the procured sub-products are assembled to form a complete entity. The products are designed and optimized according to requirement. High degree of vertical integration exists between product assemblers and original equipment manufacturers for instance Capstone remanufactures and sells sub components of microturbine systems for both replacement as well as new market. 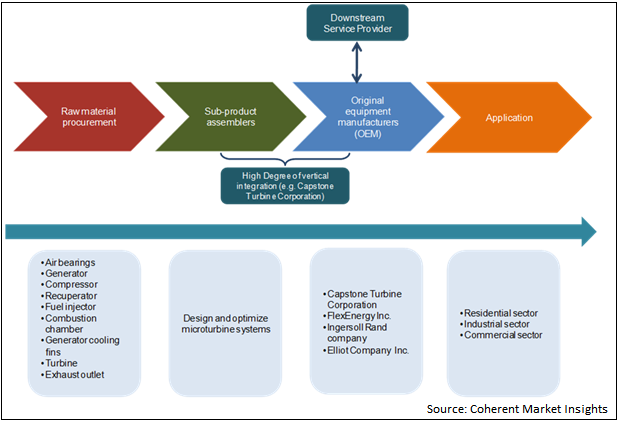 For instance, in May 2020, Capstone Turbine Corporation received an order to help modernize a water pollution facility in upstate New York

A microturbine is a combustion turbine that runs on gas fuel to power an electric generator. A microturbine uses natural gases and petroleum fuels such as diesel, kerosene, and etc. This type of turbine is used to generate power on small scale. Microturbines are capable of generating energy from 25 KW to 1000 KW. These types of turbines are compact, lightweight, and cost-effective and have minimal moving parts as compared to the traditional methods. This type of turbine is used in various applications such as combined heat and power (CHP), standby power, combined cooling, heating, and power (CCHP) and others. The majority of the applications of microturbines are in the industrial (mining, oil & gas, wastewater plants, and land rigs) and commercial sector (hotels, office buildings, schools, sports centers, supermarkets, swimming pools, and hospitals).

Increasing focus on the generation of clean energy is expected to drive market growth during the forecast period. During the last decade, there has been an increased focus on the generation of clean energy from unpolluted sources. Many climate-energy agreements such as the United Nations Framework Convention on Climate Change (1992), Kyoto Protocol (1997) have been enacted in response to the detrimental effects of global warming. The use of conventional fuel such as crude oil, natural gas contributes to the high amount of emission of greenhouse gases such as carbon monoxide and carbon dioxide. These micro turbines release a small number of gases in terms of concentration of nitrogen oxide and sulphur oxide as compared to fossil fuels. Several countries are phasing out nuclear plants and focused on achieving efficiency targets and emphasis on the use of clean energy that causes no damage to the environment. For instance, according to International Energy Outlook 2017, the world’s natural gas producers are expected to increase supply by 43.2% from2015 to 2039. Further, In Russia, the production of natural gases is expected to increase owing to the development of resources in the country’s eastern and arctic region.

Rising awareness related to clean energy can provide major business opportunities in the global microturbine systems market. The rising trend of clean energy has compelled the reduction of greenhouse gases and other emissions. Natural gas-fired power plants offer high-efficiency low-carbon characteristics, which can increase the demand for microturbine systems globally. Cogeneration of power and heat allow obtaining high-efficiency energy generation with significant primary energy savings. Key companies in the market can capitalize on such lucrative opportunities and gain a competitive advantage in the market.

Which are the key factors driving the growth of the Microturbine Systems market?

Which region held the largest market share in the Microturbine Systems market?

North America microturbine systems market is expected to generate the highest revenue during the forecast period.