North America among regions is expected to show dominant position in the global military aircraft market during the forecast period. This growth can be attributed to growing demand for specialized and advanced aircrafts and rise in spending on military in the U.S. and growing focus on modernization of military aircraft fleet in Canada to reduce its dependency on the U.S. Air Force for specific aerial missions. For instance, according to the Stockholm International Peace Research Institute (SIPRI), in 2021, the global military expenditure accounted for US$ 2.1 trillion.

Furthermore, Asia Pacific is also anticipated to witness robust growth in the global military aircraft market over the forecast period, owing to increasing focus on development of new aircrafts in countries such as China and growing defense spending in India. For instance, as per the SIPRI, the third-largest military spender around the world is India, after the U.S. and China. In 2020 the country spent US$ 72.9 Billion representing 2.1% increase from the previous year. 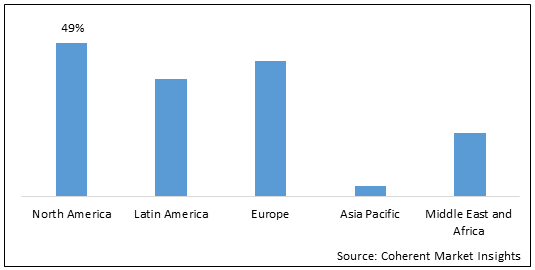 Increasing expenditure on military all around the world is expected to propel growth of the global military aircraft market over the forecast period. The configuration of international security systems are being undermined by increasing unilateralism, hegemonism and power politics due to increasingly changing international strategic landscape and this has led to various ongoing conflicts around the world. Thus, military spending around the world is increasing for improving security of the countries. For instance, as per the Stockholm International Peace Research Institute (SIPRI) data, there was an increase of 2.6% in the world military expenditure in 2020 compared to 2019, reaching US$ 1981 billion. According to the same source, the spending was higher by 9.3% than 2011.

Furthermore, growing importance of fleet expansion and replacement with newer and advanced aircrafts is also expected to boost growth of the global military aircraft market over the forecast period. Many countries are focusing on expansion and modernization of their aircraft fleets by obtaining new generation military aircraft. With increasing technological developments, these countries are improving their aerial support and combat abilities. Thus, increasing fleet expansion replacements of aircrafts is fueling the market growth.

The demand for air launched small satellites is increasing around the world and it is also anticipated to create growth opportunities for the global military aircraft market during the forecast period. For instance, in August 2022, the Indian Space Research Organization (ISRO) successfully achieved first flight of its new satellite launcher, the Small Satellite Launch Vehicle (SSLV). Thus, the market is likely to witness growth opportunities with increasing demand for small satellites.

Increasing development procurement of fifth-generation fighters is dominating the global military aircraft market. As the defense expenditure is increasing around the world, several countries are targeting large-scale procurement as well as development activities for fighter jets. The fighter aircraft market is growing due to increasing technological development in precision and stealth weapons. As all the countries want to keep their combating abilities updated, their focus on fifth- and sixth-generation fighter jets is increasing, and this trend is likely to continue in the market during the forecast period.

High cost of platforms resulting into leasing of aircrafts, and delayed procurement plans are expected to restrain growth of the global military aircraft market over the forecast period. Due to procurement and modernization of newer generation military aircrafts having all the necessary subsystems leads to high costs. Thus countries are delaying or canceling the plans of aircraft procurement. For instance, in September 2020, the government of Germany revealed cancellation of its plans for replacing air force’ Sikorsky CH-53s with either the Boeing CH-53K or CH-47F, owing to budgetary constraints.

Moreover, strict regulations for manufacturing of components of special mission aircraft is also a restraining factor that is likely to impede the market growth. The risk related to flight operations is why the aerospace industry has stringent regulations of manufacturing. The safety levels linked to special mission aircrafts operations are governed by regulatory bodies in countries around the world. Moreover, under the rules implemented by the International Civil Aviation Organization, all the components of special mission aircraft need to meet the regulatory requirements of the organization for ensuring the safety and control risks related to defective components. 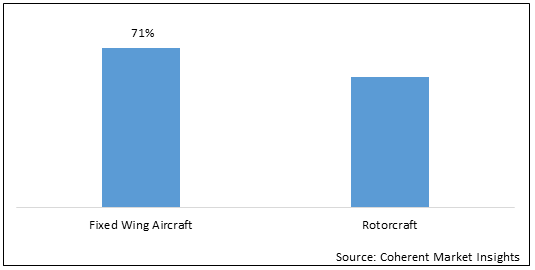 The global military aircraft market report is segmented into Aircraft Type and Geography.

Based on Aircraft Type, the market is segmented into Fixed Wing and Rotorcraft. Out of which, Fixed-Wing segment is expected to dominate the global market over the forecast period and this is attributed to the increasing defense budget for combat aircraft as well as rise in demand for air force fleet expansion around the world. In June 2022, The Indian Air Force announced that it is considering acquisition of 114 fighter jets, 96 out of which are likely to be built in the country and the remaining 18 would be imported from the foreign vendors selected for this project.

In November 2021, PZL Mielec, announced to have manufacture assemblies for global F-16 Program. The company revealed its plans of becoming a manufacturing partner for fighter aircraft programs, and starting from year 2022, the company will be staring to build components as well as assemblies for new generation F-16 Block 70/72.

In October 2021, the Japan Air Self-Defense Force (JASDF) received its first Boeing KC-46A tanker, which was the first delivery of the program outside of the U.S. The Japan KC-46A can refuel JASDF, the US Navy, the US Air Force and the US Marine Corps aircraft.

The global military aircraft market is highly competitive. This is attributed to continuous launch of new technologies due to ongoing R &D and efforts by value chain participants. Moreover, key players are adopting various business growth strategies in order to expand their presence on regional as well as global basis.

Growing arm races among countries, increasing need for replacement of old aircraft fleet with new generation aircrafts are the major factors driving growth of the global military aircraft market during the forecast period. In April 2018, Airbus entered into an agreement with Dassault Aviation for joint development and production of Future Combat Air System of Europe, which is planned to be complementing and replacing the current Eurofighter and Rafale aircraft.

However, high cost, stringent regulations and budgetary restraints adversely affect the market growth especially in regions such as Middle East.

Increasing expenditure on military all around the world is fuelling the growth of the market.

The Fixed-wing segment is the leading component segment in the market.

High cost of platforms resulting into leasing of aircrafts, and delayed procurement plans is the major factors restraining growth of the market.